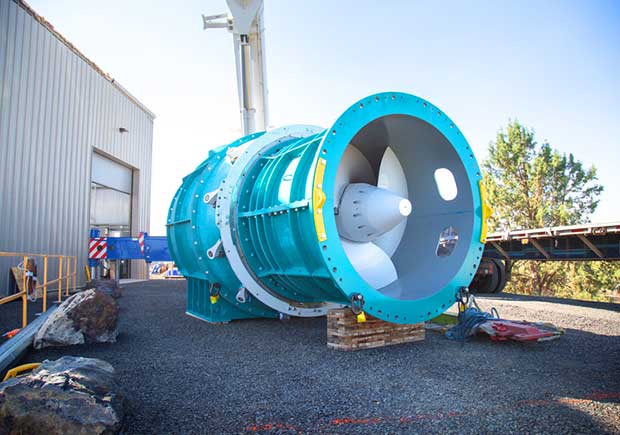 According to the German team, mortality at hydropower stations could be reduced if effective fish protection was installed. Mechanical fish deflectors, adequately installed fish ladders and descent aids, whose functionality must also be continuously checked and ensured, are required, they said.

There are numerous reasons why hydropower projects are often resisted by environmental groups. One of the most common issues with hydropower is the elevated mortality of fish caused by turbines. The chance of certain fish being wiped out increases as hydropower plants are often positioned in succession on a river, which is frequently the case. This is particularly dangerous because it can rapidly result in the demise of fish.

One study led by the Leibniz Institute of Freshwater Ecology and Inland Fisheries (IGB), one of Germany’s leading freshwater research institutes, was financed by Germany’s Federal Agency for Nature Conservation (BfN) using funds from the Federal Ministry for the Environment, Nature Conservation and Nuclear Safety (BMU), and the BMU. Small hydropower plants in particular, according to the study, are a major problem ecologically. The tiny hydropower plants in Germany with a capacity of less than 1 megawatt (MW) produce only 14% of the country’s hydropower’s 17.5 TWh/year of electricity. However, their contribution to a sustainable energy supply is minimal, but the damage they cause to freshwater ecosystems and fish stocks is comparatively significant, according to Dr. Christian Wolter, the researcher who led the study.

According to the German researchers, effective fish protection is necessary if mortality at hydropower plants is to be reduced. Mechanical fish deflectors, adequately installed fish ladders and descent aids, whose functionality must be continually checked and ensured, are required.

The RHT is a hydro turbine restoration project.

An Alameda, California-based hydro turbine developer and independent power producer, Natel Energy, has demonstrated that better hydro turbine designs might be the ultimate solution to the issue. The Restoration Hydro Turbine (RHT, Figure 1), a small hydroelectric turbine that combines high performance with safe through-turbine fish passage, has been developed.

According to Gia Schneider, co-founder and CEO of Natel Energy, if we can make it simple and safe for fish to move through hydropower facilities, we can reimagine hydropower as a whole, with these projects continuing to preserve river connectivity and passage,” a guest on The POWER Podcast said. “A fish-safe turbine is crucial to making this vision a reality.”

RHTs are well-suited for low head (2 meters to 20 meters) and do not require finfish screens. Thick, slanted blades transport fish away from the leading edge into wide interblade areas and downstream to the outlet, avoiding severe strikes and eliminating entrapment between moving and stationary parts.

The fish-friendly design has been tested.

The eel passage study (Figure 2) was recently published and recorded the results of the intense testing. Schneider, who has been working on eel passage studies, described the findings (Figure 2). “There have been some pretty extreme conditions involved,” she said, “and we’ve been able to document 100% eel passage through our turbines.” “Given that the eels are the same size as the turbine, and the turbines are spinning at 600, 700 rpm, we have some fairly large eels,” she said.

It is crucial to gather that type of data, Schneider said, because it provides corroborating evidence that it is really feasible to design for high fish passage and high energy production simultaneously. Natel has conducted several other studies, some of which were conducted with the Pacific Northwest National Laboratory (PNNL), and they yielded similarly impressive results.

Operation in the real world

Schneider is pleased with the performance of Natel’s three operating projects, all of which are in the U.S. and one in Europe. “We’ve been maintaining a 97% uptime on the Oregon project this year. It essentially ran itself for the water year and maintained a 99.5% uptime,” he said.

It is important to ensure that these assets operate reliably, Baranowski said. We’ve built turbines before, so we know we can build them. We’ve demonstrated that we can build them without harming fish or operating at high power levels, and now we have field operating data from the initial installations that shows that they are reliable and able to function as normal electrical generation equipment. Natel is planning to expand.