You’d be hard put to invent anything as singularly stupid as Corbyn’s spiteful and vindictive scorched earth policy as his grip is forced from the Labour Party. He, Milne and McDonnell have spent their term getting as many as possible of their own people into Labour’s key positions, and no doubt a new leader will find employment contracts impossible or hugely expensive to break. However, the absolute moronic icing on the stupidity cake is the suspension of Trevor Phillips on the grounds of preventing reputational damage to the party.

The May elections will be a test of how far Corbyn’s party have evicted the Trad Lab local government nexus in the heartlands. I’ve written before how I once knew well, liked and respected the old Labour culture in south Yorkshire. We share many values; a passion for fairness, equity, probity, transparency, stewardship, trust and democracy. Our beliefs are grounded in a moral absolutism that is Christian in character. We believe in merit, in the rewards of ability and application, and deprecate everything that Corbyn’s Labour stands for – privilege, nepotism, moral relativity, racism and discrimination, avarice, partiality, dishonesty, twisted political manipulation, bullying, stitch-ups and corruption.

Where the trad Lab people and structures are still in place, the Labour vote will hold up. Where the Corbynites have taken over, openings will be created – and we are starting to see the rise of new, Labour-replacement parties, locally focused, with no London blow-ins, party functionaries, remote from the Corbynista nomenklatura. Ieuan Joy in the ‘graph describes them as ‘microparties’. Of course my own party will hope to make inroads here in May – but trad Lab voters I know will be reluctant to vote for the local businessmen who will stand as Tory councillors in red wall country. Boris was different. These places are not Tory, though the voters are conservative. The mill owner and the landlord are still the enemies.

The hate parties and personalities will also seek to make inroads here in May, looking to exploit local tensions. Social media users will know that they have started their campaigns already. I have great confidence in the ability of local voters to dismiss them. They are rightly loathed every bit as much as Corbyn’s NKVD.

I used the meme below as part of a jokey dig at Labour in the December election, but after the voices in the media questioning, following the suspension of Phillips, just how nasty and authoritarian the metropolitan party can get, it will raise just a scintilla of real caution. It’s what parties such as the one Corbyn, Milne and McDonnell want to create can become. 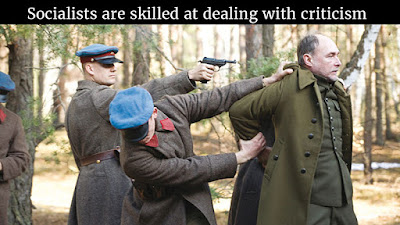 Source: http://raedwald.blogspot.com/2020/03/the-future-is-local.html
Before It’s News® is a community of individuals who report on what’s going on around them, from all around the world.