For any libertarian, the Chinese gangster regime is an anathema. Micro control of citizens, the extinguishing of democracy, suffocation of freedoms of thought, movement and expression, mass executions, organ harvesting, state-tolerated piracy, officially sponsored cyber crime, corruption, injustice and the endemic mendacity of one-party propaganda. And I can write that without a scintilla of hyperbole – we have actually grown to accept this monolithic behemoth and its manifold and hateful repression of the human spirit as normal.

Hong Kong is the possibly the first time in modern history that pro-democracy protesters have waved the Union flag not as a symbol of colonial oppression but as a symbol of hope and freedom, the symbol of every freedom that is hateful to the gangster regime in Beijing. There are some 300,000 BNO passport holders in HK and we must welcome the moves by the FCO to extend their rights to live and work in the UK from six months to a year, and to unlock for them an easy path to full citizenship and permanent residence. The success they have made of HK betokens their economic vitality, agility, tenacity and appetite for hard work and application. Our universities should be filled not with the products of the PRC and the financial control that has enslaved several Oxford colleges and Russell group institutions to Huawei, but with the children of the free entrepreneurs of HK. They would add immeasurably to the common wealth of our nation, strengthen the reach and status of the City of London and add dynamism, innovation and thrusting growth to our economy, in exactly the way as did the Ugandans expelled by Idi Amin.

Already Brexit is allowing us to return our view back to a perspective we had almost lost, to the Anglosphere. The joint UK / US / NZ and Australian approach to China’s moves in HK is absolutely crucial – in effect the Five Eyes nations confirming their solidarity. Boris’s thrown-out notion of a D10 – a group of ten democracies – formed of the G7 plus India, South Korea and Australia to challenge China on specifically 5G to start with but potentially much more, is a clever move to not only re-orient UK foreign policy away from Europe but to give Germany, France and Italy a thump to the head to divert their own focus away from their collective navels and out towards the world.

Above all we must rapidly re-engineer the economy to supplement or replace reliance on China for anything. Diversification. At a time when we will have, in six months, the capacity to allow British Internationalism to blossom – including our unilateral ability to impose sanctions, form treaties and alliances and so on, our place as the world’s fifth largest economy will not be insubstantial. In diplomatic terms we already box above our weight, and that ability will grow and mature as the FCO learns for the first time in forty years to think for itself.

China’s actions over HK could well blow-back at the gangster regime in more ways than one – and could be the dawn of a new era for a Britain free from the EU. 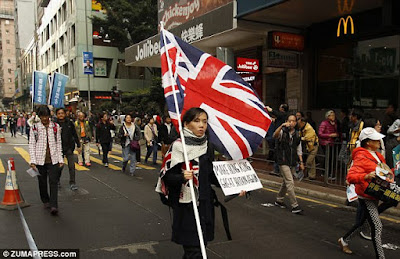 Source: http://raedwald.blogspot.com/2020/05/their-freedom-and-ours.html
Before It’s News® is a community of individuals who report on what’s going on around them, from all around the world.

Loading...
"Not by might, nor by power, but by my spirit, saith the Lord of hosts." Zechariah 4:6
BEFORE IT'S NEWS ON TELEGRAM
GET THE TELEGRAM APP - https://telegram.org/ JOIN OUR CHANNEL - https://t.me/BeforeitsNews
Read it..
BEFORE IT'S NEWS
SIGN UP FOR OUR NEWSLETTER
Today's Top Stories
Breaking: Thousands of Guillotines Pre-Positioned Across America For Left-Wing Terrorists to Execute Conservatives, Christians & Whites in the Unfolding Civil War! +Videos
Explosive! How Is This Still a Secret?! Military Insider Interview: Special Ops Revealed [DS] Hidden Secrets Pt 1
Jordan Maxwell: October Surprise (This Event Will Change the World Forever)
X22Report: Stand at the Ready, Fireworks, Backchannels Are Important, Tick Tock! - Must See Video
Look What's Coming, American Cities Are Becoming War Zones (Warning Graphic Videos)
Adrenochome in the MSM - The Heat is On!
Baba Vanga's Most Terrifying 2020 Prophecy!
This Is What They Have Planned Next!! The Big!! - Great Video
PREPARE NOW! | IT’S Happening All Over Again
Storm Is Upon Us!! - A Must Video
Loading...
Featured
X22Report: “We Have Entered an Important New Phase & Have Done So Sooner Than Expected”: Powell - Great Video
Truther Lambastes Establishment Over Covid-19. Couldn't Have Said It Better Myself! Finally Someone Has The Balls To Speak Up! Awesome 2 Minute Video!
Obama Brennan have most to lose, Barack Kenyan. Brennan traitor cauterized Obama passport data, Expected Hillary win, In panic mode, Citizen Wells FOIA revisited
Warning: Antifa Fascists Planning Nationwide July 4th Civil Disruption Events Across the Country as All Countries Matter Starts Trending
New World Order Fear Merchant Anthony Fauci Warns That ‘100,000 New Cases Per Day’ Of COVID-19 Coming Because States Reopened Too Soon
Wars Wars And Rumours Of Wars All Lead Back To The Rothschilds. Excellent Interviews Dr. Stan Monteith With Bill Cooper, Anthony Sutton &. Ambassador Smith. All Communist Revolutions All Lead Back To The Jewish Bankers On Wall St. And The 4th Floor Of The US State Department. Great Brother Of Darkness Video.
Breaking News Updates - Civil War in USA Dream + More 6-30-20 (Video)
Breaking: Man Shot After Protester Fires Handgun into SUV During Utah BLM Protest +Video
CDC Blows The COVID Narrative—Media Goes Into High Gear To Cover It Up Fast!
Southern History Series: George Fitzhugh on the Morals of Free Society
Loading...
Top Global
Where the Powerful Can Kill the Weak, as Long as They Pay
Wuhan now peddling dozens of tons of fake gold as well as viruses: Links 2, June 30, 2020
‘Your Papers Please’ – Mass Tracking starting in 15 Countries
China plagued by the some of the worse catastrophic flooding in 80 years
Health Watch: New virus with ‘pandemic potential’ found incubating in swine in China
Dr. Coleman: Our Govts Want Us Dead – The Denial of Hospital Care [VIDEO]
A 2015 scientific publication proves that scientists from the US and China collaborated to create a coronavirus that will infect humans – Dr. Peter Breggin
Jim Stone:- The Communist Revolution is Well Underway. (And too soon)
Be Prepared! This Is a Global War Unlike Anything We Have Ever Seen! - Great Video
Benjamin Fulford: Chaos Increasing in U.S. and Worldwide as Khazarian Mafia Desperately Struggles to Survive
Loading...
Top Alternative
Breaking News Updates - Civil War in USA Dream + More 6-30-20 (Video)
“Manipulating the Mass Mind & Attention”
A Most Sinister Plot! Are They Preparing the Ultimate Deception? - Must See Video
Armed Ken and Karen Trigger America – Four Things You Need to Know
4th of July Cruise Line Recipes
[WATCH] Social Distancing is a “CIA Protocol” That Amounts To Torture
Pathetic MSM Lies About Armed “White” St. Louis Homeowners Defending Against “Peaceful” BLM Protesters Who Were Threatening to Kill Them!
Despite the Surge in Coronavirus Cases in the US, Black Lives Matter Is Still Organizing Rallies, Marches & Riots!
What to expect for July 4th in the US?
Close to Half of All Working Age Adults in the United States Do Not Have a Job Right Now! - Must Watch Video