It turns out that greater and better qualified minds have been explaining the real reason for The Greenhouse Effect since the late 19th century, all to no avail. So it’s not like I can make any difference, so I’ll do one final blog post (I have been giving this a lot of thought while painting our kitchen cabinet doors last week but was too knackered to post anything) and call it a day.

A good place to start is at Tallbloke’s Blog. Some of the modern day proponents are moderate and sensible, others seem to be a bit unpleasant or borderline mad. Take your pick, but that doesn’t invalidate the explanation.

Suffice to say, the Consensus derides them all as crackpots or Science Deniers. All proponents have a slightly different way of explaining it, but it is of general application and explains so much that the Alleged Greenhouse Effect doesn’t and can’t.

What it boils down can be illustrated for Earth’s atmosphere as follows. Clearly, you don’t measure potential energy in degrees K, you measure it in Joules, but they are of equivalent value. Like somebody running a hydro-electric power station makes a trade off between “tonne of water up in the reservoir” and “kilowatt hours of electricity”. There is a trade off between kg’s and kWh’s and they add up to the same value (ignoring conversion losses/inefficiency): 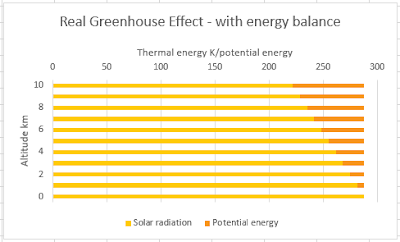 1. ‘Energy’ is just ‘energy’ and it can be stored or manifested in different forms, such as
- photons/radiation,
- kinetic energy (on large scale) or thermal energy (kinetic energy on a molecular scale),
- potential energy (height x gravity),
- latent heat of evaporation.
Those are the main ones we need to think about in terms of the atmosphere. There are others such as
- chemical energy,
- electrical energy,
- matter (which can be converted back to energy in nuclear fusion or fission)
but these are not so relevant here.

2. Energy can be converted from one form to another without overall losses. For sure, in any process some of your starting energy is converted to forms you didn’t want or can’t exploit, but that doesn’t apply when energy in the atmosphere swaps between thermal energy and potential energy, this is to all intents and purposes 100% efficient.

A good example of this effect being exploited is using spare/cheap electricity at night to pump water up into reservoirs (= potential energy). Then at times of peak demand, the sluice gates are opened, the water goes through turbines and generates electricity (potential energy is converted back to electrical energy), although this is not 100% efficient, in that some energy is lost to evaporation, vibration, heat/friction, sparks etc.

3. There are names for the processes when energy changes (or is converted) from one form to another. When a warm object cools down, it ‘radiates’. We ‘generate’ electricity by converted thermal energy, radiation or kinetic energy into electricity. We ‘use’ electricity to create light or heat. When plants convert solar radiation to chemical energy, it is called ‘photosynthesis’. We ‘burn’ things with stored chemical energy (wood) to create thermal energy. When thermal energy is converted to potential energy, we refer to this as ‘convection’ (truism ‘warm air rises’ is sort of correct, but ‘heat’ does not rise – that warm air cools as it rises) although unfortunately there is no word to describe the reverse process (for every bit of warm air that rises, another bit falls down and warms up).

For our purposes, we don’t actually need to worry about whether energy in the atmosphere spreads out/converts using conduction, convection, radiation or anything else – the final distribution or equilibrium will be the same. We don’t need to worry about how the energy gets into the atmosphere in the first place (mainly by solar radiation hitting the hard surface, the ocean surface or clouds; occasionally it’s a volcanic eruption or a meteor hitting it). That’s like assuming that the surface height of a lake depends on which ends is being rained on; or whether you pour in that bucket of hot water at the tap end of the bath or the other end.

4. Energy tries to spread out as evenly as possible.

This is easy if we are just looking at one type. If rain falls on end of a long lake, the water level in the whole lake rises evenly, or else the surface at the rainy end would be higher and have more potential energy than the sunny end. If you pour a bucket of hot water into a lukewarm bath and wait for a minute or two, the temperature of the whole bath will go up by the same amount.

But in the atmosphere, potential energy can’t be the same all the way up. This is the key to the whole thing. The top layer will always have the most potential energy and the bottom layer will have none. So energy does the next best thing and adjusts temperature so that the total energy of any molecule (thermal plus potential) is the same, which it is why it is so easy to calculate the lapse rate, it’s just the trade off between the two (on Earth, we have to adjust this down by one-third because of the latent heat of evaporation/condensation). Rather unsurprisingly, the average temperature of the atmosphere is 99.9% dictated by incoming solar radiation, and is what you would expect it to be from incoming solar radiation, but this thermal energy is not distributed evenly all the way up; there is more at sea level and less at the top of the troposphere.

Similarly, we can’t apply the simplistic gas laws that apply on a small scale and assume that temperature, pressure and density will even out in the atmosphere as they would within a sealed container. Pressure and density fall as you go up through the atmosphere, which is also down to the effect of gravity (you can of course ignore gravity on a small scale in a sealed container) so why shouldn’t temperature?

Which can be illustrated as follows:

——————————————–
This appears to me to be science denial on a grand scale, and ignores and/or can’t explain all the stuff we simply know and have reasonably good measurements for, such as:

- how clouds of hydrogen and helium gas contract to generate the pressure and temperature needed to kick start nuclear fusion;

- why there is a lapse rate on Jupiter or Saturn, even though their atmospheres are hydrogen and helium, which are officially not Greenhouse Gases (nitrogen and oxygen aren’t officially Greenhouse Gases either). Some astrophysicists consider Jupiter and Saturn to be failed stars – they are emitting more energy than than they receive from the sun, so must be gradually losing mass somehow;

- why the cores of Jupiter and Saturn are so hot, despite getting very little solar radiation and why the hard surface of Venus is so hot, even though it only gets 17 W/m2 solar radiation (about one-tenth of what Earth’s surface gets – Venus’ troposphere is heated from the clouds downwards using whatever the opposite of ‘convection’ is);

- why the top of the troposphere and hence the peaks of very high mountains are a lot colder than we would calculate from solar radiation alone (see chart above);

- why the troposphere emits twice as much radiation or thermal energy towards the ground than it does out into space. The troposphere at sea level is warmer and hence emits more radiation that the layer higher up, which is colder and so emits less radiation, full stop.

- why water vapour and clouds (taken together) can’t be a ‘greenhouse gas’, although this is based on observation as much as physics, which is really complicated.

- why the ‘greenhouse effect’ on Mars is barely measurable (no more than 5 degrees), even though there is twenty-five times as much CO2/m2 surface area as there is on Earth.

- why you can plot the Greenhouse Effect on Mars, Earth and Venus against the total mass of their atmospheres per m2 of surface and get a straight line, even though Earth’s atmosphere is only 0.04% CO2 and Mars’ and Venus’ atmospheres are > 95% CO2.

It’s all well and good having a theory or an explanation, but you have to be able to apply it to all the cases listed above and see whether they still hold. The kinetic-potential energy trade off explains 99% of all that without breaking a sweat. The Consensus have to invent all sorts of different explanations to paper over the cracks.
——————————————
If I had a few million quid to spare, I’d settle the matter once and for all by buying an old industrial chimney or cooling tower – the taller the better – sealing it at the top, painting it white on the outside and insulating it with polystyrene on the inside walls, top and bottom – and then just measuring the temperature at top and bottom.

We would have real fun with this – we could test the theory to extremes by cutting holes near the top and bottom (on the side that gets the least solar radiation) and installing fans to pump in/suck out air; we would install radiators and cooling pipes at the top and bottom and turn them on and off; we would pump out the air and re-fill it with a mix of 80% nitrogen, 20% oxygen and zero Greenhouse Gases (H20, CO2 or methane).

I am quietly confident that, whatever you do; after you have turned off the pumps and closed the holes; or turned off whichever radiator or cooling pipes you had turned on; and left the column of air alone for long enough, the lapse rate will re-establish itself and the column of air will be cooler at the top than at the bottom by about 0.65 degrees per 100 metres of height (or 9.8 degrees if you manage to eliminate water vapour).

The only interesting thing left to resolve will be whether it takes seconds, minutes, hours or even days for the lapse rate to be re-established. If it hasn’t happened after a week, if it’s warmer at the top or if it’s the same temperature all the way up, that’s still a few million quid well spent and I shall spend a few quid more on a nice hat to eat.

I just wonder whether The Consensus would be prepare to enter into a bet and pay the costs if the explanation is correct. And I’ll buy them a nice hat to eat as a consolation prize!


Source: http://markwadsworth.blogspot.com/2020/06/im-shelving-that-plan-for-book-on-real.html
Before It’s News® is a community of individuals who report on what’s going on around them, from all around the world.