How coincidental that the UK government have been using the word Tier
for Tiers 1, 2, 3, 4…From ‘good old’ Wikipedia: https://en.wikipedia.org/wiki/Aktion_T4
‘Aktion T4 was a campaign of mass murder by involuntary euthanasia in
Nazi Germany. The term was first used in post-war trials against
doctors who had been involved in the killings. The name T4 is an
abbreviation of Tiergartenstraße 4, a street address of the
Chancellery department set up in early 1940, in the Berlin borough of
Tiergarten, which recruited and paid personnel associated with T4.
Certain German physicians were authorised to select patients “deemed
incurably sick, after most critical medical examination” and then
administer to them a “mercy death”. In October 1939, Adolf Hitler
signed a “euthanasia note”, backdated to 1 September 1939, which
authorised his physician Karl Brandt and Reichsleiter Philipp Bouhler
to begin the killing.’

How coincidental that the UK government have been using the word Tier
for Tiers 1, 2, 3, 4…

This is basically a transcript of the testimony given by Jew Vera
Sharav via online camera and audio to German Reiner FuellMich.
Vera Sharav:
https://ahrp.org/vera-sharav/
https://en.wikipedia.org/wiki/Vera_Sharav

Noted phrases from the text are:
An undercover dictatorship
A chilling replay of T4
Masks are an insidious psychological weapon; the symbolic equivalent
of the yellow star
The final solution to the pandemic will be a vaccine
This Great Reset is the master plan

Today debate is forbidden. A doctor is not allowed to say that the
virus is being exploited to maintain a state of fear. Lock downs have
proved a very effective tool for social control. But, they failed to
change the course of the virus.
People are being conditioned to submit passively to government
dictates. Children who are deprived of an education, are being
conditioned to distrust people. Mandatory masks are an insidious
psychological weapon. They demean our dignity as free human beings.
They do not work in an epidemic and are the symbolic equivalent of the
yellow star. Study after study show lock downs destroy millions of
lives and livelihoods, throwing millions of people into poverty. Even
the Wall Street Journal has conceded that lock downs were not worth
the pain. However, for global oligarchs the covid pandemic has been a
financial bonanza. American billionaires increased their personal
wealth by $2.2 trillion, just in 2020. We can’t overlook the financial
incentive for lock downs that destroy competition or the local
industries in most cities that have gone bankrupt. We are supposed to
buy only from the large Amazons; this is planned. Doctors and
scientists who express views that challenge official dictates are
treated as heretics; they are threatened with loss of livelihood.
Anyone who questions the safety of vaccines that have been rushed
through Operation Warp Speed, is muzzled and vilified by the media.
These covid19 contacts are totally confidential. They’ve even used a
middle contractor who does things for the military, so contracts
cannot be acquired under FOIA; they are not in government custody. Why
the secretiveness? Why has the CEO of Pfizer tried to blackmail
Argentina and Brazil? Going to the extent of requiring them to give
them their military bases, their banks, to give insurance collateral,
why? What does he know in the data that we don’t know? No matter that
governments have given them immunity, but it’s not enough.
3hr 39mins 45secs
Bill Gates stated in 2020 that the final solution to the pandemic will
be a vaccine. This is a kind of Final Solution. To ensure compliance
with vaccines, governments have instituted unprecedented aggressive
measures. This primarily ensures a vigorous cash flow. They are
already talking about vaccines being required every year. They only
began the vaccination in December. What will profits look like at the
end of 2021?

Reiner Fuellmich: What is the ultimate goal?

Read The Great Reset. Klaus Schwab. Now it’s global. It’s to go beyond
Hitler. It’s about population reduction. That’s been the oligarch’s
goal since John D. Rockefeller. And power. Control. Technology today
is far superior to IBM’s punch cards. With this virus they are
instituting unprecedented oppressive and repressive elements that
imprison us in our homes; we’re being tracked, surveyed; Green
Passports are being used to apartheid class society; one class
privileged, the other reviled and discriminated against. Will ghettos
and detention camps follow and will people be killed? The Nazis used
tattoos, well now we’ve got invasive tracking technology, thanks to
Bill Gates who financed these things, including chip-tattoos.
This Great Reset is the master plan. As Klaus Schwab said, covid is a
marvellous opportunity to reset. Did any of us give informed consent
to a reset of the world?
The oligarchs already own government. It’s not the virus that’s the
problem. It’s the eugenics that’s the problem. That class believe they
are Übermenschen and we are all Untermenschen. Money of course, but
power is like a drug; there are people who are absolutely evil. They
do not recognise the human species as being one. Once you have this 2
class system, you will not prevent a global holocaust. And they can do
it remotely; click! Click! If we let them.

3hr 51mins 34secs
Schwab Family Values
https://www.youtube.com/watch?v=yDH0KGQD9vw
Nothing tells you about Klaus Schwab before 1970, until this…
https://unlimitedhangout.com/2021/02/investigative-reports/schwab-family-values/

It’s a continuum and protocol of how it’s going to work. They want to
control our minds. Government should not be interfering in our
personal lives, in our medical choices. I never thought I’d be alive
to be again afraid of the same elements. As a Jew persecuted under
that regime, I believe that you (Reiner), Germans, this generation,
must lead this fight. There’s a memory among Germans and we must plug
into that and this time around we’re not going to let them get away
with it.

3hr 56mins 54secs
Artists grasp things before the rest of us do. I’ll be talking about
this to people in Israel because that’s another target I have to deal
with.

Reiner: Lawyer Michael Swinwood is filing Class Action for children
only. This goes beyond what happened during the 3rd Reich; indigenous
people have always been the target of genocidal fantasy; it used to be
only the Indians, now we are all Indians.

Vera Sharav: The factions fighting each other, that’s all set up. BLM,
except in public health… those are to divert attention from what
they’re really doing.
Use the Nuremberg Code. The Helsinki Code is a little watered down,
but the Nuremberg Code can’t be changed. It’s like the 10
Commandments. The Nuremberg Code says you are a subject, not a
participant, and these are experiments, not studies. Language is
important, everything in public health is done in euphemisms.

Reiner: 100 years ago the Canadian and probably the American Indians
were used for all kinds of medical experiments. In the 1940’s in
Australia, they were vaccinating aborigines, using them as guineapigs.
From the start, I thought this is the worst ever series of crimes
against humanity. This is a global cabal. Probably no more than say
3,000 people who are at the very top of this. The oligarchs, members
of the churches…

Vera Sharav: Bill Gates started very early, to fund reporters,
journalists… what deal was made in 1995 between the US Justice Dept.
and Bill Gates? What got the Justice Dept. off his back?
Most young people fell in love with the technology; it’s addictive.
Can a child imagine a teddy bear, that it loves, is going to do
something against them? The accumulation of personal secrets.
One thing from Klaus Schab, in his own words:
“The pandemic represents a rare, narrow window of opportunity, to
reflect, reimagine and reset our world. Nothing will ever return to
the broken sense of normalcy that prevailed prior to the crises,
because the coronavirus problems marks a fundamental inflection point
in our global conjectory. What the 4th ındustrial revolution will lead
to is a fusion of our physical, our digital and biological identity.” 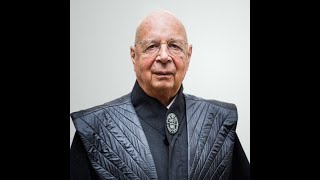 Who is Klaus Schwab? Investigation by Johnny Vedmore