‘They’ did a great job getting the vaccinations up and running in this country. When I say ‘they’, it is a heck of a lot of people. Think of the supply chain, from the people making the glass vials, the scientists brewing up and testing the stuff, the packaging, the lorry drivers, people running spreadsheets of what batches go where, renting (or requisitioning) suitable buildings and car parks, the nurses on rota, the car park attendants etc.

On the subject of batches, my first one was one of these. I actually vaguely remembered the batch number on the back of the card they gave me and recognised it straight away (funny how your memory works).

But they are now winding things up. The centre where Her Indoors and I got our jabs shut at the end of last week, and nationally, numbers are tailing off, from a peak average of 600,000 per day down to less than 200,000 now: 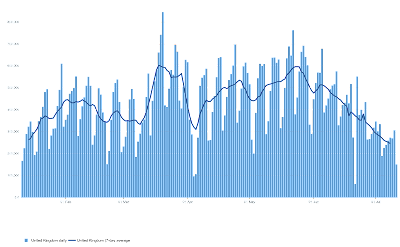 All of which puzzles me a bit, if they really want to open up on 19 July, they should be exhorting people to get their jabs ASAP, but they aren’t. They genuinely are leaving it up to people to decide for themselves.

With the benefit of hindsight, ‘they’ didn’t actually put much pressure on people to get jabbed, it just sort of happened. If Covid-19 had happened under New Labour, they would have been prime time TV adverts, hoardings, leaflets etc. When they were in charge, each advertising break on telly used to have at least one item of government propaganda (eat your five a day, renew your tax credits, shop an illegal immigrant, give up smoking, whatever). It also wouldn’t have been called Covid-19, obviously.

Final thoughts… in the UK (assuming Birmingham to be fairly representative of the UK), ‘white’ people and those in wealthier areas have a far higher uptake than non-white people (am I allowed to say that?) in poorer areas. Which makes no sense to me at all, the vaccines are ‘free’, for God’s sake, and people in poorer areas are more likely to catch it and/or become seriously ill.

Conversely, in the USA, the split seems to be between Republican voters (low uptake) and Democrat voters (high uptake). Unlike the UK, that does make a bit more sense; Republican voters don’t trust ‘the government’ and live in more rural areas; Democrat voters like bigger governments and tend to live in cities, where the infection risk is much higher because you are surrounded by people.

To sum up, a lot of this just doesn’t make sense to me. There’s nowt queer as folk.