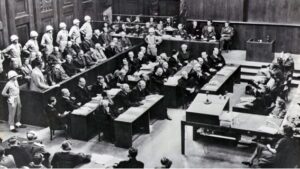 It is more than evident that a significant part of humanity is stampeding to take experimental vaccines for COVID-19. However, the “experimental” vaccines violate all 10 of the Nuremberg Codes, which carry the death penalty for those who seek to break these International Laws. Now, more than ever, we need new trials, not after the fact, as was the situation after WWII, but while the crimes against humanity are in progress.

Instead of these Nazis above the tables would be full of executives from Pfizer, Moderna, Johnston and Johnston, Dr. Fauci and the infamous Bill Gates, and many others. Even the politicians, who pretended to play doctor and healthcare official, promoting life-threatening and depressing masks, lockdowns, and death shots, should be held accountable. Dr. David Martin clearly shows that all of them are guilty of breaking American laws.

Front and center should be multiple members of the FDA and CDC, who are not trustful governmental agencies but richly paid whores for the vaccine companies.

American Heart Association Journal Publishes Data that U.K. Medical Doctor Claims are “Proof” that COVID-19 Vaccines are “Murder.” `We conclude that the mRNA vacs dramatically increase inflammation on the endothelium and T cell infiltration of cardiac muscle and may account for the observations of increased thrombosis, cardiomyopathy and other vascular events following vaccination.’

23 Nazi doctors were charged with conducting experiments on prisoners without consent, most at concentration camps. The aftermath of the trials led to creation of the Nuremberg Code, which the FDA and CDC do not follow. The Dr. Rath Health Foundation tells us that, “After six decades of silence, the historical records of the key war crimes tribunal that determined the responsibility for WWII were finally made available. Currently, history books teach that WWII was launched by a lunatic dictator, Hitler, and his ruthless Nazi henchmen.

However, tens of thousands of historical documents from the Nuremberg Tribunal – newly released online – unequivocally document that:

“The pharmaceutical industry does not act in the tradition of the protector of humanity, but in the tradition of I.G. Farben, a group of organized criminals willing to sacrifice countless human lives to maintain their profits,” writes Dr. Mathias Rath. Listen to him pleading in 2012 with his fellow Germans to not go down the same road that Germans have traveled twice before. He, too, claims that the two world wars were driven by the insatiable greed of the pharmaceutical and chemical cartels. The legacy of I.G. Farben is carried on by Bayer/Monsanto, Pfizer, and the other COVID vaccine companies.

Telford Taylor, US Chief Prosecutor at the Nuremberg War Crimes Tribunal against the executives of great I.G. Farben, wrote, “The crimes with which these men are charged were not committed in rage or under the stress of sudden temptation. One does not build a great war machine in a fit of passion nor an Auschwitz factory during a passing spasm of brutality. Their purpose was to turn the German nation into a military machine so it could impose its dominion on Europe and other nations beyond the seas. They were the warp and woof of the dark mantle of death that settled over Europe.”

The Nuremberg War Criminal Tribunal convicted 24 I.G. Farben board members and executives based on mass murder, slavery, and other crimes against humanity. Amazingly, however, by 1951, all of them had already been released and continued to consult with German corporations. The Nuremberg Tribunal dissolved IG Farben into Bayer, Hoechst, and BASF. Moreover, today each of the three daughters of I.G. Farben is 20 times as big as the I.G. Farben mother was at its height in 1944, the last year of the Second World War.

There are people on this planet that take pleasure in hurting other people. They injured others from sheer psychological habit. The general nature of ‘evil’ is not to have consciousness of the effect our actions have on the feelings and emotional world of others, which is the definition or defining characteristic of both psychopaths and sociopaths.

Dr. Russell Blaylock says that it was the Rockefeller Foundation that created orthodox Medicine back in 1901. “Rockefeller owned what was called the drug trust: that’s the major drug manufacturing firms all over the world: Merck Pharmaceuticals, Lederle, all of these pharmaceutical companies. And, of course, the aim was to remove all nutrition references to nutritional type treatments from the medical schools. They closed down half the medical schools in the United States. There were 165 medical schools at the time. Then he had his anointed medical schools, which he poured his money into, appointed the professors from his stock of professors. And so, they created an educational system that taught the things that he wanted to be taught. And therefore, every professor that came out of those programs taught the same thing.”

Dr. David Martin has been spending the past year and a half fighting to unravel what he says is the global criminal conspiracy of coronavirus. Parties include the American and Chinese governments, the International Monetary Fund, and Blackrock. Martin says these groups are guilty of criminal conspiracy in a terrorist plot against the American people.

Contemporary Medicine has been on quicksand for over 100 years, and as it sinks to the bottom, it is pulling down with it millions of humans into misery and death. We have known for a decade, thanks to the work of  Dr. Gary Null, Dr. Carolyn Dean, and Dr. Barbara Starfield, that properly prescribed pharmaceutical medications are killing over 100,000 Americans each year.

James Howard Kunstler writes that modern Medicine is a hostage racket; “Medicine is now a catastrophe every bit as pernicious as the illnesses it is supposed to treat, and a grave threat to a nation that we’re supposed to care about. If you thought banking in our time was a miserable racket — which it is, of course, and by “racket” I mean a criminal enterprise — then so-called health care has it beat by a country mile, with an added layer of sadism and cruelty built into its operations.”

It Is Worse Than All The Above

Dr. Wolfgang Wodarg, former head of health at the Council of Europe, explains that a pandemic used to be associated with widespread severe illness and death, but by changing the definition, removing the severity and high mortality criteria, World Health Organization (WHO) can now make a pandemic whenever it wants. One of the most respected men in Europe, he maintains that the “World Health Organization is an institution of corruption.”

“The scientific data overwhelmingly shows how probably millions have died from the covid injections, and hundreds of millions are suffering crippling side effects that often permanently disable the victims for life. The Vaccine Death Report provides all the data, along with hundreds of references, for further investigation.”

At the above link, one must scroll down to the first video but be prepared for a shock as the entire world’s elite are exposed for who and what they are, what they own,  and what they have planned for most of the rest of us. Naturally, after watching, one is tempted to run and hide, but in the end, courage is encouraged.

It will be a miracle if the 99 percent of us persevere against the elite, the Deep State, the three or four companies that seem to own most of the other mega-corporations. Add God into the equation, add truth, reason, insight, and love for each other, and perhaps a much-needed miracle will occur.

I also recommend a video exposing the lies and stupidity of Gates, Fauci, Biden, the head of the CDC, and Biden, who cannot make up their minds about what is true or not about COVID vaccines.

About 47 million adults in the U.S. remain unvaccinated, according to figures from the Centers for Disease Control and Prevention.

A Judge Stands up to a Hospital: “Step Aside” and Give a Dying Man Ivermectin.

A Chicago-area judge saved a grandfather’s life with the single question that exposes hospitals blocking doctors from using a safe, FDA-approved drug: Why?