1. Some terms are being kicked around that matter, and one confuses the other. Let’s start with what is actually going on. Trudeau is part of a Maoist mass line narrative attack.
This is where a leader tries to pit and incite one segment of the culture against the other with the intent of destroying the entire culture. It was after all, a big part of Mao’s cultural revolution, or a war on the culture.

The above video is a rather clear example of how this is played. Trudeau creates problems, in this case lack of freedoms and privacy, and blames it on those disobedient to his diktats.

Flash forward to this past couple of days and check this out. Canada watchers may remember Trudeau’s former right hand man, Gerald Butts. The article linked busts him for a version of the exact same thing using the Trucker convoy. Now, the Trudeau strategist is trying to pit Western Canada against East. The facts though, is that another convoy of Trucks appears to be headed for Ottawa from the East side of Ontario, intending to meet up with the Western one next weekend in Ottawa. CBC however, is reporting that its a small convoy ironically driving the roads of BC to complain about the unsafe conditions of the roads in BC. If that’s true, lets hope they are denied entrance to a hospital if they have an accident. After all, they are deliberately doing something unsafe for political reasons. Right vaxx mandaters?

As for Gerald Butts, he is only one of the Marxist revolutionaries advising Trudeau. Mark Carney is another, and ANYONE who has not read this article on him, is deliberately blinding himself to the facts in Canada if they do not read it.

2. They did more than support. They KNEELED. But so glad Ezra pointed this out. For anyone who thinks the police should not have an opinion on this protest, remember where they stood on BLM when they were burning down cities and attacking police stations and government buildings and even creating “autonomous zones” which is the definition of insurrection and sedition.

But let us remember this from Victoria BC not too too long ago at all: 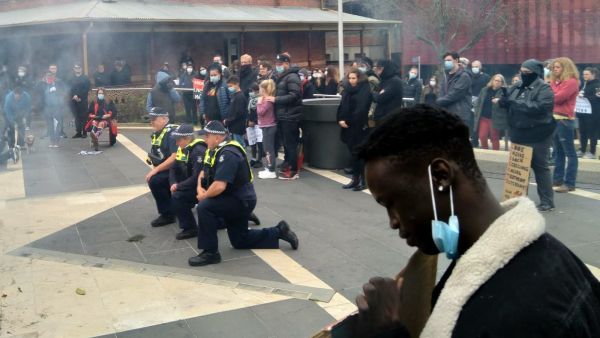 So keeping with the theme, not so much of this post as with the past x number of years, ANYTHING which aids the revolution against classical civilization is not just permitted, but celebrated, rewarded and funded. Anything which is counter-revolutionary is punished, criminalized, taxed and fined. When you allow yourself to examine events with this filter, everything fits, everything makes sense, and it becomes easy to predict the future at beyond the queasily intuitive level.

3. AN URGENT WARNING: The world’s most mRNA vaccinated countries now have shockingly high Covid infection rates. Hospitalizations and deaths are rising fast too. The mRNA experiment needs to stop. Immediately.

Something is rotten in Denmark.

Where nearly 1 percent of the entire population just tested positive for Covid.

You read that right.

On Saturday, Israel had 84,000 new infections, the equivalent of almost 3 million in the United States. Infections in Israel have risen unthinkably fast since late December. They’re are up 100-fold in one month, driven by the collapse of booster protection and the arrival of the Omicron variant.

Israel is not alone. Denmark reported 42,000 cases yesterday, equal to almost 2.5 million in the United States. France, the second-largest country in Europe, reported the American equivalent of about 12 million new infections in the last week. Australia had a tremendous surge in cases earlier this month, though it seems to be subsidizing for now.

Thank you CBC BS., Johnny U., ET., many people who emailed me anon, ANTI-MSM and so many more. Its gonna be an interesting week. Stay tuned. And support those who fight for freedom, not just for themselves but for all of us. And BEWARE of the Ray Epps. There is little doubt our revolutionary PM is planning a false flag event to destroy us as a people and our liberties. If you see anyone instigating an act that the CBC can pretend is violent, much like January 6 2020 in the US, Surround him and isolate him and chant FED or Ray Epps! This is no joke. It will happen and CBC may even have picked the actor themselves.