1. CTV does uncharacteristically fair video about upcoming trucker’s protest. I do question their numbers. A dozen transports? I think it’s several hundred. They also do that illusion of balance in this report, but its a balance that is missing in every government edict and restriction and fiat diktat which remove our democratic and constitutional rights. But there is an extraordinary moment in it. Watch the segment at 55 seconds where Stephen Laskowski, president of Canadian Trucking Alliance seems to be reading a statement. And in that statement, he says they shouldn’t do this because the regulations will not change. A truly stunning thing for a union boss to say. And a total admission that like the Australian construction union, and probably most unions now, it is about the shift to communism and less than nothing to do with Worker’s rights.

2. VERY hard to know what is true. But this is an interesting tweet from a known source:

If your a restaurant owner in the Ottawa area and you’ve been scared to open your doors to full capacity, do it this weekend. ???????? https://t.co/DBBaQagLbG 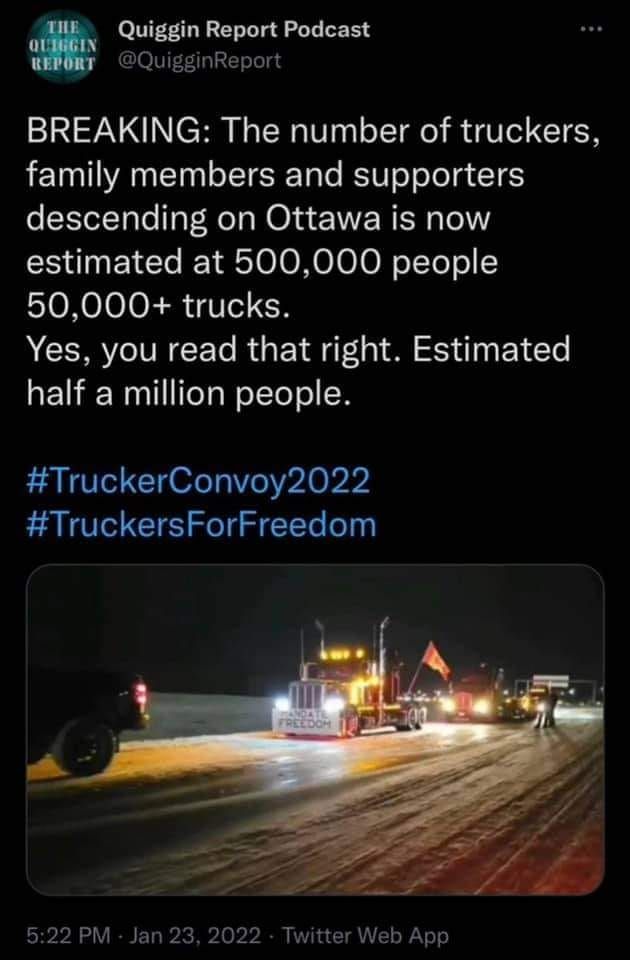 This could be a major event and a historical one for Canada. Let’s see how Trudeau plans to play it. Chances are he goes on vacation. Also I hear from multiple sources that Canadian highway cams are suddenly mysteriously offline. This suggests that Canada is planning the full Winston Smith on this. To hide the event, whatever its magnitude is in reality, altogether. But then you wonder about the empty shelves.

4. Convoy to Freedom in Medicine Hat Day 2 of the convoy

(Looks like more than a dozen trucks to me. CTV really needs to hire someone who can count higher than 12.)

(NO description of ANYTHING that might offer motive. “A long barrelled firearm”? So, AK47 then I’m guessing.)

Dozens of people have been injured after reports of gunfire near a university in Heidelberg, Germany.

The area has been cordoned off and police and rescue workers are at the scene.

They had earlier asked people on Twitter to avoid the Neuenheimer Feld area of Heidelberg, where the city’s university is located.

Police did not specify how many people were wounded or how seriously.

They said the weapon used in the shooting was a long-barrelled firearm.

Heidelberg is located south of Frankfurt and has about 160,000 inhabitants.

Its university is one of Germany’s best-known.

An initial statement by the police says: “Large-scale deployment.

“The perpetrator himself is dead.

“Police and rescue workers with strong forces on site.

“We will keep you updated as soon as more details are known.”

Thank you M., Rachel L., EB., Johnny U., PC and so many more who are working on helping us all make sense of a collapsing reality.