ER Editor: And out of the blue comes another hyped up disease. With vaccines to follow, naturally. Below we’ve put together a couple of articles on what it is, and why it is likely being hyped as a form of distraction.

Meanwhile, here are some other takeaways on the topic. Found mostly in Africa, as is explained below, one expert doesn’t understand why cases are suddenly cropping up in western countries. See African scientists baffled by monkeypox cases in Europe, U.S. Of note:

Scientists who have monitored numerous outbreaks of monkeypox in Africa say they are baffled by the disease’s recent spread in Europe and North America.

Cases of the smallpox-related disease have previously been seen only among people with links to central and West Africa. But in the past week, Britain, Spain, Portugal, Italy, U.S., Sweden and Canada all reported infections, mostly in young men who hadn’t previously traveled to Africa.

France, Germany, Belgium and Australia confirmed their first cases of monkeypox on Friday.

One of the theories British health officials are exploring is whether the disease is being sexually transmitted. Health officials have asked doctors and nurses to be on alert for potential cases, but said the risk to the general population is low.

Nigeria reports about 3,000 monkeypox cases a year, WHO said. Outbreaks are usually in rural areas, where people have close contact with infected rats and squirrels, Tomori said.

Smallpox vaccines have been used to protect against this rare problem, according to the article below. And on this topic, Dr. Paul Alexander has this to say on his substack account:

Smallpox vaccine to prevent monkeypox could cause global smallpox (variola) epidemics; I warn, do not be that stupid, understand you have damaged the immune systems of m(b)illions with COVID vaccines


Experts are saying the smallpox vax 85% effective in monkey pox; this is NOT good news, for millions/billions are now immunocompromised from COVID vax; smallpox vax, potential re-introduction smallpox

A critical statement to set the table:

“Increasing the number of vaccinated persons will inevitably lead to increases in morbidity and mortality due to vaccinia, and current evidence suggests net harm would result if smallpox vaccine were made available to the general public on a voluntary basis.”

So far, 87 cases have been confirmed worldwide and 57 are under investigation, according to the World Health Organization.

Remember a global pandemic being called for around 100 Covid cases? Nigeria gets around 3,000 cases per year and they simply deal with it.


One Case in the US Gets Enormous Media Attention

I love reading news and I know that I tend to be too alarmist. Thus, the recent monkeypox talk, that is all over the liberal press and Twitter, piqued my interest.

Is there a new terrible pandemic coming? Will it kill 10% of our population? Do we need to trust science, as always, and urgently inject ourselves with a recently developed “monkeypox vaccine”, that is definitely safe and effective? Should we forget Covid vaccination lies and abuses, endless illness among the boosted, etc, and again look at “health authorities” as our saviors, swallowing every word?

Or, perhaps, this is just noise and the media trying to distract us from something? Is someone paying off the media to sell us a new concern and new “treatments”?

Monkeypox is Not Endemic to Humans and is Not New

Read this excellent article written before 2022, about monkeypox. Monkeypox is a virus with some genetic similarities to smallpox, that has somewhat similar presentation to smallpox through pus filled pustules.

It is not easy for humans to get infected with monkeypox. It is an animal disease, present among African rodents and other animals, that usually requires close human-animal contact to establish transmission. Thus, it is usually confined to rural Africa where people contact wild animals or butcher bushmeat.

Transmission of monkeypox is usually by direct contact with infected animals or possibly by eating poorly cooked meat from an infected rodent or monkey. Cutaneous or mucosal lesions on the infected animals are a likely source of transmission to humans, especially when the human skin is broken due to bites, scratches, or other trauma — are a likely source for virus infection. Human-to-human transfer, probably by infected respiratory droplets, is possible but is not often documented. One study suggested that only about 8%-15% of infections occurred through human-to-human transmission among close family members.

There were numerous outbreaks of monkeypox in the past, all receiving scant attention from the press.

How bad is the current monkeypox outbreak in the US? Only one person in the US was diagnosed with monkeypox as of May 18, 2022. (Read this again) Despite that, dozens of news articles in the corporate press were devoted to monkeypox and this one case.

Monkeypox is Still not Easily Transmissible

Provoking the ire of the LGBTQIA community, UKHSA reported that most of the several UK cases of monkeypox occur among men who have sex with men. While we should equally care about all citizens regardless of their sexual proclivities, the fact that monkeypox is confined to a specific sexual community suggests that there is something in that community that enables the (extremely limited) spread of monkeypox, but at the same time, it proves that monkeypox is still not airborne and does not spread between randomly chosen persons. 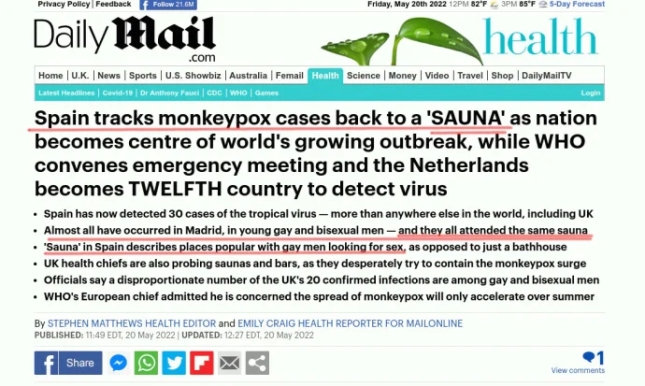 What could facilitate the spread of monkeypox among gay men? I do not know. As most past monkeypox outbreaks were associated with rodents, we first need to see if these men shared or used any rodents or had them as pets or some such.

Past Outbreaks of Monkeypox were Not Hyped Up

In 2003, 71 persons in the US were infected with monkeypox. That incident was also rodent driven, had very limited human-to-human transmission, and fizzled out as soon as it was identified and the rodents were taken care of.

This incident deservedly received very little coverage, mostly in the local press, and was forgotten as soon as it ended.

Despite literally zero indication that monkeypox deserves as much media attention as it receives, it could somehow become the next global plague just because anything is possible. Despite knowing that anything is possible, I see nothing concrete in this monkeypox talk other than a concerted media attempt at bringing attention to a topic that almost nobody should care about.

I was one of the numerous other people who realized that Covid-19 will be a global disaster in January 2020. I bought food, toilet paper etc, and had all money in cash (other than Berkshire Hathaway I never sell). I majorly shifted money into stocks on April 24, 2020, because I thought that we will get through Covid. To add something, I sold stocks too early in late 2020 due to overpricing concerns, and I do not normally trade to time markets. I am not and never was a market timer who would trade more than once a year or so. It was just a one-time deal due to the unusual Covid pandemic that I started following closely. This is just to say that I am trying to be realistic and have money on the line.

As of this day, May 18, 2022, I believe that monkeypox will not be the global disaster of the future. If I may predict what will, it is VAIDS and Chronic Covid and numerous economic dislocations and geopolitical problems, and endless war. (I do not try to predict bioterrorism such as Sars-Cov-2 because it is unpredictable). The bottom line is, bad times lie ahead, but monkeypox will remain a historical footnote.

To clarify, despite likely seeing bad times ahead, humanity will heal, thrive, and continue on, perhaps experiencing a population reduction that will not end the human race.

What is the reason “monkeypox awareness” is now promoted? I have no idea and I am willing to just wait until we find out. It could be:

My article is not attempting to prove a conspiracy theory about why exactly monkeypox is so elevated in the news coverage. I just want to point out that it does not deserve to be in the news so much.

What do you think? Who benefits from this monkeypox business?


The World Health Organization (WHO) is reportedly convening an emergency meeting as more and more countries discover cases of rare monkeypox. With the US government already buying up a potential vaccine against the disease, here’s what we know so far. […]

Danish pharmaceutical firm Bavarian Nordic manufactures a combined smallpox and monkeypox vaccine. The shot, named Jynneos, was approved by the US Food and Drug Administration in 2019, but has only been approved in Europe for immunizing against smallpox.

A day later, the pharma firm announced that it had secured a contract with an “undisclosed European country” to supply the vaccine (known in Europe as Imvanex) for off-label use against monkeypox.

Should the vaccine be given out to the public, health experts in the UK have suggested that gay men could be offered the jab in a “targeted rollout.”

Doesn’t this all sound familiar?

Those paying attention to the news may note that the governments of the world recently toyed with the scenario of a global monkeypox pandemic. In a simulated exercise held last year, the Nuclear Threat Initiative (NTI) and the Munich Security Conference modeled the spread of “a deadly, global pandemic involving an unusual strain of monkeypox virus” that resulted in “more than three billion cases and 270 million fatalities worldwide.”

In conclusion, the NTI called for more power and funding to be given to international organizations like the UN and WHO, and advised governments to react to potential outbreaks by granting themselves emergency powers and mandating social distancing and mask wearing.

Vaccine evangelist Bill Gates has also repeatedly warned of a potential smallpox pandemic, and called for a “global pandemic task force” to be set up in advance of such a scenario. Meanwhile, health ministers of the G7 nations are currently holding a mock pandemic exercise in Berlin simulating a “leopard pox” outbreak, while simultaneously discussing the monkeypox outbreaks.

Published to The Liberty Beacon from EuropeReloaded.com

Monkeypox: What Are They Trying to Distract Us From?