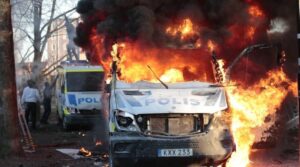 Almost All 5,000 Gang Members In Sweden Are Either 1st- Or 2nd-Generation Migrants
June 30, 2022 By Denes Albert of Remix News

The urban crime gangs dominating Swedish cities are almost exclusively made up of immigrants, according to Amir Rostami, a leading criminologist and professor who based his findings on police data.

In Sweden, the number of gang-related crimes is increasing every year, and as a result of mass and uncontrolled immigration, the authorities are losing control over more and more areas where migrant gangs are taking power.

“It is not enough for many immigrants to come to Sweden from a less developed country and enjoy the benefits. They want excitement and want to get rich quickly,” says criminologist Rostami.

Rostami has divided these gang members into two categories. Disorganized criminals are mostly made up of slightly younger members between 20 and 25 years old who have poorer impulse control, less education, and are primarily dealing with weapons and drugs. Then, there are the slightly more mature, rational, and better educated members who are involved in more extensive criminal networks; some of these members are even accountants, people with degrees, and former military personnel. This group is responsible for a huge share of crimes in Sweden, suspected of committing 40,000 criminal acts every year. These criminal networks not only compete with each other, but also work together.

Rostami sees himself as an example of someone who chose another life. He was born in Iran, came to Sweden with his family as an immigrant, and grew up in the Frölunda district of Gothenburg, which is now considered to be a “sensitive area” where large immigrant populations live. He said his upbringing was fraught with the risk factors of becoming a criminal, but instead of taking the path of crime, he chose to study, according to the Hungarian news outlet Magyar Nemzet.

Regarding migrant gangs, the criminologist highlighted that the business is passed down within the family. He said that fathers and other relatives teach young males in the family to commit crimes. Rostami argues that it is an almost insurmountable task for society to bring these individuals into a crime-free way of life and requires far more resources than are available or can be reasonably allocated to the task.

Police estimate that the number of people active in gang crimes in the so-called “sensitive areas” exceeds 5,000, of whom almost a 1,000 live in Gothenburg. According to Swedish police, almost all registered criminals have an immigrant background.

It is estimated that in about 15 years, each immigrant criminal will cost taxpayers an average of 25 million króna (€2.35 million) over the migrant’s lifetime. This represents a total financial burden of SEK 125 billion króna (€11.7 billion) for society. A shortfall in taxes paid to society, to which these people would have contributed if they had chosen an honest life over crime, must also be factored in.

According to Rostami and police records, all of the country’s convicted gang leaders are first- or second-generation migrants. Twelve of them are still serving their prison sentences, and one of them is on the run and hiding.