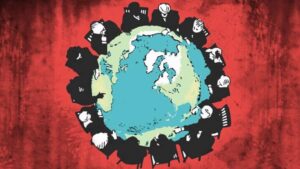 The only question remaining is, “Who will control you?” After the Great Reset, if it gets that far, you will own nothing, the global common trust will own everything, the central banks will have a 100% monopoly on money and you will be thrown into the Metaverse for whatever enjoyment might remain. Say “No” while you still can. ⁃ TN Editor

The idea of the Great Reset derives from the New World Order which is still alive in the minds of the establishment or who we can call the globalists from people like Henry Kissinger to the current US president, Joe Biden.  Of course there are many others on the top levels of the pyramid whose ideas range from establishing a police state, to implanting microchips the day we are born to track and trace us, to depopulating the planet.

I know it all sounds insane but that’s what the globalists have planned for us for a very long time.  Klaus Schwab’s protégé, Yuval Noah Harari, is an Israeli born intellectual who authored a popular bestseller titled ‘Sapiens: A Brief History of Humankind’ and is also a professor of history at the Hebrew University of Jerusalem.  Harari once asked a disturbing question, “what to do with all these useless people?”  Harari is an intelligent man, there is no doubt about that, but his intelligence has led him to the level of insanity.

Harari is an influential member of the World Economic Forum (WEF) who supports the idea of creating a dystopian society managed by a handful of globalists who will rule over every human being on earth from the day they are born.  According to Harari, planet earth is overpopulated:

Again, I think the biggest question in maybe in economics and politics of the coming decades will be what to do with all these useless people? The problem is more boredom and how what to do with them and how will they find some sense of meaning in life, when they are basically meaningless, worthless?

They also want people to stay home connected to the Metaverse world, a virtual reality simulation and at the same time get them addicted to all sorts of drugs.  The kind of world they are trying to create for us is pure lunacy.  Wired, a monthly magazine describes the metaverses as a combination of the digital and physical worlds that creates a virtual reality as in the Hollywood film, ‘Ready Player One,’ The article ‘What is the Metaverse, Exactly?’  answers that question, “Broadly speaking, the technologies companies refer to when they talk about “the metaverse” can include virtual reality—characterized by persistent virtual worlds that continue to exist even when you’re not playing—as well as augmented reality that combines aspects of the digital and physical worlds.”

Many other Hollywood films that are based on virtual reality in the future includes Jumanji, Source Code, The Matrix, Total Recall, Inception, and many others.  The globalists want you to believe that a dystopic society is in the works for us, but no worries, you will be completely happy at least according to Klaus Schwab.  In my opinion, the notion that the human species will be living their lives through virtual reality is far-fetched, it’s an illusion that will take decades even centuries to accomplish and that would only happen if we allowed it to happen.  Harari is saying that under a scientific, technocratic world order, the state will be your sole provider for everything, so basically, he says that families are not needed in this new world they are creating for us, in other words, having a family will be a thing of the past:

Rahm Emanuel worked for US presidents Bill Clinton and Barack Obama under various titles, but one quote he will always be remembered for was when he said “you never let a serious crisis go to waste. And what I mean by that it’s an opportunity to do things you think you could not do before.” That is exactly what happened under the Covid-19 global health emergency.  Klaus Schwab, who is the original founder, and executive chairman of the WEF published an article that outlines three basic components of the Great Reset titled ‘Now is the Time for a ‘Great Reset,’ in the first component, they would help steer or “improve coordination (for example, in tax, regulatory, and fiscal policy), upgrade trade arrangements, and create the conditions for a “stakeholder economy.”  How would this work? There are more than 195 countries in the world meaning that all these countries would have to establish a “unified” tax, regulatory and fiscal policy, all in sync, all with the same laws and that would be impossible even if they tried because all countries have different tax systems, different economies and cultures and that will not change because of a handful of globalists with outlandish ideas of a unified financial system they want to control for their own benefit.  It’s a ridicules idea.  In fact, more countries today are more open to imposing less taxes and regulations to attract foreign investments to grow their economies, so the WEF ‘s recommendations will never work, in fact its dead-on arrival.

Then there is the looming financial crisis that can ultimately force the world into a Federal Reserve Bank “Digital Currency” known as central bank digital currencies (CBDCs) that will be tracked by the government on how you spend your money.  What can go wrong with this idea?  If in any case, you are not politically aligned with a particular party or refuse an experimental injection, then the government may block your transactions.  In other words, they can literally control when and how you spend your money and that is something most people will not accept.  An article published by Stefan Gleason who is an investor, political strategist, and grassroots activist wrote an interesting analysis last year for fxstreet.com titled ‘The Great Reset is Coming for the Currency’ asks what will be the next major issue for a Global Reset? “As the Great Reset proceeds from globalist think tanks and technology billionaires to allied media elites, governments, schools, and Woke corporations, what will be “reset” next?  The next reset will most likely take place in the financial sector as “Supporters of the World Economic Forum’s all-encompassing Great Reset agenda are eyeing BIG changes for the global monetary system.”  Biden’s Treasury Secretary and former Federal Reserve Chair, Janet Yellen wants to end the use of various cryptocurrencies and have the International Monetary Fund (IMF) issue CBDC’s.  “Yellen derided Bitcoin as “an extremely inefficient way to conduct transactions” because “the amount of energy consumed in processing those transactions is staggering.”  Gleason says that Yellen and her colleagues are planning to have the public use digitized tokens issued by the central bank.  The bottom line is that “They just want to make sure those digits are issued and controlled by governments and central banks.”

The best way to avoid the Federal Reserve bank’s control over your finances is to own gold, silver, and other safe-haven assets.  “Anyone who is concerned about the prospect of being herded into a new digital currency regime should make it a high priority to own tangible money that exists outside the financial system.”  Gleason makes the case for owning gold and silver, “No technology or government mandate can change the fact that gold and silver have universally recognized, inflation-resistant value.”  At some point, the public will reject the Federal Reserve and its ‘digital currency’ if they can avoid it.  However, the best way to bypass CBDC’s in the future is to buy gold, silver, and other metals that that can maintain value and become resistant to inflationary pressures.  An important note to consider is that all US silver coins that were produced before 1964 were minted with 90% silver and 10% copper, so keep an eye on your pocket-change just in case you come across some silver coins with value.

The Great Reset And Its ‘Final Solution’ For Useless People