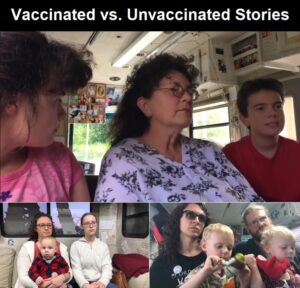 In May of last year (2020) we published an article titled:

These videos were filmed by Polly Tommey, the producer of VAXXED II, and were on their YouTube channel, which has now been scrubbed from the Internet.

So when a reader alerted us to all the missing videos from that article, I spent the past weekend retrieving them from our archives and uploading them to our Bitchute channel, and our Rumble channel.

Remember, these were filmed before any of the COVID experimental shots were issued EUAs, so these are the experiences of families who trusted the CDC’s vaccination schedule for childhood vaccines.

“Vaccines are safe and effective.” “The science on vaccines is settled.”

These statements are the official dogma of Big Pharma and the U.S Government health agencies, and anyone in the corporate media who has ever tried to challenge these statements of belief has been quickly silenced.

Yet even to the casual reader with no invested interest in the topic, it would seem fairly obvious that these are statements of faith, and not scientific statements.

How can a pharmaceutical product always be “safe and effective”? And how can the science on anything, let alone vaccines, ever be “settled”?

And yet these beliefs are put forward as facts, and all dissenters, or even just those who dare to ask a question, are censored or labeled as “anti-vaxxers” or “quacks” if they happen to be a doctor or scientist.

The fact that vaccines can and do cause injury and death in some situations is not even a debatable subject, as the U.S. Vaccine Court has paid out $BILLIONS in damages since the passage of the National Vaccine Compensation program passed in the 1980s, giving legal immunity to pharmaceutical companies who make vaccines, and can no longer be sued if a vaccine causes an injury or death.

But even though this is public knowledge, and even though Health Impact News publishes the quarterly reports published by the Department of Justice listing settlements for vaccine injuries and deaths, we are censored and labeled as publishing “Fake News” by the Big Tech giants, like Facebook and Google.

This is clearly information they do not want the public to know.

This is the one study that would solve this issue once and for all, but the U.S. government refuses to conduct such a trial, claiming it would be “unethical” to withhold vaccines from children.

Those outside of the government who have tried to conduct such studies have been attacked and censored. See for example our coverage of a 2016 peer-reviewed study on vaccinated versus unvaccinated children that was published, and then suddenly withdrawn, probably due to pressure from the pharmaceutical industry:

As this article demonstrates, many medical doctors agree with the conclusion of this study based on what they have seen in their own practice, if they are a medical practice that treats unvaccinated children, as many medical practices today refuse to treat children if their parents refuse any of the vaccines recommended by the CDC.

We have featured many of these doctors on Health Impact News over the years, and these doctors take great courage to speak publicly, because they are labeled as “quacks” and often face losing their medical license to practice.

Dr. Bob Zajac, a board-certified pediatrician with additional expertise in asthma/allergy care, developmental/behavioral pediatric care, and natural/holistic care, is one such doctor.

During the first two years of his practice, Dr. Zajac explains he saw a “separation” among his patient population.

There were patients who were seeing the local chiropractor who were healthier than my other patients, and they were doing some other things for their health other than just taking medication for whatever condition they might have.

They also had a lower vaccine uptake, and they were healthy. And that was really hard for me to recognize.

My partially unvaccinated patients, and none of us liked them, quite honestly, back then they were going against their medical doctor’s advice. And with the ego that I had, it was really hard to swallow.

It took me a couple of years to start learning about vaccines.

And the moment I started reading research about vaccines, it changed my life forever.

Dr. Zajac admits that he used to be a “vaccine bully,” because his clinic needed to achieve certain vaccine rates.

But his attitude changed as he had to start making decisions about vaccines for his own children, and his own clinical practice had shown that the rates of vaccine injuries were not what the CDC and drug companies were claiming, such as “one in a million,” but more like one out of 100 were being hospitalized from vaccine injuries.

Dr. Zajac discusses the range of children in his practice, their vaccine status, and their health:

Watch the entire interview at:

Families with Vaccinated and Unvaccinated Children

These are mostly former pro-vaccine parents who never doubted vaccinations until they saw the effects of vaccines in their own children, and then decided to not vaccinate other children born later based on their experience with vaccines.

These are actually very good “laboratories” because children in the same home experience much the same things in their environment, and any major differences in their health will be much more obvious.

VAXXED II film producer Polly Tommey has done the world a great favor by interviewing many of these families during their bus tour.

See videos on this link:

A common thread in all of these interviews is that even though they tell their stories to family and friends, they are ostracized by society, and no one wants to believe them. People think they are “crazy.”

Time for Hillary Simpson’s #craymother video (this one is still up on YouTube, but if it disappears let us know):