So from the lack of posting since we went away, you can see that not much of interest happened. That’s not to say it wasn’t a very enjoyable holiday
Is was our (almost) annual week away to somewhere we’ve not been before. A week was the perfect time to experience enough stuff and I think two weeks would have been too long
The area in Bulgaria we visited is called Pomorie, and we were in the old town part

I don’t know what you’d call that sticky out thing? Peninsuala? Whatever. It was very small and took roughly ten minutes to walk the width of it (Twenty back). We also walked about 5km round the circumfrence, thinking we would eventually have to turn back, but then ended up back in the area we started from

The architecture I mentioned in my last post; really interesting and often just looked like buildings piled on top of buildings. Further from the cost there was the more usual high rise blocks of flats
I also mentioned in my last post that we may have trouble communicating, due to the lack of English people and the lack of Bulgarians who speak English, along with our inability to speak a word of Bulgarian
We quickly came up with a solution. I downloaded a translator on my phone, translated a lot of common phrases and took screenshots of them. When I wanted something, I just pointed my phone at people 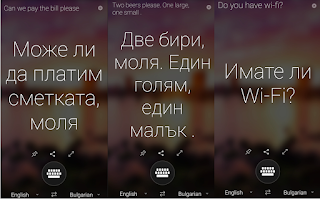 The food was interesting. Some of it was small portions and you order a few. Not quite tapas, more like build you own meal. Some of it was standard main meals
Most people are used to eating together, but not the Bulgarians.  The food was brought out as it was ready
Mrs B ordered a wrap and a side of potatoes, one lunch time. I just ordered a wrap. Her potatoes came out pretty quickly, but we were sat nibbling at those for ten minutes before my wrap came out, then another five or so until hers did
We made our peace with it and just tucked in whenever something was put before us
All the food was very cheap and delicious, though
There’s a saying in this world. You get what you pay for. I paid for a cheap and cheerful apartment and we got one
62 Steps to get to it on the top floor. The decor was 60s throwback and the beds and bedding had been left there since the 60s
The matresses were really lumpy and the springs kept springing when you least expected it. The sheets were threadbare and raggy
There was no hotplate or cooking facilities and the fridge was barely big enough to hold a six pack and a bottle of milk
It was clean and funtional though, and fine for laying our heads for a week
The resort area was very Blackpooly, but in a nice way. The town sqaure had a funfair each night and there were multiple donut stands, of which I partook frequently
The wife beat me three times on the funfair pellet gun, shooting game. I say three times. The last time I scored one more point than she did, but the guy got out his pen and changed her score. Apparently that counts…
We flew out with Easyjet and the airport was a doddle, until we got to the bar and they’ve taken all their tills out and you have to pay via a website from your table. I’m really getting tired of companies removeing the human element from customer service
The return trip was with Bulgarian Dead Chicken Airways, and they had no online check-in, so we had to queue up. The bar and smoking area after security was very nice though, and even though the Dead Chicken plane was an Airbus A320, same as Easyjet, there was a lot more legroom in the seats and the food service was a lot more varied and professional
All in all, it was a fun week and not bad for a budget holiday, despite my original misgivings 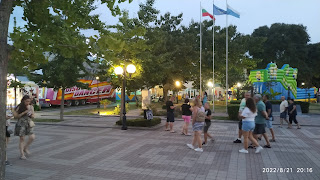 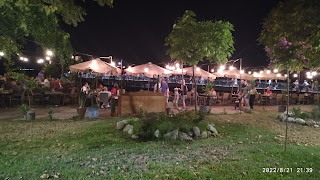 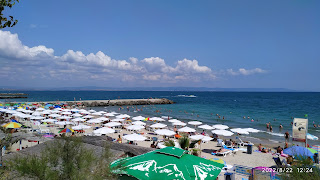 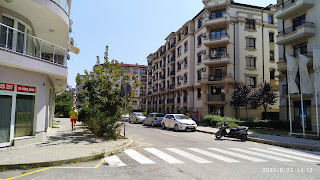 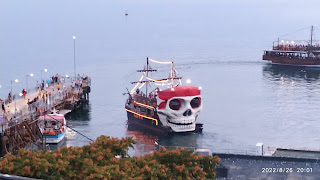