Eastern Europe has been experiencing record-breaking cold and heavy rains since the onset of September.

In fact, this has been a similar setup for long stretches of the summer, because while Western Europe has been attaining all the headlines –thanks to a heat-chasing mainstream media– it’s been holding anomalously-cold across the majority of the East.

This week, Kaliningrad, Russia and Minsk, Belarus were among the locales to suffer their earliest frosts in recorded history.

A story of Europe’s summer: the MSM reports on the ‘reds’ and sidesteps the ‘blues’.

Elsewhere, a swing between extremes –from heat to record cold– has been noted in Finland and other Baltic nations this week.

Yesterday, the mercury in Finland plunged as low as -7.5C (18.5F), at Ylivieska airport. In fact, this first week of September has been Finland’s coldest in decades, particularly in the South where the capital Helsinki has suffered its chilliest start to the month of September since 1941. 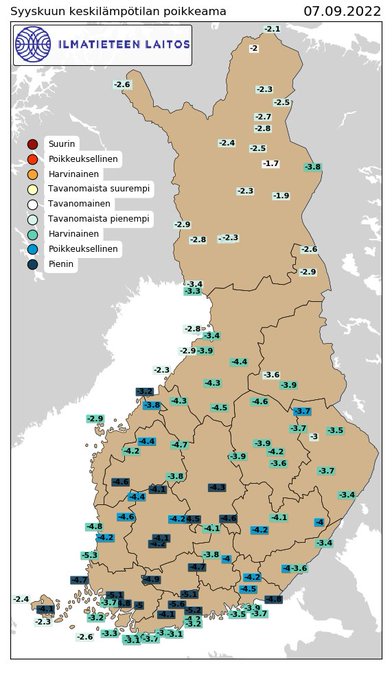 The mainstream corporate media aren’t at all interested in the cold, meaning an ever-trusting public aren’t at all privy to its existence. Literally. The dutiful masses still believe the ‘world is on fire’ –as that’s what they’re instructed to believe– even though the actual and readily sourceable data, ‘The Science’ we’re told to follow, tells of a contradictory and unalarming reality:

Greenland Just Gained A Record-Smashing 7 Gigatons Of Snow/Ice; + A Major Stratospheric Cooling Event Is Unfolding Across The Entire Southern Hemisphere…

Journalists ‘Instructed’ To Attribute “Any Extreme Heat To Human Caused Climate Change”; Cold Records Fall In Texas And Guam; + First Time Since 1941 That The Atlantic Has Had No Named Storms

It’s been a wickedly cold and snow start to September for many in New Zealand, with Christchurch the coldest ‘main city’ and Auckland plunging to near zero (C).

The low at Christchurch Airport dropped to -4.7C (23.5F) this week which, according to MetService, was the city’s second-lowest September temperature since records began in 1954 (almost pipping the coldest-ever low — the -4.8C (23.4F) set recently, in 2020).

Clear skies and a lack of wind were two reasons why it was so cold, MetService meteorologist Dan Corrigan said.

“The other reason why it’s exceptional is we had snow in Christchurch yesterday. That indicates we had some really cold air straight off the Antarctic sea ice sweeping up over the South Island.”

This was Christchurch’s first decent snowfall in almost a decade, with flurries also falling in Wellington and Dunedin. The last time the city saw settling snow was back in 2013.

Kiwi’s have been shivering this week, with freezing lows invading much of the country:

The Desert Road, which was covered in snow, registered -6.6C (20.1F) — incredibly cold for September.

Before the arrival of astronomical fall, pockets of the West are set for high-level snowfall–particularly the Northwest.

The models are jumping about all over the place in terms of volume, but the locations have remained pretty consistent: Montana, Idaho, Wyoming and even Utah and Colorado are all on course for high-elevation flurries over the coming days and weeks, with provinces north of the border –namely B.C.– also set for some substantial summer accumulations:

Looking elsewhere, there is a solid chance central and southern states could see fall-type weather, too, this weekend as the North’s pockets of polar cold descend down:

The September update of the USDA’s influential Wasde report is projected to show declines –surprise-surprise– in its estimates for the US and global ending stockpiles in the 2022/23 crop year, an Agricensus poll showed.

This season’s yields are seen at 172.5 bushels per acre, down quite substantially from 175.4 bushes per acre projected in August, with further falls expected as the USDA ‘trickle-feeds’ the bad news through — the agency exists to stabilize the markets, remember.

Declining production will lower U.S. ending stocks with analysts projecting the new report –due out 12:00 ET on Mon, Sept 12– will show 1.206 billion bushels (31 million mt), down by 182 million bushels (4.6 million mt) from the August Wasde.

Global ending stockpiles for the new crop year are projected to decline by 5.3 million mt from August’s report to 301 million mt.

The COLD TIMES are returning, the mid-latitudes are REFREEZING in line with historically low solar activity, cloud-nucleating Cosmic Rays, and a meridional jet stream flow (among many other forcings, including the impending release of the Beaufort Gyre).

Social Media channels are restricting Electroverse’s reach: Twitter are purging followers, while Facebook are labeling posts as “false” and have now locked me out of my account. And most recently, the CCDH stripped the website of its ability to advertise with Google.

So, be sure to subscribe to receive new post notifications by email. And also consider becoming a Patron or donating via Paypal (button located in the sidebar >>> or scroll down if on mobile). The site receives ZERO funding, and never has.

Any way you can, help me spread the message so others can survive and thrive in the coming times.

Source and for more images