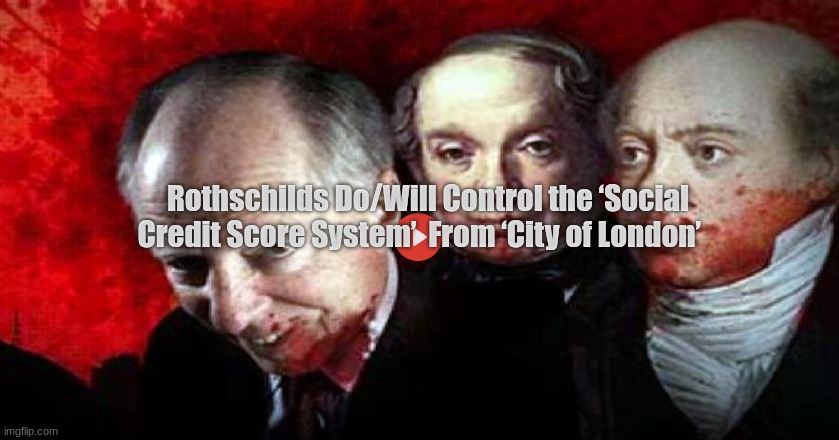 “American regulators controlled by the Senior Executive Service (SES) and the British Pilgrims Society Crown Agents have turned over total control of American banking to London. America’s stock, currency and commodity exchanges are completely controlled from London by Reuters.

DATA PROCESSING TRUISM: When you control the database, you control the data in it. If you don’t want a banking transaction to go through, you just mark it with one character, a zero “0” or “NO!” “Know Your Customer” (KYC) is the Mark of the Beast data to be controlled by mammon in London.

Inside a tangle of interlocking relationships we have discovered that the coming “social credit score system” is controlled by Thomson Reuters and the Rothschild
Banks in London.

After 9-11 and the USA Patriot Act, the British Pilgrims Society began building the “Know Your Customer (CYC)” database within banking. The excuse for unifying this record was for “anti-terrorism” and “anti- money laundering” post 9-11. This triggered a convolution of well-funded startups, mergers, reverse mergers, flips, jumps and interlocking relationships within stock exchanges and their regulatory co-conspirators.

We have this evidence from judicially-recognizable sources and are processing it now. It can be used in court without additional verification required. This helps avoid the election meddler mantra that no one is showing the evidence of massive 2020 voter fraud (which they are).

The bottom line of our findings is that America’s stock, commodity and currency regulators have ceded control of the KYC master database for controlling and approving transactions to Reuters in London—outside the United States.

All American securities, commodities and banking transactions are catalogued (and thus controlled) by the Rothschild’s Reuters KYC database in London. The London Stock Exchange Group (LSEG) is controlled by the same Reuters KYC database in London. flimsiest of arguments . Some of our documents have been there for two years and some had almost 20,000 reads.

George Orwell wrote in 1984 that one knows one is in a totalitarian state when telling the truth becomes an act of courage. Buried in the KYC charter is a single word: “enhance.” This means that whatever other data the markets wish to track via the Reuters KYC database, they can “enhance” that information.

Herein is the mammonic fiddle.

The KYC database can purchase additional data about a customer from other sources like Google, Yahoo!, Facebook, Instagram, Hulu, Uber, eBay, Amazon, Fedex, UPS and Apple. When this data is added to the customer’s KYC financial transaction data, a nearly impeccable profile of the person results. In fact, one can predict with high precision their every move, in advance.

We have thought that Facebook or Google would become the repository for the threatened social credit score system. NO! It will be Reuters purchasing that data and combining it with your KYC banking data!

Reuters has been controlled by the Rothschilds since 1850…”