Cecil M Hepworth was one of the founders of the British film industry and quoted below is an interesting episode from his book about those early days – Came the Dawn published in 1951.

There occurred about this time 1897-8 a rather strange interlude which I cannot place in exact order of date. This was the incursion into the incipient cinematograph world of Messieurs Lever and Nestlé – surely an odd combination of soap and Swiss milk – to exploit the possibilities of the film for advertisement purposes. The impact was a big one for those days, for they purchased no less than twelve complete Lumière projection outfits for a start. Each consisted of a limelight lantern together with all its accessories, condenser which was a large spherical bottle of water, a Lumière mechanism, being camera, printer and projector in one, and a suitable objective lens, all mounted on a strong wooden stand.
Even in 1897 the Lumière kit must have looked like something made in a shed. 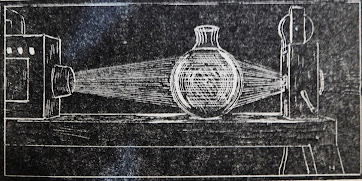 The operator and general manager for filming purposes was a man named Spencer Clarke who was my contact in the matter, there where I came in I cannot at all remember. In my recollection it feels as if the whole fantastic outfit burst upon me in a day and dropped out of my life again a few weeks later, though I seemed to have travelled about with Spencer Clarke quite a lot in the meantime.

And I have in my possession now two Lumière mechanisms which, I think, can only have come to me somehow through that connection. It is certainly very strange that two such important businesses should have joined hands and plunged together into the almost completely undeveloped sphere of the pictures – and plunged in such a big way too – apparently without any idea of what they meant to do about it. They faded out just as quietly as they came in and I never heard another word of them.