Leviathan Gold Ltd (LVX-TSXv) is the junior gold miner that has EVERY SINGLE ATTRIBUTE that took Fosterville South from 40 cents to $5 in the first six months of 2020.

That is why I think Leviathan Gold is ready to be my early candidate for Stock of The Year in 2021.

Where Leviathan could actually be in a better spot than Fosterville South at its IPO is…is that it’s starting out fully funded ($12 M cash), has institutional ownership, the Market knows the regional story and most importantly—a large drill campaign is starting immediately.  News flow will be fast, and steady right out of the gate.

And folks, today is DAY ONE of trading.  Nobody gets to buy before you do.

Leviathan’s two main assets are LITERALLY COVERED with historic high-grade gold discoveries right at surface.  Just look at how the gold dots—each one a high grade gold showing, or a historical working—blanket the entire properties in the map below.  The hardest part has been narrowing down exactly where to get started. 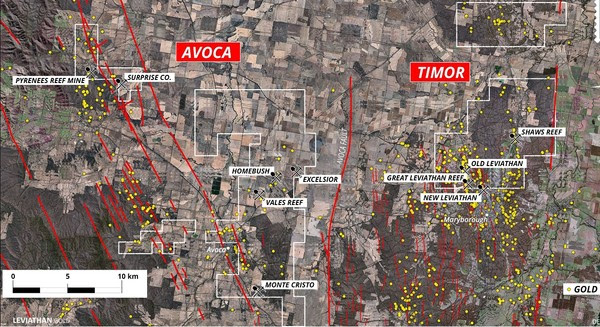 Talk about your first world problems!!

There has been no modern work done on these properties.  NONE.  That makes most geologists absolutely giddy.

All of these historic high-grade discoveries were made between 1862 and 1908…..then forgotten for two generations.

The high-grade gold that was discovered all across this project in the 1800s was done by men with no geological expertise, no equipment, no ability or inclination to figure out how much gold is really here.  They just followed their nose along super high-grade (and obvious) veins.

Those miners had no idea how much gold there may have been a bit deeper.  But to be fair to them, at this point in time doctors treated toothaches with cocaine and mental illness with bloodletting!!  It was that long ago…..

I’ve been involved with junior gold mining since 1990 and I’ve never seen a junior miner with this much historical, high grade gold near surface in a First World country—in flat topography, surrounded by farmers.

The few times I’ve seen a project that looks this good it is either in the middle of a remote jungle, on top of a mountain or in a place that I wouldn’t go without an entire army to protect me.

Instead Leviathan has this in a part of Australia where the geology and location make it the lowest cost, easiest mining imaginable.

They still have to find more gold to make this a success……but wow, what a setup.


Almost 1.5 million ounces of gold has already been produced from Leviathan’s land package.  This was all done by old techniques—very, very shallow and with no systematic exploration.  It was just old-time prospectors picking away at the gold at surface and trying to live another day.

For CEO Luke Norman—who Slusarchuk and Hutton hand-picked—his job is simple: follow the many high-grade historic discoveries (all those yellow dots in the map above) underground to find out how much gold is truly there–not  to mention the potential for additional gold occurrences that may lie shallow under cover.

Past mining here was focused purely on gold outcrops. There is clearly lots of potential for multiple large, high-grade gold systems.

Leviathan’s two assets­­–– Avoca and Timor—total 250 square kilometers.  All of those gold dots with historic discoveries are an invaluable roadmap for the geologists. They basically tell you where to start drilling.

Those gold dots represent REAL GOLD —— so no guesswork required.  None of the gold dots were properly developed.  At each location the 1800s miners went down to about 30 meters; the odd time 100 meters.

And nobody picked up from there for a couple of reasons:

1 – The First World War arrived and all young, able Australian men went to war
2 – The region flooded in with water…..

Soon a couple of decades had passed and there wasn’t anyone left who had worked these properties.

The entire region was forgotten.  Exploration in Australia went west to Perth and then northeast to Queensland.  Western Australia is so blessed with abundant minerals that nobody cared about this region until….

Kirkland Lake hit the motherlode with the Fosterville Mine more than 100 years later…in 2017/2018.  That would be just AFTER geologist Rex Motton had already staked out all of the land, 1,500 kilometers in total all around Kirkland Lake.

When Kirkland hit, those 1,500 kilometers suddenly became some of the most coveted properties on the planet.


Timor’s historic data is below.   There is 67,000 ounces of historic production at an average grade of 11.4 g/t. Both the depths of the historic drilling and the high grades discovered create reason for excitement.

Look at how shallow the work at all of those discoveries was.  It is very clear that the old prospectors were just scratching the surface. With the grade of gold they found it is tantalizing to think of what Leviathan may learn by finally properly drilling this in the coming months.

Most of the work ceased before 1900.  Now Leviathan is going to take these discoveries up to a full kilometer underground……exploring exponentially more of what the property has to offer.

The big hope obviously is that all of that high grade continues down, down, down.  The drilling that starts in February will start to fill us in.

Avoca is just like Timor.  It has abundant high grade gold at surface, with incredible exploration potential not yet taken to depth.  750,000 grams of historic production at an average grade of 32 g/t –– YES THAT IS THE AVERAGE GRADE…..one ounce per ton!!!!

You don’t have to be a geologist to understand the graphic from Avoca below.  Look at all those historic workings and openings. These weren’t even held at the time by different people. 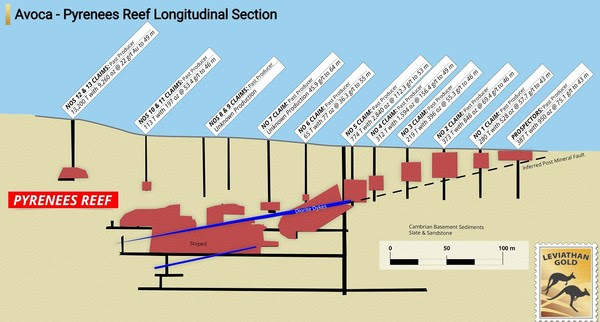 If you just simply line up the underground openings, you can see that they continue to depths and some of them line up with diorite dykes that appears to be a control on the mineralization.

This initial drilling at Leviathan isn’t about drilling trying to find something huge.  It is already sitting right there in front them.  The drilling now is about putting some numbers together (delineating) to see how big and consistent this high grade mineralization is.  Could it support a resource calculation or–way down the road–a full-fledged mine plan?  That’s what drilling will tell us.  There are no guarantees!

But with $12 million in the bank and the lowest cost operating jurisdiction imaginable they have the money to get after it really hard and really fast.  More drill holes get done here per dollar spent than anywhere.

So I do expect the exploration cycle here to be much faster here than normal.  They’re not going to have to interrupt drilling for a financing.

The only thing I know for sure is that I have never seen a better set up for exploration success than Leviathan Gold–LVS-TSXv.

Keith Schaefer is not registered with the United States Securities and Exchange Commission (the “SEC”): as a “broker-dealer” under the Exchange Act, as an “investment adviser” under the Investment Advisers Act of 1940, or in any other capacity. He is also not registered with any state securities commission or authority as a broker-dealer or investment advisor or in any other capacity.