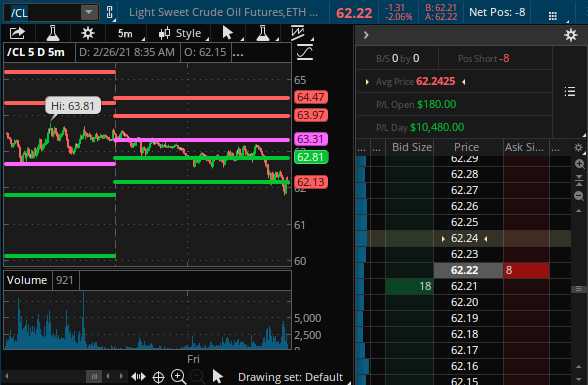 We’ve been playing the Oil Futures (/CL) with conviction and, although we have a nice $10,000 gain this morning – it only makes us even as we’ve had to double down our two shorts twice.  Now we’re at goal as all we ever wanted to do was get back to even and get back to 2 shorts – but now at a much higher basis ($62.24) for a long-term play.

Conviction shorts are very different and require a lot more risk tolerance – they are certainly not for everyone.  Our conviction is that next week’s OPEC meeting will not do enough to keep prices over $60, so we’re positioning for that.

The 5% Rule™ is not TA – it’s just math.  People like charts so we put them up but when I was young and rebellious, I refused to put charts on this site, thinking I could break people of the habit of staring at the entrails of companies to make predictions about their future.  Our predictions are based on Fundamentals, coupled with Short-Term and Long-Term macro analysis and the 5% Rule™ simply tells us where the inflection points will be – the places we are likely to see support and resistance along the way. 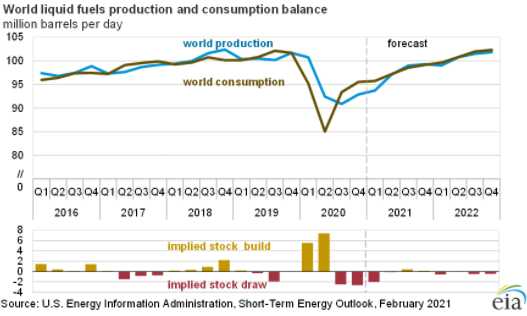 OPEC+ (OPEC plus Russia, Mexico and 8 others) are meeting next week but it’s very unlikely, in the midst of an Economic Crisis and with oil selling well over $50/barrel – that the Saudis will be able to get the other nations to pledge to continue production cuts.

As you can see from the chart on the right, any loss of control over the producers that brings production back to normal levels would quickly create a massive glut of oil again – and we saw how long that took to grind down last year.  Only continued production cuts can keep oil prices over $50 but, like Powell’s stimulus – at this point – where’s the upside catalyst going to come from?

If you believe the oil market is well-controlled by OPEC, how come you can still buy oil for the Summer of 2022 for just over $55 per barrel?  Oil Futures are like Bitcoin – they are pure speculation and can swing wildly one way or the other but the long-term trends tell a story and the story, at the moment, is that short-term prices are too high and likely to correct.  Just like our economy, oil prices are being manipulated by a Central Board (OPEC) who are doing everything they can to keep the prices up but there are consequences for the OPEC nations – less oil production means less money to pay the bills and, unlike the US, other countries do have to pay their bills. 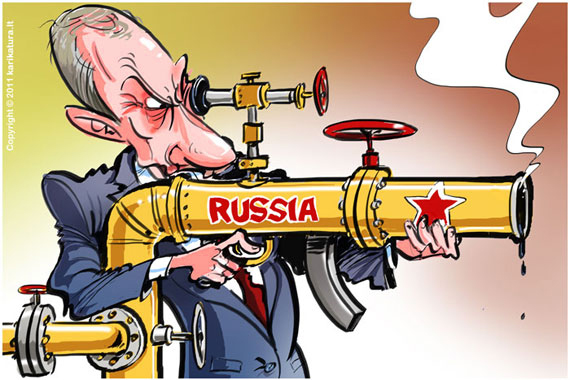 In fact, that’s why Putin has $80Bn – he controls the levers of a major World economy and constantly uses it to his advantage.  Now, let’s say on the other hand, Russia cooperates and cuts production from 9.5Mb/d to 9Mb/d.  Even if oil goes to $65, revenues go from $570M/day at $60 (assuming a drop) to $585Mb/d at $65 so it would take Putin a month to make $353M, which isn’t bad but that wouldn’t be Putin’s money, would it?  He would only get his share as an owner of some of the production whereas, playing the Futures – he gets it all.

Do you think Putin made $80Bn by just taking his share?

And then there is always option C, where Russia INCREASES production by 10%, oil falls to $55/barrel but that’s $550M per day so little damage to Russia’s revenue stream and Vlad pockets $850M instead.  Of course, no national leader would put their own self-interest ahead of their country’s – right America?

So that’s very simple then, if 3,910 fails to be taken back and held into the close – we are very likely to see 3,800 and possibly 3,700 in the next two weeks.  So we know where the restistance is – now we think about what will happen to get us over it?  Will there be MORE FREE MONEY?  Can Powell be even more doveish?  Can Yellen ask for even more stimulus?  Will Republicans decide to give Joe Biden a blank check?  That’s what the Democrats did for Bush in 2008 and what they did for Trump last year – I’m sure the Republicans will be just as cooperative in helping President Biden fix our economy.