Up and up and up she goes.

There is no metric that seems to worry traders these days.  The Shiller (or CAPE) P/E Ratio, which shows inflation-adjusted earnings over the past 10 years (read “Irrational Exuberance

” for more details) is just off the all-time high of 45 at 38.75 and, while you may think that’s nowhere near 45, that was in late 1999 – when the markets were truly insane.  The previous record before that was 30 – on Black Tuesday – just before the entire global economy collapsed in 1929.

So why WON’T we collapse?  Mainly because this market is being artificially supported by the Government through Stimulus  and Bailouts and the Federal Reserve through Bond Purchases, Low Rates and Bailouts.  Because the Fed has set rates artificially low and inflation is high, savers are penalized for putting their money into the banks or bonds (which the Fed are buying) and we just had a massive housing collapse 13 years ago so people are still nervous there and, since that collapse, the S&P has pretty much gone straight up from 666 to 4,456 this morning – that’s 569% in 13 years! 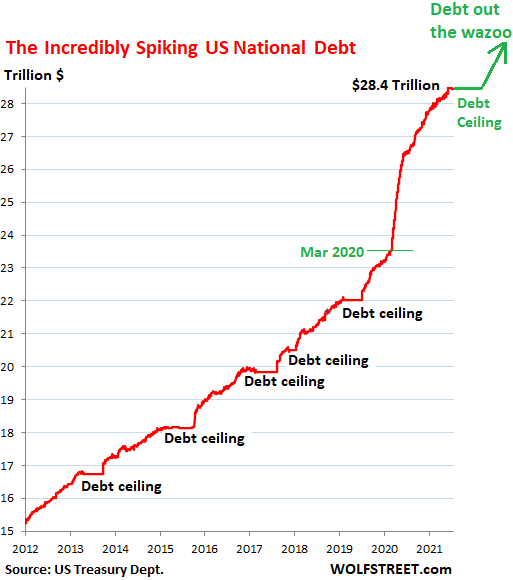 That means the only limitation to the market rally is the Fed and the Government’s limits on spending.  The Fed effectively has none while the Government has a “Debt Ceiling” – which is pretty much a joke but still manages to be a “crisis” every year or so.

So the Fed isn’t just keeping rates low to help the market.  If they did let rates normalize, the Government would either have to raise taxes by 20% or cut spending by 20% (and again, we’re running a massive defict, not break-even) and neither one of those things is likely to happen so the Fed really has no choice but to pretend rates need to be near 0% to keep our Government from collapsing.

In order to keep the rates below market, the Fed has to also pretend people want to buy our overpriced (via low interest) bonds and they do that by buying most of the bonds the Government sells every month and their Member Banks take most of the rest, steering a huge amount of the people’s retirement savings into a bond market that is on the verge of collapsing.  What could possibly go wrong?

As you can see in 2001 and 2008, low rates don’t keep you from having a recession but lower rates can get you out of one but what do you do when your rates are already at 1.5% and usually the Fed drops a good 2% to boost the economy?  Are we going to PAY the Government to borrow our money?  That’s what’s happening in Japan, where short-term notes are negative and the 10-year pays just 0.026% – essentially zero with a rounding error.  In the Netherlands it does, in fact, cost you 0.336% annual interest to lend the Government your money for 10 years – so you get back 3.36% less than you started with.

You pay Germany 0.44% annually to hold your money, 0.102% to France and 0.118% to Belgium.  Italy pays you 0.578% because their economy, like the UK (0.6%) is pretty scary but not as scary as the US, where our Government has to pay 1.35% to borrow your money – even with the Fed pumping $80Bn per month into bonds at any price.  However, Kansas City Fed President, Esther George, said the Central Bank has made enough progress toward its objectives of boosting growth and employment to end its $120 billion in monthly purchases of Treasury and mortgage securities.

“With the recovery under way, a transition from extraordinary monetary policy accommodation to more neutral settings must follow,” Ms. George said in a speech to the National Association for Business Economics on Wednesday. “Today’s tight economy…certainly does not call for a tight monetary policy, but it does signal that the time has come to dial back the settings.”

The side effect of keeping rates too low is Inflation and Germany is a country that is terrified of inflation – as that’s what pretty much led to World War II.  Our Fed is getting worried about it too and that’s my worry about the economy, both domestically and globally – we can’t keep this stuff up forever – something has to give and you can see the rivits beginning to pop off the economic engine as it’s massively overheating.

In a separate interview, Dallas Fed President Robert Kaplan argued that the central bank should begin reducing the pace of asset purchases by October. “As long as the economy progresses as I expect, we will meet the…criteria at the September meeting,” he said. He said he would support announcing then that the Fed would therefore begin reducing purchases the following month.

Of course, they are just testing the markets – to see what kind of reaction they get to the concept of withdrawing support for low rates but, even if they do, it’s likely to be a “taper” from $120Bn a month to $110Bn/month – not some cold-turkey removal of support and they’ll slap it right back on if the economy falters again.

So the wildcard is not likely to be the Fed, who well know the dire conserquences of rasing the interest rate to a client that can’t even make the current payments without constantly refinancing.  As the old saying goes: “When you owe the Bank a Million Dollars – YOU are in trouble but, when you owe the bank $32Tn – the BANK is in trouble!”