It’s obvious now that the bulls are not going to do a flush out drop into the mid-4100′s and then a strong 2-3 day bounce. The falling dashed orange trendline of resistance gave way yesterday to the bulls as they pushed through it and went up to fill a gap on the SPX from 9/24 as we as hit the FP on the SPY this morning from 9/28 at 443.72… which got close with the bounce up into 10/7 but stopped about 2 points shy of it.

If anyone could actually figure out the true code in these fake print signals you could retire from trading them for sure. That FP was put out over two weeks ago and is just now hitting. It’s like a “marker” that the market must go back to at some point and touch. That “touch” has now happened so it’s finished and so is the gap fill on the SPX. Nothing left here but the technicals basically, so once they get overbought enough this rally should end. The are already overbought on the 4hr and below time frames and the 6hr and 7 1/2 hour are very close. I don’t mention the 7 1/2 but it’s the 450 minutes of the cash market day that the SPX is trading. It’s just another time frame to follow, nothing more.

The daily chart though is the problem as it’s only up to around 56 this morning and 70 is overbought, so it could run higher before rolling over. And it’s pretty clear that yesterdays rally was some kind of wave 3 up… what degree I don’t know but that’s not important. What is important is to see a wave 4 pullback of some degree and then a wave 5 up to finish the rally. This basically aligns up with the daily chart needing a little more time to top out with its RSI, which does not have to go all the way up to 70 to get overbought.

When you look back at the last year you can see it only went over 70 in April and all the other times it stopped in the high 60′s, with the current all time high having that RSI stop at 67 roughly. I’m thinking we reach 60-64 this time around, which is just a guess of course. It’s lower then the other highs because we are still in a correction whereas all the other tops we were in an uptrend, therefore I don’t think it needs to go as high. 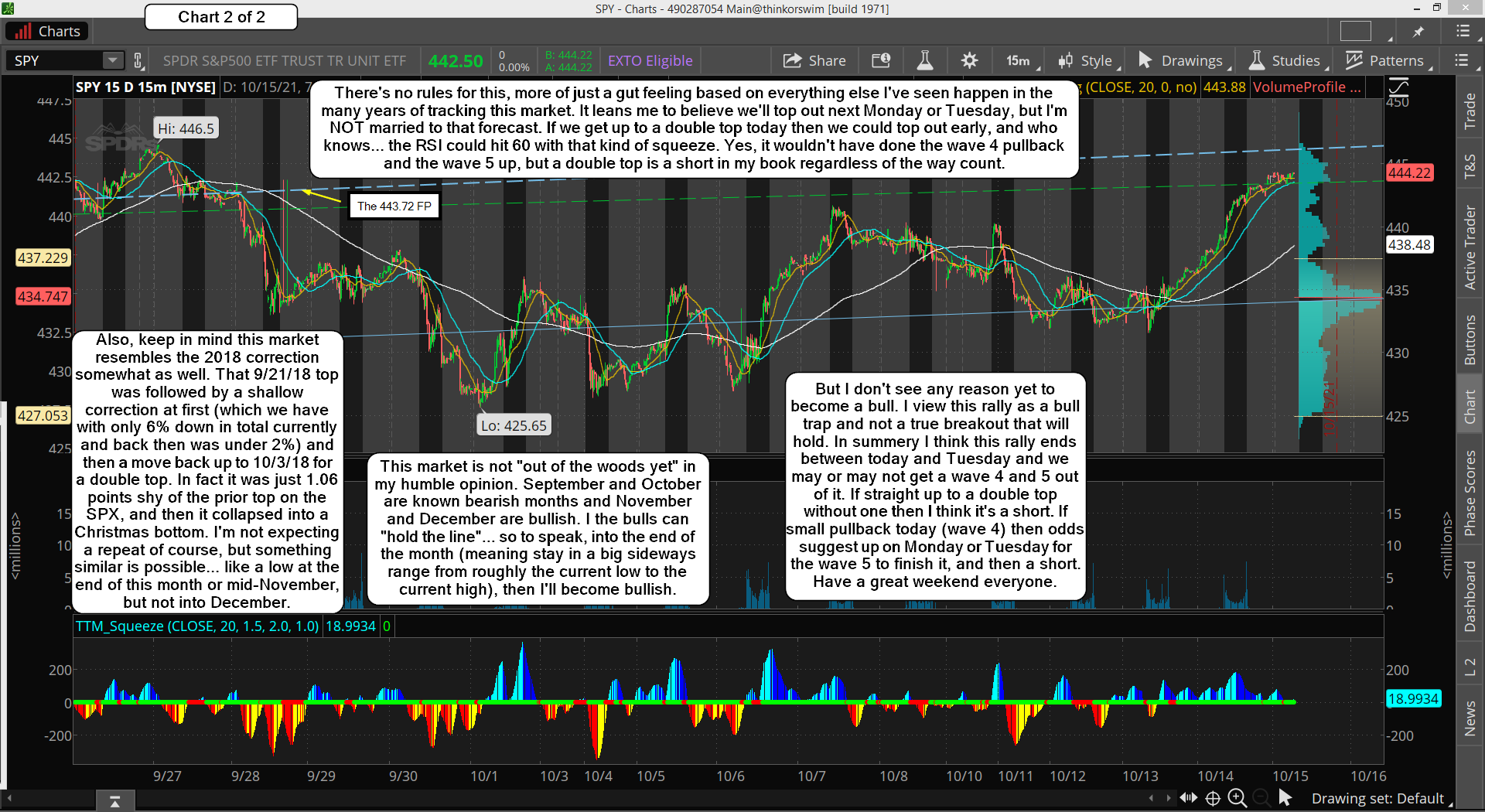 There’s no rules for this, more of just a gut feeling based on everything else I’ve seen happen in the many years of tracking this market. It leans me to believe we’ll top out next Monday or Tuesday, but I’m NOT married to that forecast. If we get up to a double top today then we could top out early, and who knows… the RSI could hit 60 with that kind of squeeze. Yes, it wouldn’t have done the wave 4 pullback and the wave 5 up, but a double top is a short in my book regardless of the way count.

Also, keep in mind this market resembles the 2018 correction somewhat as well. That 9/21/18 top was followed by a shallow correction at first (which we have with only 6% down in total currently and back then was under 2%) and then a move back up to 10/3/18 for a double top. In fact it was just 1.06 points shy of the prior top on the SPX, and then it collapsed into a Christmas bottom. I’m not expecting a repeat of course, but something similar is possible… like a low at the end of this month or mid-November, but not into December.

This market is not “out of the woods yet” in my humble opinion. September and October are known bearish months and November and December are bullish. I the bulls can “hold the line”… so to speak, into the end of the month (meaning stay in a big sideways range from roughly the current low to the current high), then I’ll become bullish.

But I don’t see any reason yet to become a bull. I view this rally as a bull trap and not a true breakout that will hold. In summery I think this rally ends between today and Tuesday and we may or may not get a wave 4 and 5 out of it. If straight up to a double top without one then I think it’s a short. If small pullback today (wave 4) then odds suggest up on Monday or Tuesday for the wave 5 to finish it, and then a short. Have a great weekend everyone.