As I write this update it’s Sunday and the futures aren’t yet open so things could change a little but the overall picture here still remains the same. The drop we had Thursday and Friday was deeper then I thought for the Tiny Wave 1 but I still think that wave count is correct.

I see the Medium B Wave completed on 12/13 and that’s where the Medium C Wave down started. The slightly higher high last Wednesday/Thursday was only on the ES Future so that’s just a “thrown over” for that wave up I believe. Therefore the first wave down in the Medium C ended at the low of 4598.25 on Wednesday before the FOMC meeting.

That was the Small Wave 1 inside Medium C down. Then we had a Tiny A up and Tiny B down in front of the meeting and a face ripper Tiny C up afterwards… which ended the Small Wave 2 the following morning to hit 4743.25 for a slightly higher high.

After that we started the Small Wave 3 down which lasted into the close on Friday. Of course wave 3′s usually breakdown in 5 smaller waves and I fully expect this one to do just that as well. This first two day drop is the Tiny Wave 1 and I suspect it bottomed on Friday or will do so in the futures Sunday night before the open on Monday.

I actually think we’ll gap up on Monday to squeeze out the bears that went short on Friday. This will be the Tiny Wave 2 up inside Small Wave 3 down inside Medium Wave C down. This Tiny Wave 2 up should end early Monday and be a great short for a Tiny Wave 3 down afterwards… which should last into the open Tuesday.

But… since we are closed on Friday the 24th for Christmas I suspect they won’t continue to drop it into the holiday but inside rally back up from that early Tuesday low.  The Tiny Wave 4 up inside Small Wave 3 down Tiny Wave 5 down will likely play out into that low as well to complete Small Wave 3 down before the rally into the close on Thursday.  I don’t know how low it’s going to go but I’d say 4550′s or so is likely.

Small Wave 4 is likely going to be the rally up from this Tuesdays low in Thursday the 24th, which with the expected light volume could easily get back up to 4700.  Then after Christmas we should see last wave down play out, which is Small Wave 5 down. , but again… I won’t for sure until we are in it.

The point that is important here is that on Monday the 27th (and probably starting in the Sunday futures on the 26th) we’ll be going down for this last wave. Now, most wave 5′s subdivide into five smaller waves but not all. Some are just a one wave pattern, but those are usually the “truncated” one, and they are more common I’ve noticed on the upside.

This is a downside 5th wave so I tend to think it will not truncate short and will extend down below the 4500 level where all the stops are at from the bulls buying the triple bottom. Whether it does it in five waves or one I don’t know but it’s not really important as this should bottom into the 4400′s to run those stops and end this entire ABC correction from the 11/22 high and starting point.

This is the picture I see for the rest of the year.  After it’s over with we can expect to see the next big rally start to take us up to 5000+ into the first couple of months in 2022.  How high it goes is unknown but the higher it does the more likely that it will end faster and not drag out into 2023.  Have a blessed day. 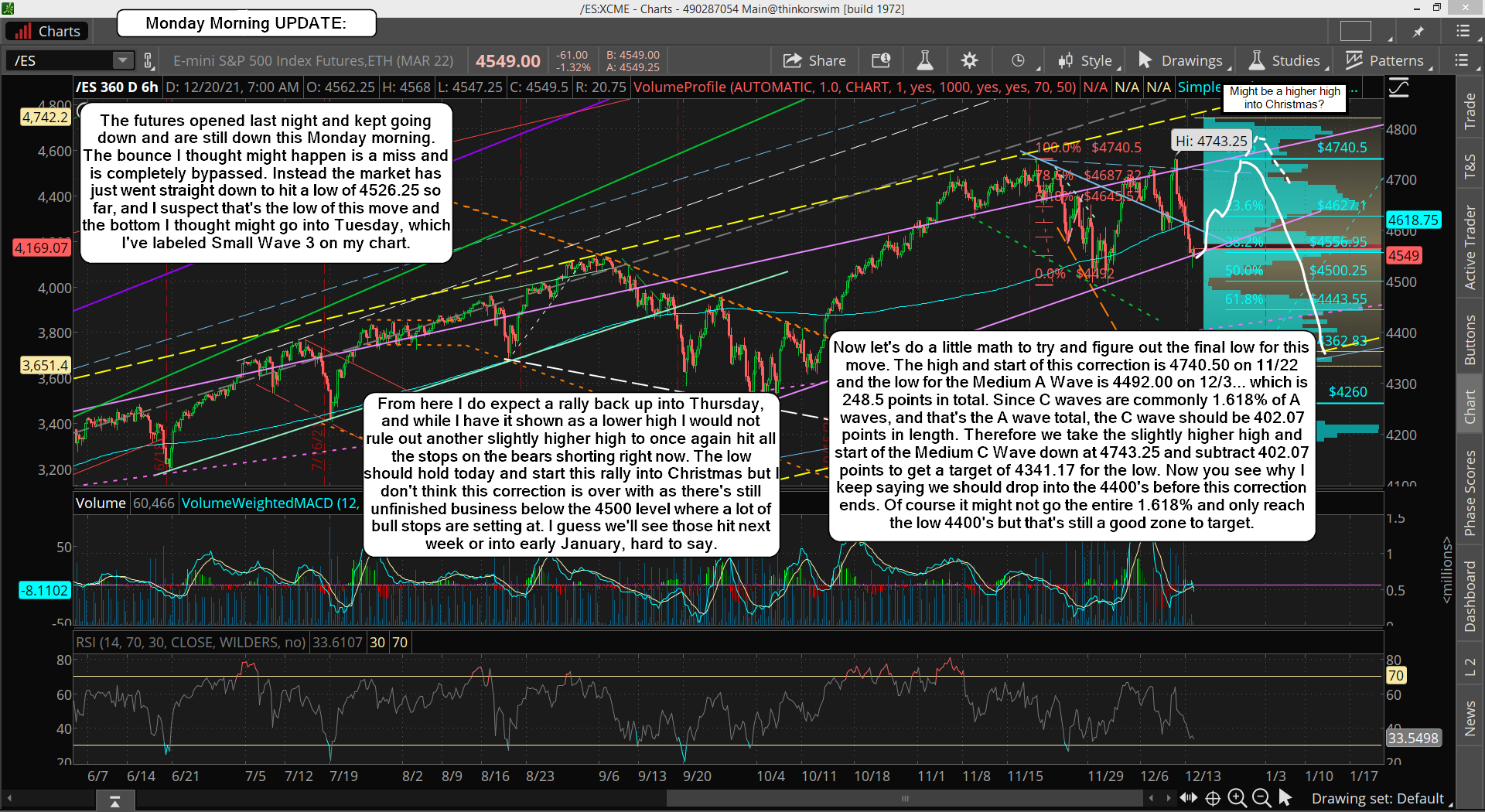 The futures opened last night and kept going down and are still down this Monday morning. The bounce I thought might happen is a miss and is completely bypassed. Instead the market has just went straight down to hit a low of 4526.25 so far, and I suspect that’s the low of this move and the bottom I thought might go into Tuesday, which I’ve labeled Small Wave 3 on my chart.

From here I do expect a rally back up into Thursday, and while I have it shown as a lower high I would not rule out another slightly higher high to once again hit all the stops on the bears shorting right now. The low should hold today and start this rally into Christmas but I don’t think this correction is over with as there’s still unfinished business below the 4500 level where a lot of bull stops are setting at. I guess we’ll see those hit next week or into early January, hard to say.