This is a Market with very few places to hide.

All the favorites are getting killed.  You thought you could hide in consumer staples, in big tech?  Think again.

With the world upside down, is it any surprise that the biggest safe haven has been the most volatile and treacherous market in the past? 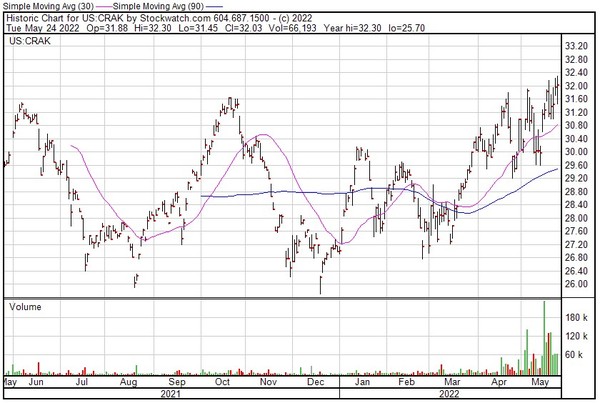 My subscribers have benefited – I’ve piled into a refiner play that I called the best stock set up I’ve seen in years – its up 25% already and I think it has further to go.

But the whole group is making money hand of fist right now.  So my question is – do I make a wider sector bet?

Bank of America is calling this “the golden age” of refiners.   You would have been hard pressed to see that coming – refiners have been a beleaguered group for years.  But now I gotta admit, there are a bunch of reasons to think that refiners will be in the catbird seat for some time to come.

We are at multi-year highs in crack spreads.

Both gasoline and distillate crack spreads (that is the spread between what it costs refiners for oil and what they can sell the product for) are at multi-year highs and nearly 4x the 5-year average.

In a recent blog post, RBN Energy pointed even more historic extremes, saying that “diesel inventories are at their lowest level for May since 2000 and East Coast stocks recently hit their lowest mark for any week or month since the EIA started tracking them in 1990”!!!

The following chart says it all: 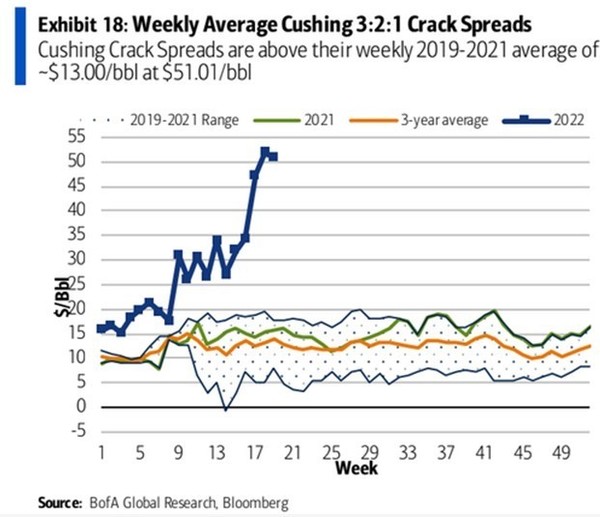 Cracks have gone parabolic for 3 reasons:
The combination of no new refineries and increased exports make me think this cycle could be longer and stronger than anyone might expect.

As Bank of America put it, there is “a long-term structural cost advantage anchored on US vs International natural gas” while “net US refinery closures that will see the domestic refiners with 10% less refining capacity”.  That sounds like a lethal combination.

Distillate spreads have been the biggest story.  The Gulf Coast distillate crack is $70 per barrel.  The 5-year average in $15.  That is nearly 5x higher than the average margin!

Distillate is diesel, jet fuel, home heating, etc.  It may not be what you see at the pump, but the price of distillates hits you in a whole bunch of ways.

It is not a stretch to say the East Coast is about to run out of diesel, jet fuel and other products.  PADD 1 inventories (that is the East Coast) are less than half the 5-year average.

We are just coming up on the summer driving season where refiners will be switching away from distillate in favor of gasoline.  They’ve been putting off that switch because distillate has been so darn profitable.

Refining is seasonal.   In early spring refiners change their output – from ‘max diesel’ to ‘max gasoline’ – to gear up for driving season.   This year the spread between diesel and gasoline was so wide that refiners delayed the switch.

While that kept distillate inventories from going dry, it had an inevitable impact on gasoline.  Since the beginning of May gasoline has made a big catch-up.  Gasoline spreads are now as high or higher than distillate.

This puts gasoline in the headlights as we approached summer driving.  Gasoline inventories look like a tech stock – plummeting through the 5-year average in the last few weeks: 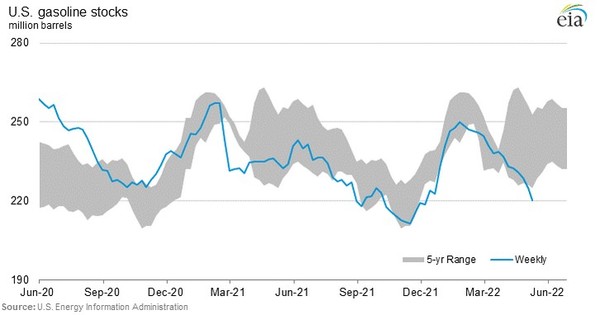 How did this happen?  How did any of this happen!   COVID, of course.  And the Russian invasion of Ukraine. 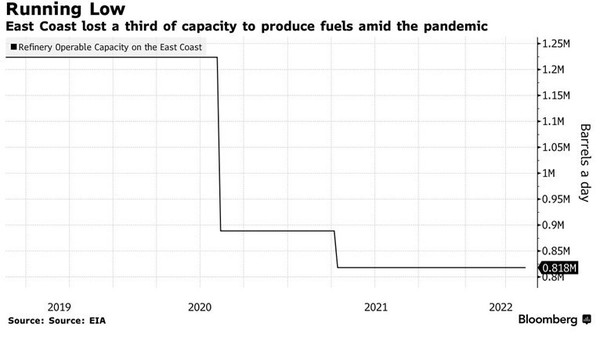 So they shut it in.  Over one million barrels of refining capacity was lost through the pandemic. 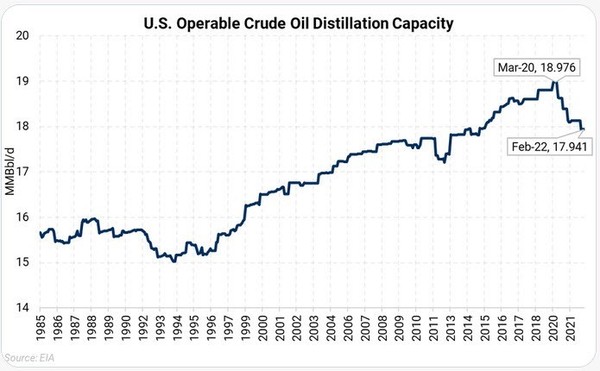 One million barrels!  That is 5% – a big number once the economy came back and travel began to normalize.

Outside of the United States another 2 million barrels a day went offline.

The second big factor has been the Russian invasion and subsequent spurning of Russian product.

In Europe, Russia was a big supplier of diesel – to the tune of 800 thousand barrels per day.  That demand is now largely coming from United States exports.

These exports have eaten into distillates that might otherwise come to the Eastern United States, where distillate inventories are tightest.

They have also created a domino effect.  Distillate supply from Asia to the West Coast has not been showing up.  Inventories on the West Coast are quickly tightening.

Even as domestic distillate prices soar, exports out of the United States remain high – at levels last seen in 2016-2017. 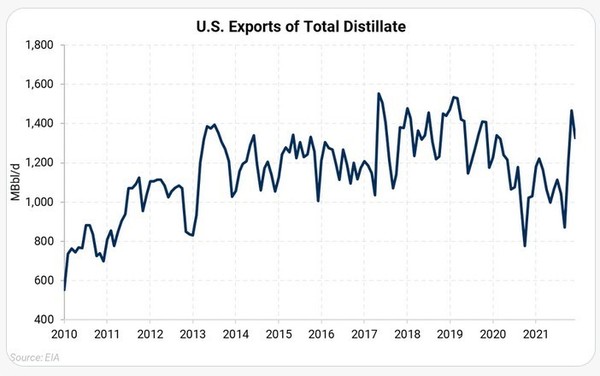 Every molecule of oil and gas that can be exported out of North America IS getting exported.   North America still has the lowest (unsubsidized) energy prices in the world. US distillate exports are WAY UP to meet that OECD demand!!

It is a mess.  And it is not clear what ends it.  As SAE Group reported:

Once again, Saudi Energy Minister Abdulaziz is able to clearly and very simply explain the oil situation – there is no refining capacity to meet the summer expectations of demand

A BOOM TO THE BOTTOM LINE

Refiner stocks are all very levered to crack spreads.  These companies make big money on big spreads.  But profits are usually fleeting so the stocks get very low PE multiples.

Their leverage has never been more evident than it is now. 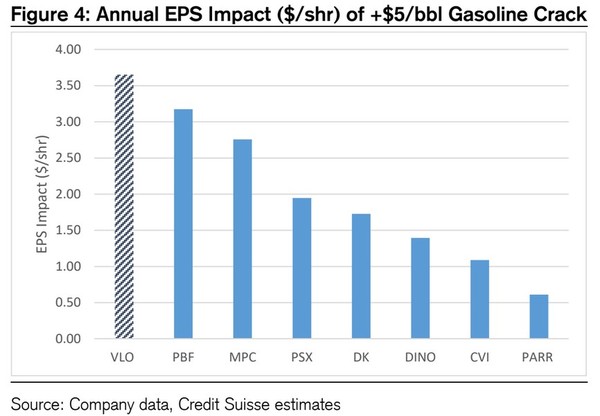 To give you the most levered example:  PBF Energy (PBF – NYSE) is always the refiner most levered to price.  For every $5 increase in the gasoline crack, EPS for PBF Energy increases over $3 per share.

Gasoline spreads are $35-$40 over the 5-year average.  That means PBF is looking at 7x-8x that $3 per share if cracks can stay at this level for a year.  PBF Energy is a $30 stock today.  A venerable windfall!

But you don’t have to go that far down the quality curve to get leverage to price.  According to Credit Suisse, among the majors, with close to ~4.3MMb/d of net global refining capacity, Exxon (XOM – NYSE) is most levered to higher gasoline crack on absolute and on earnings impact basis.” 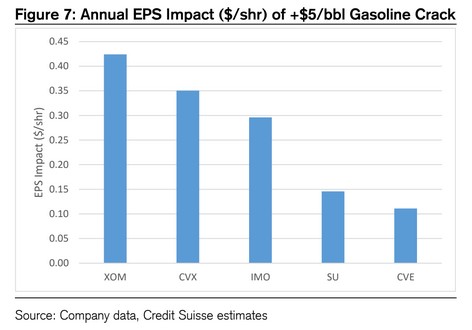 This is the only question that matters.  How long can these spreads last?

When I look at the supply side, it is hard to see the bear case.  The Russians don’t look like they plan to let up–and even if they do those sanctions are going to stick.

New capacity is NOT going to come to the rescue.  The renewable mandate has changed the game—shoveling billions of dollars to build new refineries while every Western Government is telling you in 10 years it won’t be needed…??? It simply does not make sense.

Refinery utilization is about 90% right now.  It could go higher, and likely will, but that alone is not going to solve prices.

The gotcha for the refinery trade lies firmly on demand.  Will demand hold up with high prices?

That is a tough call.  The old saying – the biggest cure for high prices is high prices – is in full effect.

You also have a Fed that is hell-bent on squeezing the consumer to slow demand across the economy.

Taking a roll on the refiner trade here is making a bet that neither of these headwinds can steamroll demand – and margins.

That seems risky to me.  My big picture view has been on recession alert.  Which is why I have played the refinery trade in a single, very specific way.  One refiner that has hit on the jackpot and yet still trades at a very reasonable price.  If  you want to read my full report on it—RISK FREE–click HERE.

As for the rest of the space, I’m going to have to leave that for others.  I love the idea of windfall profits.  Who doesn’t?   But refiner profits are also their own worst enemy and I don’t want to be caught when the cycle turns.