We have been running the StockRanks since 2013. That is quite a long time, but arguably not long enough to explore how StockRanks perform when the market crashes. Investors have seen difficult times in recent years, but the StockRanks haven’t been through anything comparable to the crash of 2008-09. The market panicked in March 2020. However, the fall was nowhere near as deep as the falls of 1974, 2001 or 2008. Many readers will suggest that in 2020, central banks and governments just kicked the can down the road. That is to say, they ‘postponed’ a severe bear market by printing money and assuming huge levels of debt. Stocks may well face headwinds as quantitative easing winds down and governments cut the debt, very possibly through austerity. There is also geopolitical risk. So the obvious question remains: how will the StockRanks perform as we go forward? We can explore this question by analysing how they performed during bear markets that happened since 2013…

In 2015, many commentators expected Greece to drop out of the Eurozone. The crisis was of course an extension of the European debt crisis of 2010-12. I’m not going into economic historian mode. The key thing is that Greek markets went through a bearish phase. The Athens stock exchange was literally closed to trading by the summer of 2015. That’s how bad things got. The market technically entered a bearish phase on 16 May 2014, when the Athens General Index closed 20% down from the 60-day high it reached on 18 March 2014. We will explore how the StockRanks performed from late March 2014 through to the summer of 2015.

Before diving in, there are a few technical points to bear in mind. Greece is a small country, with around 200 listed securities. We generate StockRanks for Greek stocks by comparing Greek companies against their peers in Southern Europe (ie. Italy, Spain and Portugal). This means that from time to time, there may be no Greek stocks in a given decile. For instance, if the Greek market crashed while Southern Europe enjoyed strong price momentum, you would find fewer Greek stocks in the decile of top MomentumRank stocks. If there were no stocks in a given decile, the performance chart would flatline.

Furthermore, we are analysing StockRank performance over a fairly short period, specifically the bear market that lasted from March 2014 until Greek markets closed during the summer of 2015. Researchers find statistically significant results by using a larger sample size and a wider timeframe, so our research is not methodologically perfect. We nevertheless hope it can be used heuristically. The Greek crisis of 2014-15 was one the few bear markets that tested the StockRanks since their launch in 2013. This makes the Greek crisis an interesting case-study that can be used to make investment decisions in the future.

Let’s take an international perspective to begin with. Did the ranks provide leading indicators of the Greek bear market? We can explore this question by comparing StockRanks on a country-by-country basis. In March 2014, the market average QVM score was lower in Greece than in Italy, Spain and Portugal, by a clear margin. Greek stocks also had a lower MomentrumRank and a lower QualityRank than their South European counterparts. 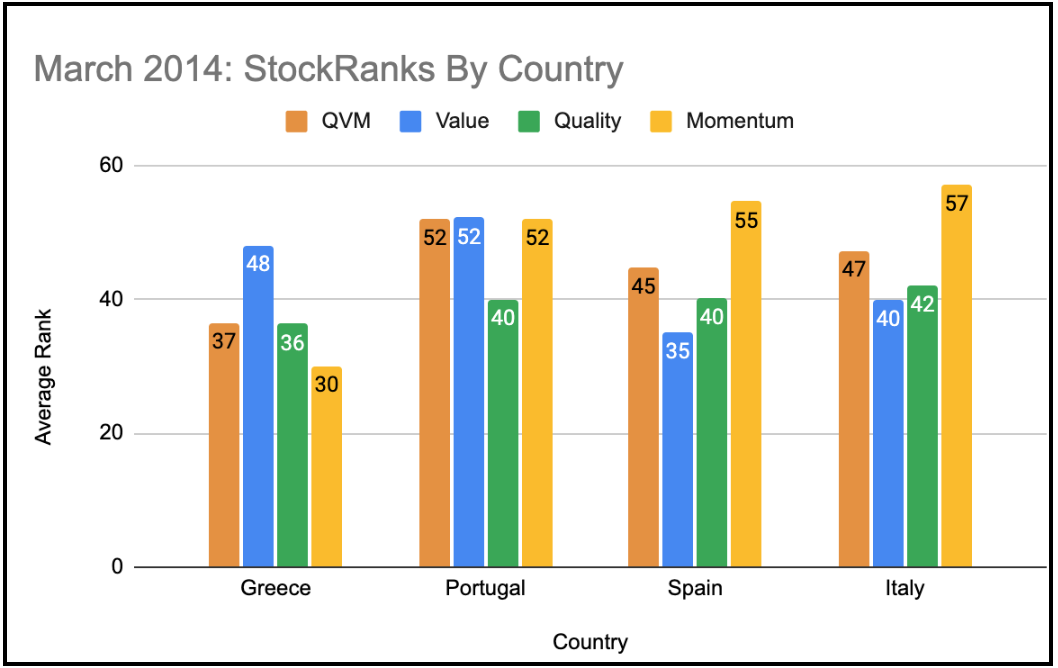 Companies with a lower StockRank generally underperform higher StockRank stocks. There is some evidence that this rule of thumb can be applied on an international basis. We can see from the chart below that the Greek market underperformed other European markets. 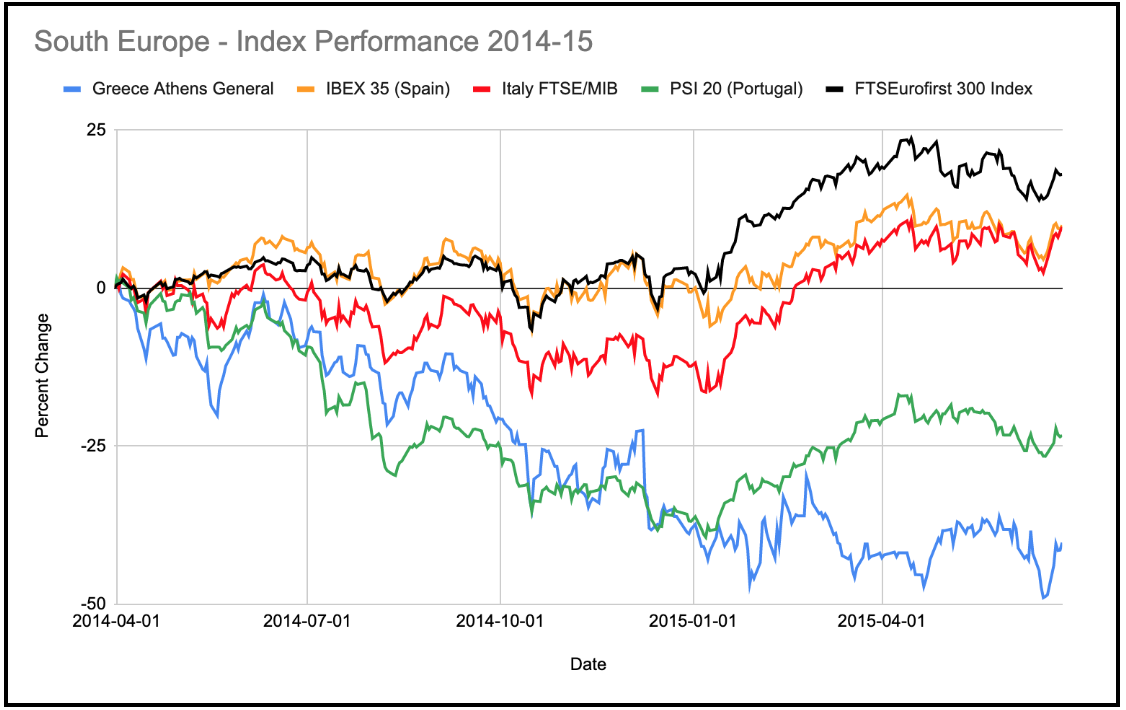 Quality is perhaps the most interesting factor here. Quality refers to a firm’s ability to generate cash and profits. It also refers to the strength of a firm’s balance sheet. All other factors being equal, higher indebtedness results in a lower QualityRank. The Greek crisis was a debt crisis, primarily a sovereign debt crisis, although corporate debt was also high, particularly in the financial sector where debt-to-equity ratios were higher than in other South European countries (see below). You would perhaps expect the QualityRank to be worse for stocks in more indebted economies. The average QualityRank was indeed worse in Greece (36) than in Italy (42), Portugal (40) and Spain (40). 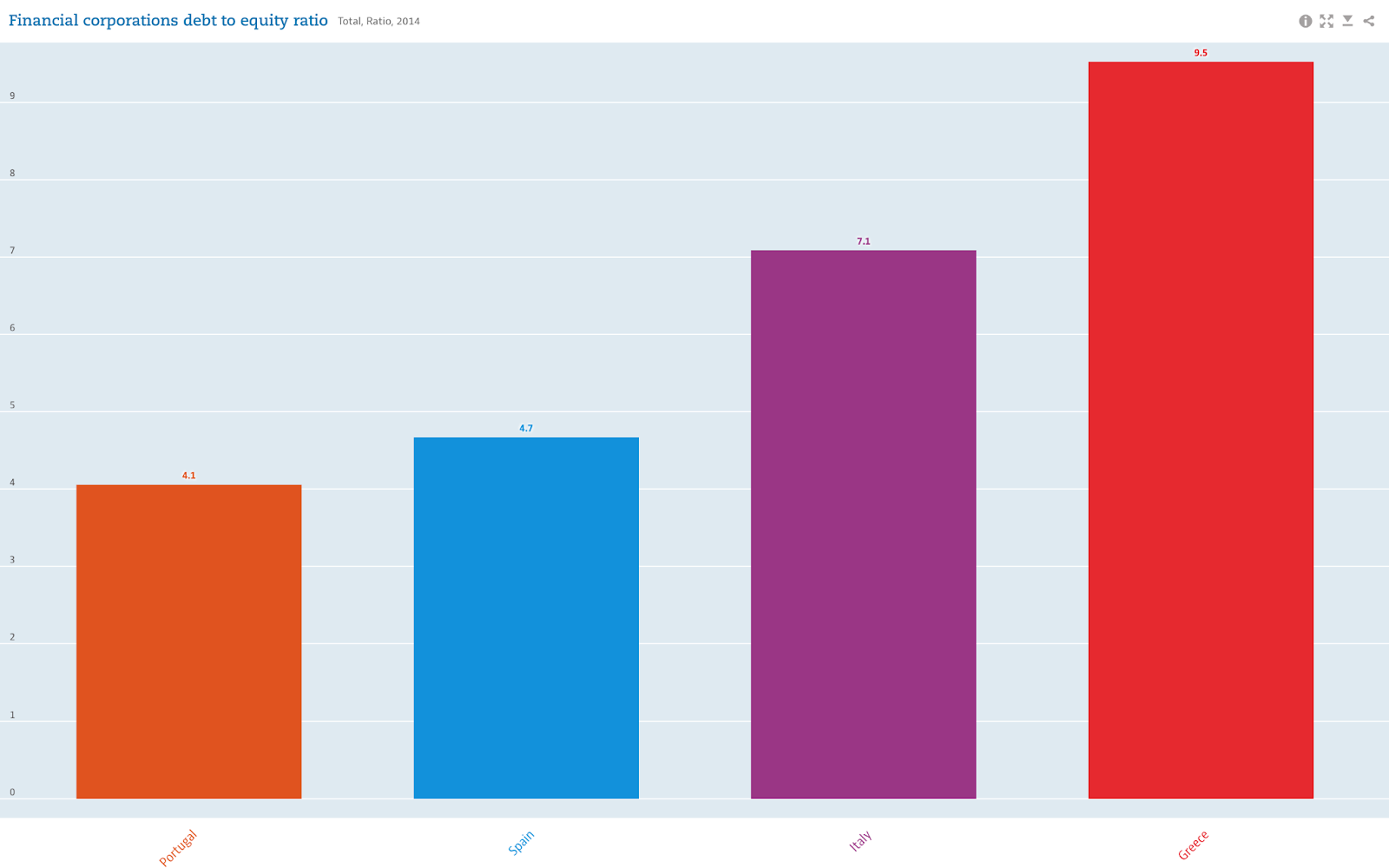 Was There A Factor Premium? 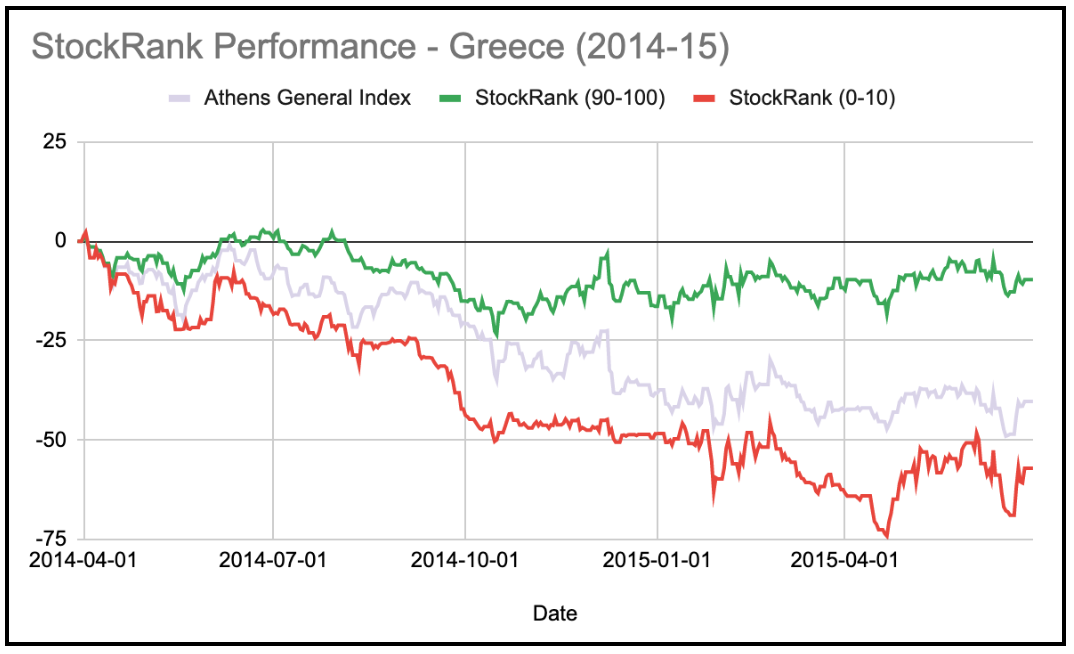 We can see that in the Greek market, the high StockRank and the low StockRank groups both generated negative returns. Does this mean the StockRanks didn’t work? It depends how you define ‘work’. Academics often try to demonstrate the effectiveness of factor investing by comparing the performance of stocks with high factor exposure to the performance of stocks with low factor exposure. For example, in 1992, Fama and French demonstrated that cheap stocks, with low P/B ratios, outperformed expensive stocks, with high P/B ratios. The value premium was the excess return of cheap stocks over expensive stocks. 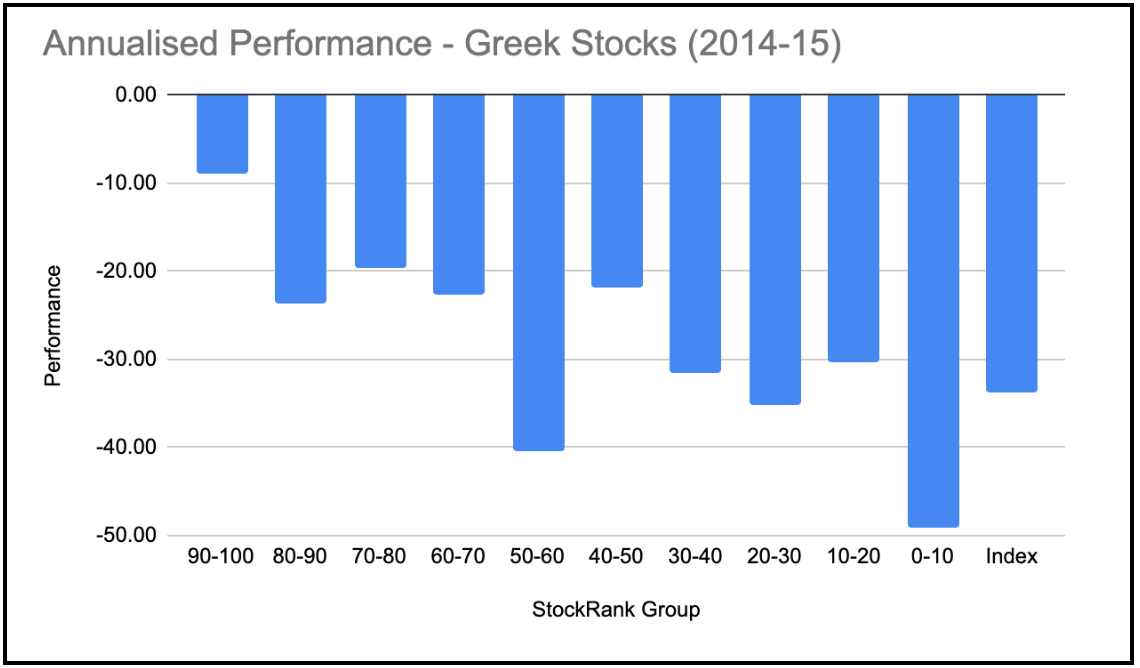 How did the StockRanks perform on an individual factor basis? The picture is a little less clear cut. By the summer of 2015, cheap stocks had pulled ahead of the Athens General Index. The market was down by around 40%. Value stocks were down by a smaller amount (20%). This suggests investors would have beaten the market by holding high ValueRank stocks. However, between March and October 2014, the basket of expensive stocks outperformed cheap stocks, as we can see here… 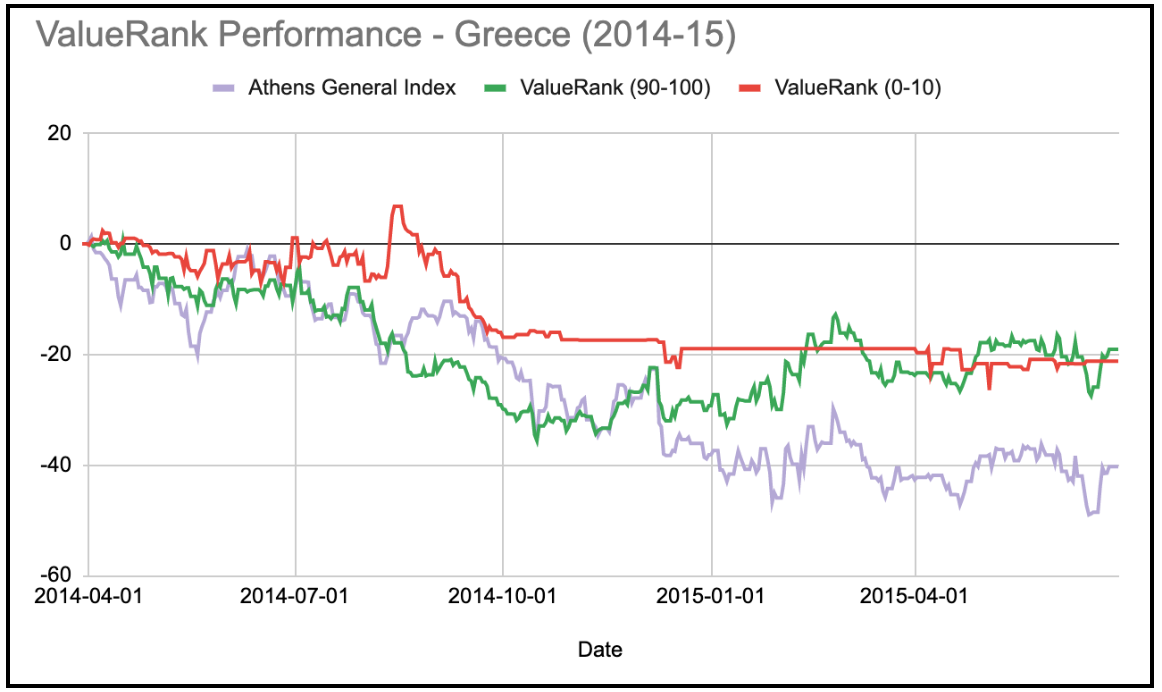 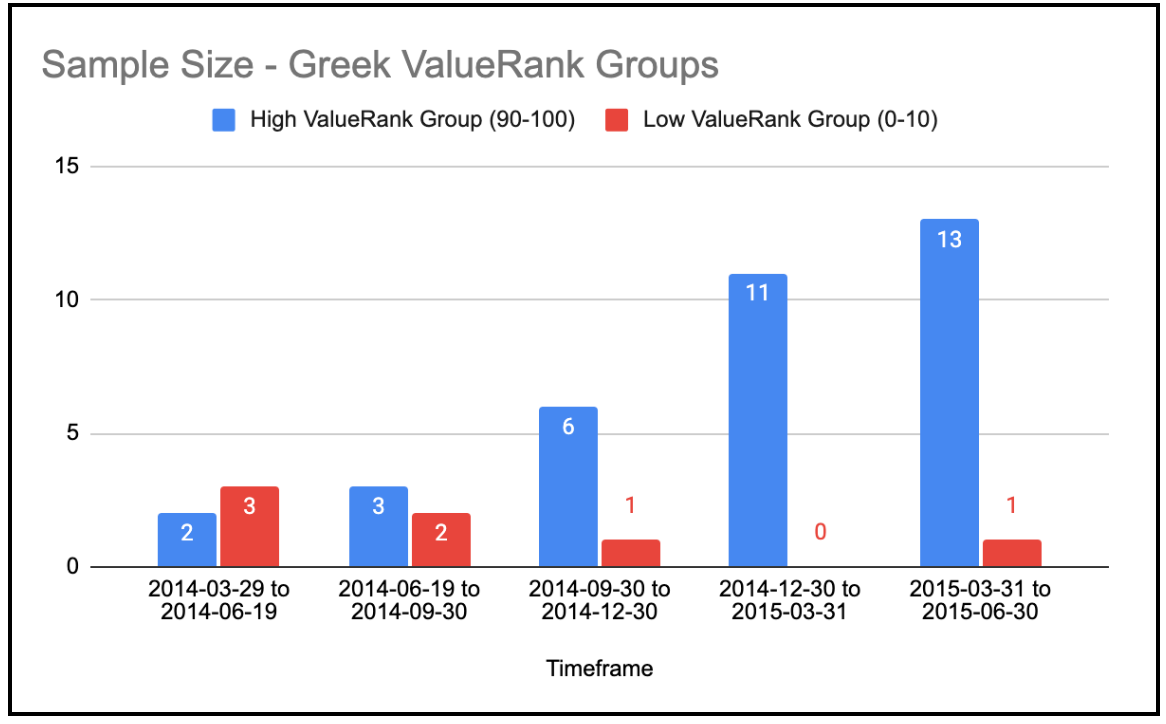 Adding In Quality and Momentum

A quick look at the charts below suggest that high QualityRank stocks beat low QualityRank stocks, while high MomentumRank stocks outperformed low MomentumRank stocks. Every group generated negative returns, but we can see clear evidence of a quality premium and a momentum premium. It is also worth noting that stocks with high factor exposure – i.e. high quality and high momentum stocks – outperformed the Athens General Index. 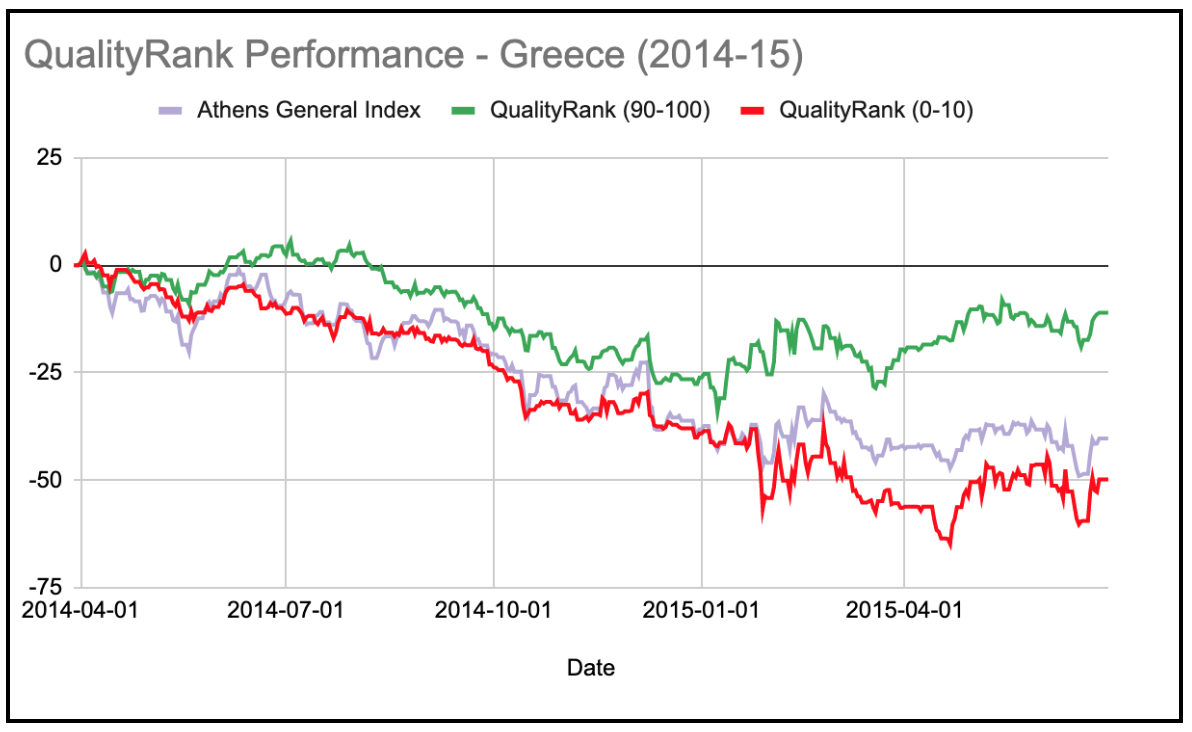 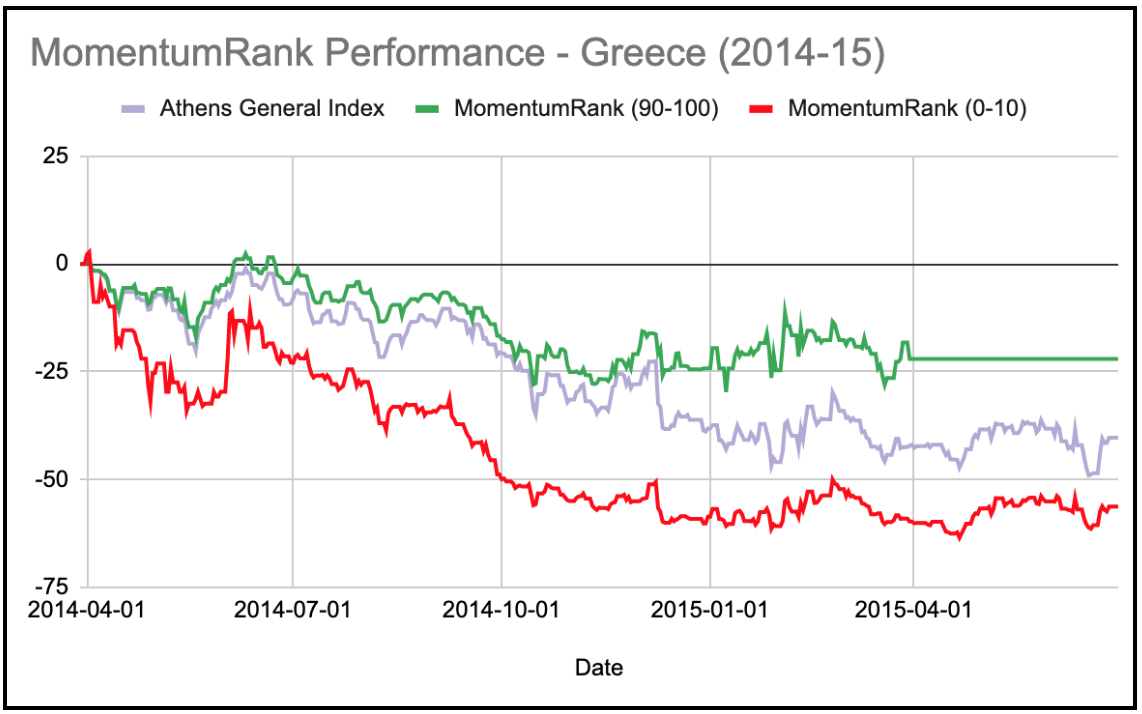 The chart below is perhaps a little more interesting. It suggests that a blended factor approach would have performed better than a solo factor approach. Blended factor investing was pioneered by James O’Shaugnessy, author of What Works on Wall Street. He showed that investing in cheap, low price-to-sales stocks generated annual returns of 14.5% between 1964 and 2009. Investors would have generated higher returns, around 17%, by using O’Shaugnessy’s composite value factor, which was based on six different value ratios, including the price-to-earnings and price-to-book ratios. 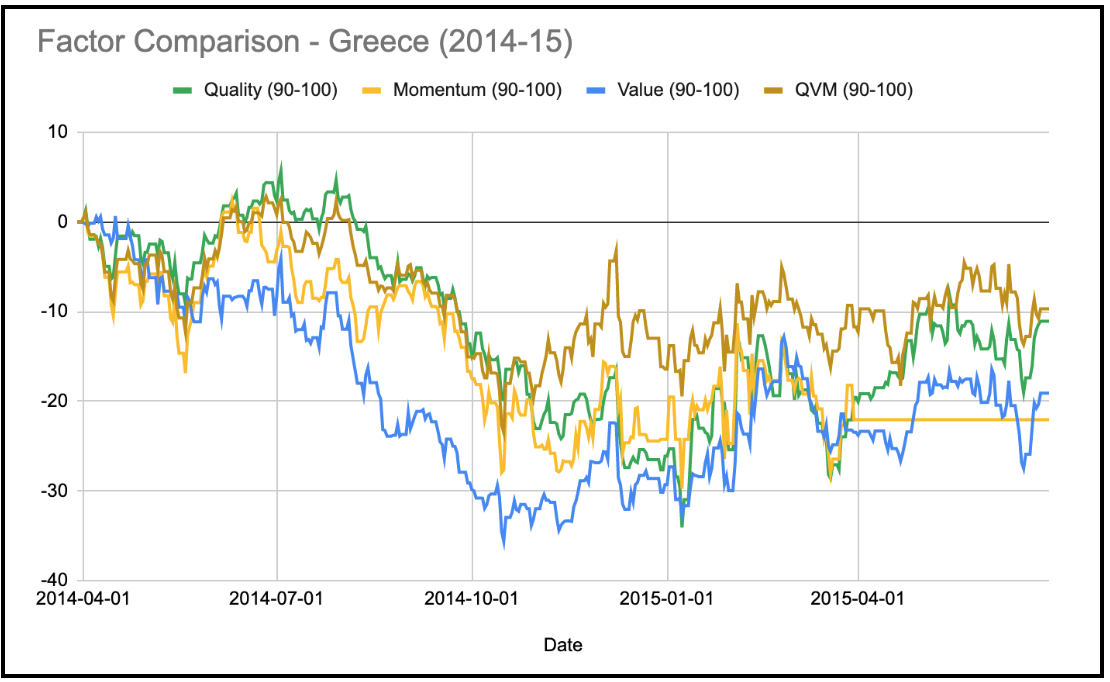 O’Shaugnessy’s composite approach inspired the StockRanks. O’Shaugnessy used various datapoints to derive a composite value score. In a similar vein, we used individual value, quality and momentum ranks to derive a composite QVM score (i.e. the StockRank). During the Greek crash of 2014-15, the composite QVM generally performed better than the individual ranks. By March 2015, high QVM stocks were comfortably ahead of high ValueRank stocks, high MomentumRank and high QualityRank stocks. Quality closed in on QVM in the final straight, but QVM crossed the line first in a photo finish. High StockRank stocks outperformed high QualityRank stocks by 1.3%.

The upshot is that when the Greek markets crashed, investors could have potentially used the StockRanks to protect wealth. The was an overall QVM premium, as well as a factor premium at the individual quality and momentum level, although the picture was less clear with regards to value. Greek stocks also had lower StockRanks in the run-up to the 2014-15 crash compared to other South European markets. Investors that want to analyse how the StockRanks performed historically in different markets should feel free to explore the performance charts here. Readers can use a number of parameters, including region and StockRank type (see below). It is not currently possible to dig down to the individual country level within Europe, but readers will be able to review the StockRank performance in Australasia, Canada, Asia, India, UK, US and Europe as a whole. 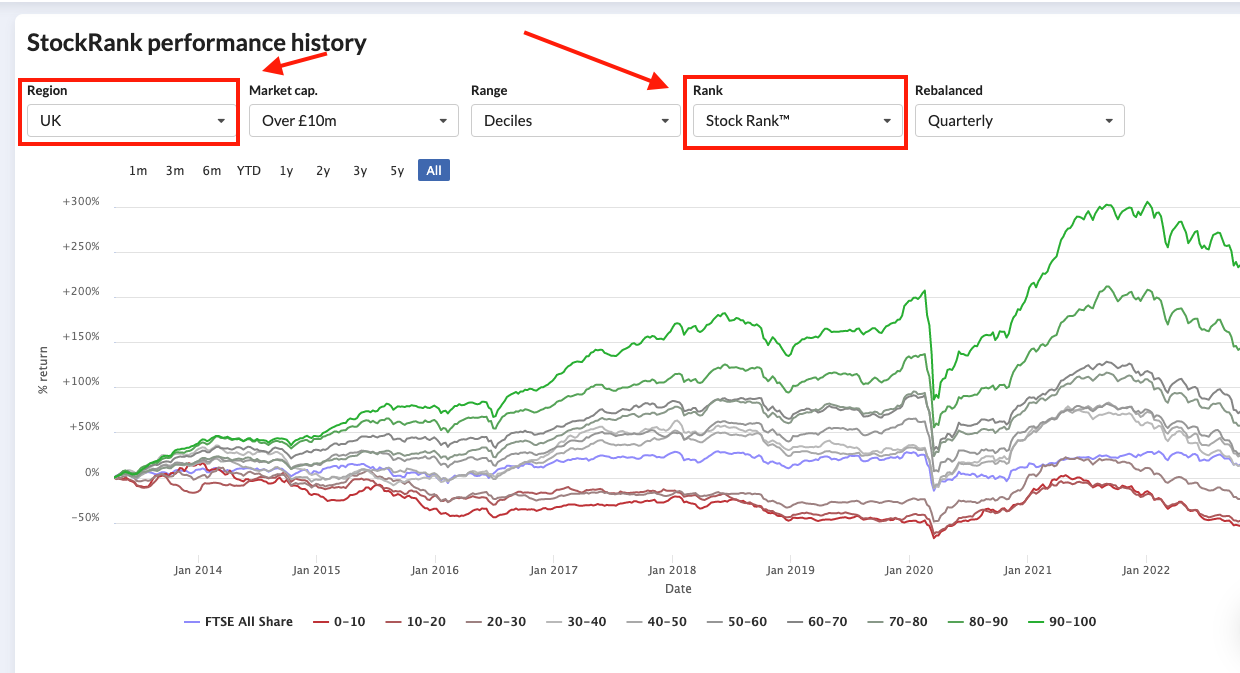