Today’s report is now finished, thank you as always for tuning in, and adding your comments, which remain of a very high standard amp; tone – not always difficult in a bear market, when everyone’s suffering. The next thrilling instalment of my podcast will go up tomorrow, summarising this week’s SCVRs! Have a lovely weekend everyone! We survived another week.

Cerillion (LON:CER) – audio is here, written summary is here. A very good company, shares have multibagged, and the CEO explains why performance has soared in the last 2 years. Shares are expensive, but for good reason it seems.

UP Global Sourcing Holdings (LON:UPGS) – audio is here, written summary is here.  This one is particularly interesting for wider read-across re supply chains. With some surprising revelations, which could be quite bullish for seeing inflation come down, and possibly some shares doing better than we might think, as supply chains normalise.

Moving on to today’s news -

DFS Furniture (LON:DFS) – as you would expect for a furniture retailer, it’s seeing more difficult conditions this year. Although today’s update says the last 2 months have improved from a weak spring/summer. It’s too early to call that a trend though. Profit guidance is for the middle of its published range. H2 weighting expected in FY 6/2023. Share buybacks funded by bank debt continue, which is madness given the macro picture. It remains uninvestable to me, due to the terrible balance sheet, so I see this share as high risk in the current environment. If I’m going to hold consumer-facing stocks through this recession, they need to have bulletproof balance sheets. And some might reasonably ask, why hold them at all?

National World (LON:NWOR) and Reach (LON:RCH) – [no section below] as subscribers have commented below, a bizarre situation emerged here last night, where small newspaper group National World (formed from the wreckage of Johnston Press) with its market cap of £54m, has announced it is considering launching a takeover bid for large newspaper group Reach, market cap £328m.

Clearly that doesn’t make sense, unless NWOR can explain how it intends to fund such a deal. If it’s a cash deal, then where is the cash going to come from? A huge equity raise, and/or debt? NWOR does have heavyweight, experienced management, so presumably they wouldn’t have made an announcement unless they’ve lined up some funding?

There’s also the issue of RCH’s gigantic pension schemes. Presumably the trustees would need to be onside, to sign off a takeover, and why would they do that, when the status quo is working fine, with RCH’s still prodigious cashflows servicing the pension schemes cashflow requirements. Hence at this stage, it all looks a bit far-fetched to me, but I’ll watch developments. [no section below]

Portmeirion (LON:PMP) – many thanks to eagle-eyed subscriber illiswilgig, who spotted an in line with expectations trading update buried within an RNS yesterday about a design partnership. I think this is reassuring, and PMP shares strike me as good value now. Thumbs up from me. Whilst obviously conscious that we seem to be entering a recession, so 2023 could be a tougher year.

[no section below] - I flagged up this company’s strong performance here in August, when some simple calculations showed that it was probably heading to smash existing forecasts. Sure enough, a strong update today has brought more broker upgrades. This company is just so impressive, with an amazing multi-bagging long term track record. The latest upgrade (it reports in US dollars) becomes 217p in sterling, so at 3,820p/share, a PER of 17.6 doesn’t look expensive. Providing of course there’s not a deep or extended recession in its core US market – there’s always the risk that we might be buying at peak earnings. But for long-term holders, prepared to ignore short term considerations, this share looks a lovely thing to hold forever maybe.

DFS Furniture PLC (“the Company” or “the Group”), provides an update on trading in advance of its Annual General Meeting later today.

This is the story so far -

5 July 2022 – CFO leaving, but sounded amicable. Trading update (my review here) sounded upbeat, with FY 6/2022 results set to be in the “upper half of the range” of forecasts. Supply chain easing.

Note that in recent months, brokers have been deeply slashing earnings forecasts, as I would expect in a consumer downturn - 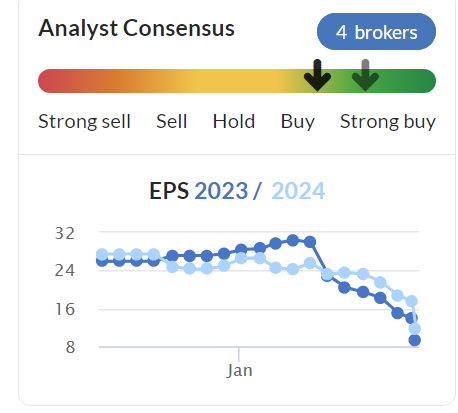 Very clear as usual (DFS stands out for giving really transparent profit guidance, I wish the same could be said of most other companies) -

Since early September we have observed a more positive trend, with Group order volumes growing relative to FY22 and also relative to the pre pandemic FY19 financial year. We have also seen continued evidence of positive market share gains from the latest Barclays / CACI market data. Our overall performance is in line with our mid case scenario (c.£36m PBT) for the full year. We would expect profits to be weighted towards the second half given the order intake profile we have seen year to date, our made to order business model and revenue being recognised on the delivery of orders to customers.

Whilst the macroeconomic outlook is uncertain and inflationary pressures remain high, we remain focussed on executing our strategy to lead furniture retailing in the digital age. Our business has proven to be resilient, and given our inherent strengths, we are well positioned to maintain our trend of market share gains across the economic cycle.

That’s not too bad, but remember forecasts have already been slashed.

I don’t know if we can call better order intake in Sept amp; Oct a “trend”. Given the macro picture, it could just be a bit of a bounce from poor trading over the summer?

H2 weighting for profit – suggests that interim results are probably going to look weak, so I wouldn’t want to be holding when those are published.

What’s missing from this update – I’d like more detail on the backlog of orders. Remember that supply chain problems meant delivery times extended for furniture retailers last year, which flattered their cash balances temporarily. Also, if they’re now catching up with deliveries, then that would flatter performance for a while, meaning that we could be seeing a time lag before lower orders translate into lower revenues.

Also we’re not told what the liquidity position is. DFS was getting near the top of its overdraft facility when last reported.

Share buybacks – this madness is continuing, funded by bank borrowings.

My opinion - I wouldn’t touch this share, given the terrible, geared balance sheet. Pity, as it’s quite a good business. Also, as mentioned by Andy Gossage of UP Global Sourcing Holdings (LON:UPGS) in my interview yesterday (transcript here, see point 7), freight rates from the Far East are plummeting, which should be a big benefit for furniture vendors.

Given the risks, I think the market cap looks way too high still. There’s a big risk that divis amp; buybacks might have to stop, due to the impending recession, and it could even be forced to raise fresh equity to prop up its extremely weak balance sheet. I cannot understand why the market just ignores these risks.

The Chairman is leaving today (previously announced we’re told), and the CFO left for a better job at Bamp;M European Value Retail SA (LON:BME) earlier this year. Maybe they can see the same financial storm clouds gathering that I’ve been warning about for a long time here?

It will be interesting to see what happens with insolvent MADE.com – DFS must be one of the front-runners to grab the brand from the administrator, probably for not much money, but that depends who else is interested.

There is a recorded webinar from 26 Sept 2022 on InvestorMeetCompany, which I’ll watch later to see if there’s anything I’ve missed. 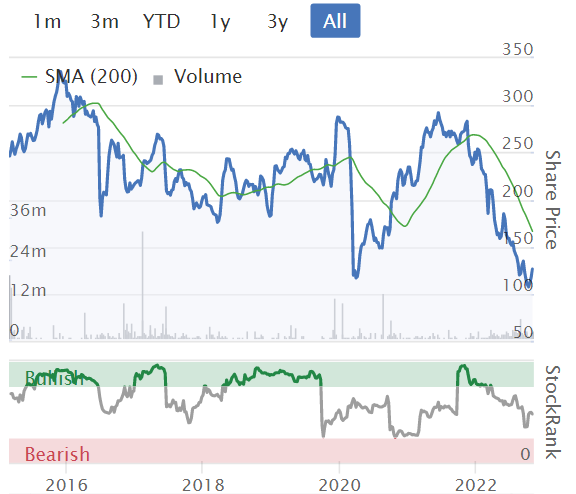 Many thanks to one of our stalwart subscribers here, illiswilgig, who spotted a trading update buried in an RNS yesterday from PMP about a design partnership. I’m ashamed to admit that I briefly started reading the same announcement when it came through on my email, but quickly dismissed it as not being of interest. Just shows, we should always read the whole announcement to the end, in case there’s something buried in it!

This really shouldn’t happen. People who write RNSs should always include “Trading Update” somewhere in the title, even if the main purpose of the update is something else.

Anyway, this is what PMP said yesterday -

As we continue through our key seasonal trading period, Group sales remain robust and further to our interim announcement on 15 September 2022 trading for the months of September and October have been in line with management expectations.

That’s good because H2 is the main period when most of every year’s profits are made. So there’s now a much stronger likelihood that PMP should meet (lowered in Sept ‘22) forecasts for FY 12/2022.

Valuation - both Panmures amp; Singers left their forecasts unchanged this week, in update notes (thanks for those). The average is 44.8p, the same as Stockopedia’s 44.9p broker consensus figure. At 310p per share, that means a FY 12/2022 PER of only 6.9.

That seems a very gloomy valuation, but perhaps people are reluctant to buy the shares, since demand could deteriorate if we get this 2-year recession that the Bank of England is cheerfully predicting amp; helping to cause.

My opinion – I continue to believe that PMP is well-managed, and has a decent strategy, to expand through new products. It’s selling a lot online now, has a strong balance sheet, and energy costs are hedged into Q1 2024, so hopefully things might be improved by then.

I think the current price could be a decent long-term entry point, with the proviso that a bad, and extended recession, could clobber its earnings in 2023. That’s the trouble with almost everything at the moment, isn’t it. Overall then, I’m tempted to start nibbling at this share. 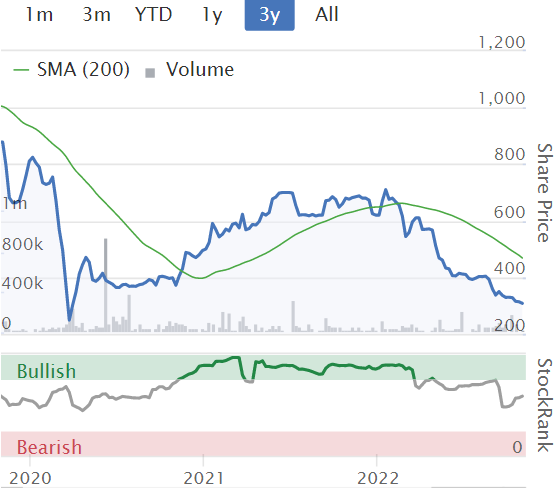