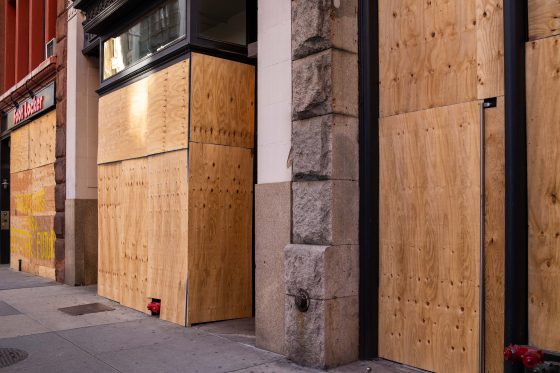 Will this be the last “somewhat normal” holiday season for U.S. retailers?  Normally, the holiday season is the most profitable time of the year for our retailers, but it has become clear that holiday spending is going to be way down in 2022.  Meanwhile, there are a couple of long-term trends that won’t be going away any time soon that are squeezing the life out of the industry from both sides.  If those long-term trends cannot be reversed, we will soon see a lot more decaying buildings with boarded up windows where thriving retail establishments once existed.  The health of the retail industry is critical to the health of the overall U.S. economy, and right now the outlook for the future of the industry is not good.

Earlier today, I came across a brand new survey that discovered that more than a third of all Americans “plan to spend less on holiday shopping in 2022”…

As inflation forces consumers to spend more on gas and groceries, about 1 in 3 Americans (34%) plan to spend less on holiday shopping in 2022 than they did last year, according to a new Clever Real Estate poll of 1,000 Americans.

Retailers have taken notice, hosting holiday sales earlier than normal and ratcheting up discounts to move merchandise. Stores want to draw attention to deals now before Americans decide to cut back further on nonessential spending — especially when 58% of the country already reports feeling worried about finances.

This is yet another sign that we are heading into a very serious economic slowdown, and it is extremely troubling news for our major retailers.

In fact, Target is publicly admitting that it has been forced to “lower its expectations” as we head into the holiday season…

Target’s profit fell by around 50% in its fiscal third quarter as it cleared through unwanted inventory and sales slowed heading into the holidays, prompting the company to lower its expectations for retailers’ most important time of year.

If all the industry was facing was a tough year or two, most retailers could survive that.

Unfortunately, there are a couple of long-term trends that are currently plaguing the industry that aren’t going to go away for the foreseeable future.

First of all, we are witnessing a tsunami of retail theft that just keeps getting worse year after year.

If you can believe it, Target just admitted that theft from their stores will “reduce our gross margin by more than $600 million for the full year”…

The discount retailer told reporters on a call to discuss its third quarter earnings results that inventory shrinkage — or the disappearance of merchandise — has reduced its gross profit margin by $400 million so far in 2022 compared to 2021.

We aren’t just talking about somebody stealing a few candy bars.

600 million dollars is an enormous amount of money.

A Target spokesperson told Yahoo Finance via email after the call the shrinkage was mostly specifically attributed to “organized retail crime.”

At this point, organized retail crime has become a multi-billion dollar industry in the United States.

Highly sophisticated gangs of thieves are robbing our retailers blind all over the country, and things are particularly bad in states such as California where penalties for shoplifting are extremely soft…

This isn’t just a problem at big-box retailers, either. The California Retailers Association has decried the rampant theft, which is hurting Golden State businesses small and large. Theft has gotten so bad in some parts of San Francisco that it is beyond belief.

“I’m new to San Francisco,” Times journalist Thomas Fuller told a grocery store clerk shortly after moving to the city. “Is it optional to pay for things here?” It sounds like an absurd thing to ask, but Fuller explains that he was genuinely forced to wonder what was going on after he witnessed people walk into Walgreens and Safeway, grab stuff, and walk out.

Shoplifting is a crime against all of us, because more of our favorite stores are being forced to shut down with each passing day.

Unfortunately, there is not an easy solution to this crisis.  The moral foundation of our society is steadily rotting away all around us, and that means that even more young people are likely to pick organized retail crime as a “career choice” in the years ahead.

Meanwhile, the stunning decline of the middle class is also a trend that is really hurting our retailers.

As I detailed in a previous article, half of all workers in the United States made less than $3,133 a month last year.

Needless to say, you can’t live a middle class lifestyle in America today on just $3,133 a month.

More people are falling out of the middle class each month, and one recent survey found that close to two-thirds of all Americans are now living paycheck to paycheck…

According to a LendingClub survey, the number of Americans living paycheck to paycheck is nearing record levels.

As of September, 63% of Americans were living paycheck to paycheck. That’s just one percentage point below the record high of 64% last spring. To put it into perspective, the number of people feeling this kind of strain a year ago was around 57%.

Once upon a time, most Americans had at least some discretionary income to spend, and life was good for our major retailers.

But now all of that has changed.

On top of everything else, a major economic slowdown is staring us in the face, and prominent companies all over the nation are now laying off workers.

Sadly, it appears that list will soon include Disney…

The company that once defined family entertainment is going from media giant to epic failure, suffering over $1.4 billion in streaming losses and a stock drop of around 39% for the year. And, it would appear that these financial declines are inevitably leading to employee layoffs.

Disney has put a freeze on hiring, it is limited employee travel and is also reviewing workers for efficiency with plans to introduce cuts as a means to make the company “more nimble.”

We live in such troubled times, and things are only going to get more difficult in 2023 and beyond.

So I would encourage you to enjoy your favorite retail stores while you still can.

Because as conditions continue to get even harsher for our retailers, many of them will soon be forced to close their doors for the last time.

The post The End Of The Retail Industry As We Know It Today appeared first on The Economic Collapse.