Is The Silver Body Paint And Outfits That Kanye West Uses In New Opera ‘Mary’ A Nod To The Silver And Blue Master’s Apron Of Freemasonry?

Kanye West is in Miami for his new opera ‘Mary’, where he was spotted with a bizarre and unique silver look.

Hollywood loves inside jokes and using arcane and obscure references that only the initiates would understand when broadcasting messages and while using predictive programming. We did an article a few weeks ago showing you how nearly every Hollywood star, for the past 60 years, has posed in photoshoots with one eye either closed or covered. This is how they hide in plain sight while at the same time broadcasting who they are affiliated with. This is a favorite tactic of the satanists, the Illuminati and Freemasons.

“Thou hast heard, see all this; and will not ye declare it? I have shewed thee new things from this time, even hidden things, and thou didst not know them.” Isaiah 48:6 (KJV)

Looking at the bizarre silver body paint and the silver and blue-hued metallic outfits of the new opera ‘Mary’ by Kanye West triggered an immediate red flag regarding Freemasonry, a close cousin of the Illuminati. A quick Google search brought me to a book called ‘The Meaning Of Masonry”, and as you can see in the photo below it is dead-on to explain the silver and blue Kanye West decided to use in ‘Mary’.

FROM DAILY MAIL UK: The 42 year old rapper was spotted wearing a baggy silver outfit with silver face paint covering his entire head. He was also seen with a number of other performers all decked out in silver from head to toe. 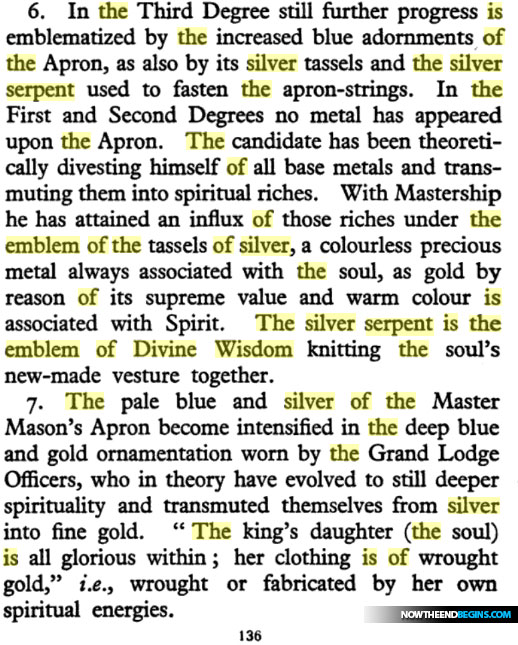 Kanye West was wearing a baggy silver one-piece that covered him from head to toe, with silver paint covering his face and hands. He also wore matching silver socks and silver slides as he arrived at the event, which was held at Miami Marine Stadium on Sunday afternoon at the final day of Art Basel.

The tweet also included a bible verse Luke 1:30-31, which read, ‘And the angel said unto her, fear not, Mary: For thou hast found favour with God. And, behold, thou shalt conceive in thy womb, and bring forth a son, and shalt call his name Jesus.’

Kanye West served as the narrator of Nebuchadnezzar, Sheck Wes, the titular Babylonian king Nebuchadnezzar, which featured musical performances by singer Peter Collins and Infinity’s Song. Kanye West also made headlines last week when it was revealed he will join will join televangelist Joel Osteen as part of his annual Night of Hope at Yankee Stadium in 2020.

Last Thursday afternoon, TMZ reported that West is teaming up with televangelist Joel Osteen yet again, as part of his multi-city tour known as America’s Night of Hope. The event will take place at the iconic Yankee Stadium on May 2, 2020, giving Ye and Osteen an even bigger audience.

But whatever you do, don’t do nothing. Time is short and we need your help right now. If every one of the 13,131 people on our daily mailing list gave $4.50, we would reach our goal immediately. If every one of our 151,781 followers on Facebook gave $1.00 each, we would reach 300% of our goal. The same goes for our 14,500 followers on Twitter. But sadly, many will not give, so we need the ones who can and who will give to be generous. As generous as possible.

The post Is The Silver Body Paint And Outfits That Kanye West Uses In New Opera ‘Mary’ A Nod To The Silver And Blue Master’s Apron Of Freemasonry? appeared first on Now The End Begins.


Source: https://www.nowtheendbegins.com/kanye-west-silver-outfits-opera-mary-master-mason-apron-freemasonry/
BeforeItsNews Announcements
Step 1: Get the Telegram App & Get Stories Direct to Your Phone or Computer Without Censorship! Get the Telegram App in the App Store or at
https://telegram.org/

Loading...
"Not by might, nor by power, but by my spirit, saith the Lord of hosts." Zechariah 4:6
Read it..
BEFORE IT'S NEWS
SIGN UP FOR OUR NEWSLETTER
Today's Top Stories
Coronavirus Outbreak: China Is Lying. Doctors Wearing Diapers. Uncensored Footage. Millions Locked Down (Videos)
Best & Taylor Urgent Intel Update (1/26/2020) — Has Depopulation Begun? — Another Simpson's Prediction?
What Are the Chinese Hiding in Wuhan?
Harvard Epidemiologist Says Coronavirus Is 'Thermonuclear Pandemic Level Bad'
Ancient Ruins Are Encoded With a Message for Everyone to See
Latest on the Coronavirus Outbreak January 27, 2020! - Must See Video
The Catalyst for WHO to Declare a Global Pandemic Over Coronavirus Just Happened!
9/11 - You Have to Understand That the Obvious Controlled Demolition of Building 7 was a Megalomaniac’s Message to the Whole World: “We Can Commit Any Crime Whatsoever & Get Away With It!“ - Great Video
Nibiru - Dr Sam.. told and Now It is Inevitable The Arrival of the Intruder Star
The Black Swan Event Begins
Loading...
Featured
Coronavirus a False Flag by Climate Change Hoaxers?
China's Lie: There Is No Wuhan Airport Lock Down Asiana Flight 909 Landed in Anchorage and Chicago After the Lockdown Date
Wuhan Coronavirus Spreading Faster Than Previously Thought
Coronavirus Prevention & Treatment, Take These Precautions
Virginia Gun Control Fight Launches ‘2A Sanctuary’ Tidal Wave
Corona Virus Now a Pandemic, Yet Mainstream Press Criminally Silent
Diana West Reports: Commies Have Infiltrated America’s Security Agencies
More Facts on 2019-nCoV, the Wuhan Coronavirus (Videos)
X22Report: We Are Watching a [Tribunal], Do You See the Pattern? We Know the Deep State Playbook - Great Video
Devastating: Pam Bondi Lays Out Hunter Biden Corruption Evidence