Peter Krauth compares silver and bitcoin and explains why he believes investors should own both.

At the risk of offending bitcoin or silver investors, I think this is a question worth asking.

I have been researching and following these assets for some time.

In my view, it’s not an either-or dilemma. You should simply own both.

I believe silver and bitcoin remain massively undervalued, and that the market fundamentals of both these assets look extremely bullish.

The point is, like bitcoin, silver goes through massive rallies. Participating in them can be very lucrative.

So let’s review the outlook for bitcoin, then draw the parallels to better understand what may lie in store for silver.

The Case for Bitcoin

Born from its modest 2009 origins in the wake of the 2008–2009 financial crisis, bitcoin has come a long way, rising dramatically in value from its early days.

Today, its influence is not only undeniable, it’s inevitable.

Consider that U.S. Fed Chair Jerome Powell recently told an IMF-hosted digital payments panel that 80% of central banks globally are exploring the issuance of a central bank digital currency (CBDC). He also said, “We do think it’s more important to get it right than to be first and getting it right means that we not only look at the potential benefits of a CBDC, but also the potential risks, and also recognize the important trade-offs that have to be thought through carefully.”

As for being first, Powell was likely responding to China’s head start, where it is already testing in select cities, and plans to launch its own digital currency later this year.

Digital versions of traditional currencies not only mean it will be easier to create more, but also to control them more. It inevitably lends further credibility to bitcoin. As investors come to realize it can’t be inflated or controlled, and has a finite total number of units (21 million) to be mined, they will gravitate toward the highly superior alternative.

That’s why bitcoin is increasingly seen as a safe haven. It has become more accessible through a growing number of cryptocurrency exchanges, and it has gained distribution through payment processors like Square (which recently bought $50 million worth of Bitcoin) and Paypal. It’s accepted by big name retailers Microsoft, Starbucks, and Whole Foods, while the list keeps growing.

And bitcoin ownership is soaring. The number of bitcoin addresses with a balance of $1,000 or more has just hit a new all-time high. JPMorgan recently said it expects over time bitcoin will grow in popularity with millennials, and Kanye West just reiterated his support for alternative currencies like Bitcoin.

Much of what’s I’ve said about bitcoin is also true for silver.

It’s not easily produced, there’s a limited supply, it’s seen by many as money, and it’s a safe haven. And it can’t be inflated. 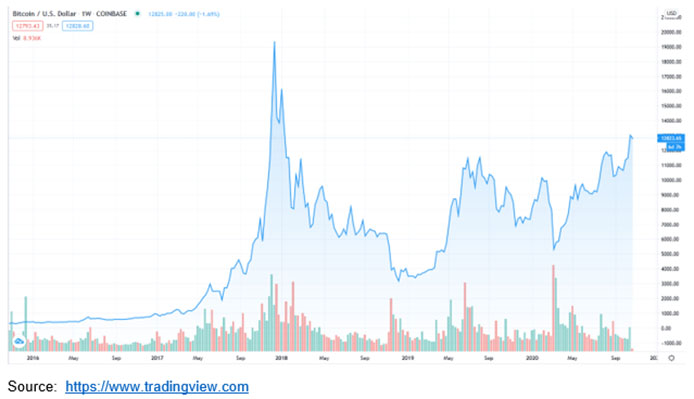 Like bitcoin, silver also goes through huge rallies which can lead to huge payoffs for investors. 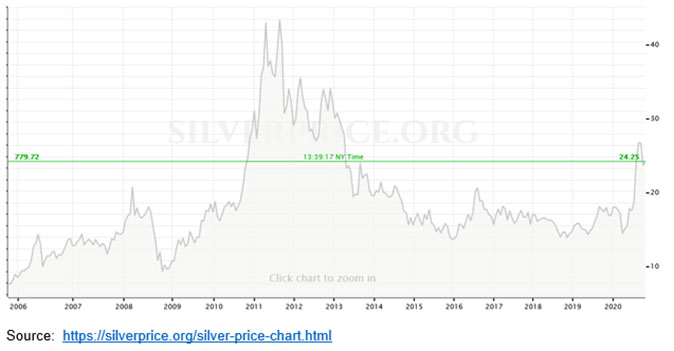 But a couple of things are different between silver and bitcoin.

For one, the “elites” don’t pay much attention to silver. It’s there, it’s relatively cheap, and it’s a small market.

Here’s perhaps one of the most interesting comparisons. According to Steve St. Angelo of the SRSrocco Report (at $1,300 gold and $20 silver), all the investment gold worldwide is worth $2.93 trillion, all mined bitcoin so far is worth $240 billion, and the total investment silver market is worth $52 billion.

My main takeaway is obviously not to pit silver against bitcoin. Rather, it’s to point out their similarities, and the opportunities they offer going forward.

Investors should not look see these options as mutually exclusive. Instead, they should simply own silver and bitcoin.

Yes, they are likely to be volatile. But they also both have wild secular bull markets ahead of them.

And that’s way more important than any differences.

Peter Krauth is a former portfolio adviser and a 20-year veteran of the resource market, with special expertise in energy, metals and mining stocks. He has been editor of a widely circulated resource newsletter, and contributed numerous articles to Kitco.com, BNN Bloomberg and the Financial Post. Krauth holds a Master of Business Administration from McGill University and is headquartered in resource-rich Canada.

Disclosure:
1) Statements and opinions expressed are the opinions of the author and not of Streetwise Reports or its officers. The author is wholly responsible for the validity of the statements. Streetwise Reports was not involved in any aspect of the article preparation. The author was not paid by Streetwise Reports LLC for this article. Streetwise Reports was not paid by the author to publish or syndicate this article.
2) This article does not constitute investment advice. Each reader is encouraged to consult with his or her individual financial professional and any action a reader takes as a result of information presented here is his or her own responsibility. By opening this page, each reader accepts and agrees to Streetwise Reports’ terms of use and full legal disclaimer. This article is not a solicitation for investment. Streetwise Reports does not render general or specific investment advice and the information on Streetwise Reports should not be considered a recommendation to buy or sell any security. Streetwise Reports does not endorse or recommend the business, products, services or securities of any company mentioned on Streetwise Reports.
3) From time to time, Streetwise Reports LLC and its directors, officers, employees or members of their families, as well as persons interviewed for articles and interviews on the site, may have a long or short position in securities mentioned. Directors, officers, employees or members of their immediate families are prohibited from making purchases and/or sales of those securities in the open market or otherwise from the time of the decision to publish an article until three business days after the publication of the article. The foregoing prohibition does not apply to articles that in substance only restate previously published company releases.