Knox Henderson profiles Riley Gold, discussing its focus on discovery and the de-risking of its Nevada projects with drill results that are just around the corner.

Most gold bugs out there are more than happy to take on the odds of early exploration and accept the equation that “greater risk equals greater reward.” After all, it’s at the point of “discovery” where investors can benefit from multiple-factor share gains. Riley Gold Corp. (RLYG:TSX.V; RLYGF:OTCQB) is one of the early-stage companies with a Nevada-proven management team and well-honed gold/silver targets that considerably reduce the risk side of that formula.

Most importantly to savvy investors, the company is tightly held and well structured so that investors can enjoy considerable share price upside should its ongoing campaign in Nevada see more love from the drill bit. Initial drill results are expected in a matter of weeks. Meanwhile, after a prolonged consolidation period, gold itself look ready for its next leg-up. Gold-watcher Kitco posted news to this effect April 26: Gold price is starting to find its ‘mojo,’ should test $1,900 before year-end, says TD Securities.

The time for worthwhile speculation on an early-stage explo-Co seeking a discovery is now. So, lets start the de-risking:

Location, location, location—First off, Riley Gold’s two projects are in the highly prolific Battle Mountain and Walker Lane gold trends of Nevada. With more than 28 active gold mines in Nevada, 4.8 million troy ounces of gold were produced in Nevada in 2019, primarily from the major gold trends: Carlin, Battle Mountain – Eureka, Getchell and Walker Lane. In 2019, the Fraser Institute ranked Nevada as the third top mining jurisdiction in the world. Enough said. 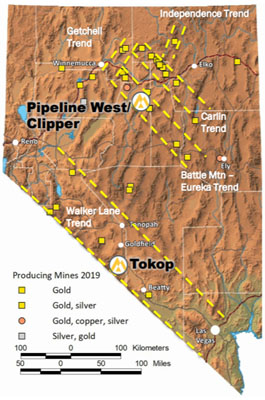 Zooming in on Riley’s flagship project, Tokop, the property sits in the heart of the Walker Lane Trend nearby the districts of Tonopah, Goldfield and Bullfrog (near Beatty, Nev.), an area that accounted for historical production of more than 8.3 million ounces gold and 143.5 million ounces of silver. 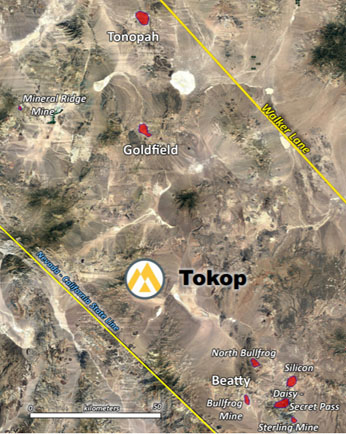 The Right Stuff—another key factor is, of course, the rocks!

Meanwhile, within a similar geological structure, historical drilling at Tokop (circa 2011 by a previous owner) has yielded impressive gold intercepts including 12 meters (m) at 2.54 grams per tonne (g/t) gold; 18m at 1.25 g/t gold, 30m at 0.72 g/t gold and 14m at 0.94 g/t gold. Trench sampling away from drilling has also returned values including 18m of 1.94 g/t gold. The mineralization is open in several directions, which lays the foundation for plenty of blue sky.

According to Riley Gold President and CEO Todd Hilditch, “These results demonstrate grade potential for both gold and silver at Tokop, as well as size potential of the mineralized system with surface rock samples extending 1.83 km from NW to SE and 3.62 km SW to NE. The results from our own sampling program have confirmed the locations for our drilling campaign which started this month.”

How Did We Get Here?

Setting out in 2019, Hilditch and his partners were disheartened by the prohibitive costs of more developed projects. They felt they could not leverage the upside of an advanced project as effectively as with earlier stage projects. “We took a long time evaluating many early stage projects, to go back to the beginning of the mining cycle,” says Hilditch. “We ultimately found these properties through our own long-standing relationships, including our lawyer, in Nevada. Tokop had been drilled about 10 years ago and had impressive historical drilling including 12 .5 m of 2.5 g/t Au. The project, due to markets and focus, ended up buried in a balance sheet of the previous operator, an Australian junior, that had drilled roughly 20 holes and was subject to an earn-in on their properties by the original Osisko, who had other much larger priorities (that led to a multi-billion dollar merger with Agnico Eagle and Yamana). We felt it checked many boxes for success in today’s market.”

By acquiring Tokop in Walker Lane and the early-stage Pipeline West/Clipper Project in the Battle Mountain Tend, Hilditch figures his team has met the sweet spot between risk, costs and the potential for more discovery. The end game is to leverage a much greater share appreciation associated with early stage discovery than investors would receive from a later stage, more costly project.

The People Are the Project

From his years of experience with Terraco Gold in Nevada, Hilditch focused on a team that knew Nevada, but more importantly understood the specific geological settings they were faced with. Local experience is essential in de-risking early stage exploration and Riley has decades of it. Here’s the team:

Todd Hilditch, CEO and Director. I first met Todd in 2018 when he was CEO and director of Terraco Gold Corp. prior to its sale in 2019, which included a 3% royalty on the multi-million-ounce Spring Valley Gold Project of Nevada. Todd has 25 years of experience in mineral exploration, mergers and acquisitions, fundraising and all other aspects of managing a public company, with plenty of knowledge of what it takes to get things done in Nevada.

Executive Chairman of the Board William Lamb served as CEO of Lucara Diamond Corp. from May 2011 to February 2018. During that time, Lamb played an integral role in taking Lucara’s flagship Karowe mine from feasibility through to a steady state, world class, operating diamond mine. He also has over 25 years of experience in the mining operations and project development industry.

“Geologist Dick Sillitoe, who spent some time on the project 10 years ago, at Osisko’s request, has recognized that Tokop appears to be a geological system akin to Kinross’ Fort Knox,” says Hilditch. “Also, Ted Wilton, who is a technical advisor to us, worked at Fort Knox as well as at Eagle/Dublin Gulch with Victoria Gold, so he also sees the geological similarity, which is a little different than what you see as ‘run-of-the-mill’ Nevada.” For the record, Wilton has managed exploration programs that discovered eight ore deposits containing more than 10 million ounces of gold in Nevada and Western Australia.

Exploration manager Charles Sulfrian is a geologist with over 35 years of experience in precious metals and energy minerals exploration and development, including more than two decades as a senior geologist and drilling supervisor at Barrick’s Goldstrike Mine in Nevada.

At the outset, Hilditch was adamant about aligning shareholders with management’s vested interest. The result is a tightly held company with only 25.6 million shares with 7.5 million warrants at $0.40 and 2.4 million options that are already mostly in the money. Strategic shareholders include Extract Capital and Stephens Investment Management (Paul Stephens), while management holds nearly 20%, leaving a tight share structure and not a lot of overhang. In fact, after closing its $3 million at 20 cents financing last October (2020), the company has held its own, now at $0.35 range and poised for a breakout should the soon-to-be announced drilling prove validated.

As an attestation to the structure and the vetted participants, the “four-month hold” period came off in March (from the October 2020 financing), and as you can see from the chart, the stock held well. With this structure, Riley Gold shares are poised for a break-out on favorable initial drill results expected soon from Tokop.

Essentially, Hilditch’s plan is to “follow-the-money.” Tokop has many high-grade gold and silver samples at surface including up to (historical) 34 g/t gold or Riley’s own 19 g/t gold and 970 g/t silver taken in the fall 2020 and released in early 2021. Channel samples, also at surface, returned 5m of 5.4 g/t gold. Riley also encountered visible gold with one of the samples. This work has led to numerous high-grade, at-surface targets.

“We’ve just initiated our drill program, announced mid-April. The goal is to try to identify a near-surface deposit, then also look for that feeder system that brought that gold up. We are permitted for 18 holes from 17 locations with possible fan holes from some of the pads. They won’t be deep holes to start, about 500–700 feet (150-200m),” says Hilditch. “We’re basically tracing what our geological team sees. Charles Sulfrian spent over 22 years with Barrick and knows what he is looking at. Starting from what he sees at surface, it’s a matter of targeting what’s going on at depth, what these veins do sub-surface, how they carry, and their orientation. We’re using core drilling only for the first 18 holes to get a better understanding geologically.”

Hilditch gives equal weight to his other project, the 100%-owned Pipeline West/Clipper project located in Lander County, in the Cortez mining district, approximately 80 km southwest of Elko. “Rather than a ‘Plan B’ we really have ‘Plan A1 plus Plan A2.’” Pipeline West/Clipper is on strike with the Nevada Gold/Barrick Cortez Complex with a gold endowment of more than 40 million ounces (past production plus current reserves and resources).

Zooming in, the Pipeline West/Clipper Project property lies just 5 km west of Pipeline Mine and only 3 km west of the Gold Acres, “a window into the carbonates of the lower plate of the Roberts Mountains Thrust.”

Geologically speaking, exploration at the project will target lower plate carbonates. That is fancy geospeak for “we’ll dig deeper.” “No drilling deeper than 250 meters has ever been conducted within most of the prospective areas of the Pipeline West/Clipper property,” says Hilditch. “With today’s gold valuation we see tremendous potential drilling 300–700 meters deep targeting high grade, Carlin-type gold mineralization.” Having another asset like this in mining-friendly Nevada provides additional risk protection for investors seek more blue-sky potential.

At less than CA$200 per meter, $3 million buys a healthy drill program in Nevada. Riley is well funded, in the right place and at the right time, with the right people who know these rocks and have made significant previous discoveries. If you missed the financing, now would be a great time to jump in.

Knox Henderson is a former equities securities trader, a journalist and capital markets communications consultant. He has advised for a broad range of small cap companies in the resource, life sciences and technology sectors for more than 25 years.