In light of this weekend’s rejection of a new constitution by the Chilean government, expert Clive Maund shares his view on how he believes this will impact companies within the region.

The new leftist government in Chile tried to foist an extreme communist-style new constitution on Chile, which was soundly rejected in a referendum at the weekend. This has bought time for the country, but having been defeated, we can presume that they will be back in a year or so, giving it another go, having made mostly cosmetic changes to their proposed new constitution.

There is believed to be an opportunity to make gains in a number of Chilean mining stocks that have been hit in the recent past by the double whammy of falling metal prices and political uncertainty that has eased to a certain extent due to the rejection of the proposed new constitution.

It is not known if this proposed constitution was rejected largely because the Chilean population has suddenly acquired some political acumen or sophistication or whether this was simply a protest against the government because they are fed up with rapidly mounting inflation and falling living standards. It is probably more due to the latter.

The Chilean leader Gabriel Boric is believed to be a WEF style “young global leader,” and a Soros protégé along the lines of Justin Castro and Jacinda Ardern, the horsey Prime Minister of New Zealand, and I believe Soros at least partly funded his election campaign. Brazilian President Jair Bolsonaro, who is one of the few politicians left who actually say what they are thinking, did not exactly ingratiate himself with the new leftist bourgeoisie of Chilean politics when he recently said that Boric was involved in the violence in Santiago in October 2019, which included the highly organized torching of metro stations, in order to destabilize the country to make it more inclined to vote in the extreme left.

This accusation, of course, met with bristling condemnation from the Chilean left. Boric behaved in a crass manner at the last Summit of the Americas in June of this year, being probably the only leader who would not wear a tie and, with John Kerry sat about three seats away from him, remarked that it was a shame that the U.S. was not represented at the summit, seemingly completely unaware of who John Kerry was. 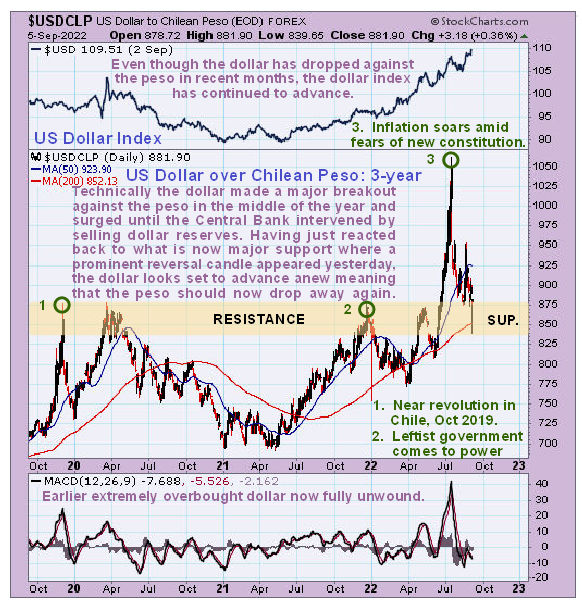 Nevertheless, the decisive rejection of the proposed new constitution at the weekend does “take the heat off” for a while, perhaps a year or two or more, and this development is thus good news for mining companies and their stocks which have been severely beaten down by a combination of the sector being in retreat and fears over the possibility of the new constitution being accepted. So there is now scope for a rally in mining stocks with operations in Chile.

Kerry quickly picked him on it. Klaus Schwab bragged that the WEF controls Argentina via its stooge president, the corrupt Alberto Fernandez, with the notorious and shameless crook Cristina Fernandez incredibly being the vice president, and it appears that the game with Chile now is to take control of it as they did with Argentina via massive IMF loans, drag it under and then asset strip the country.

A big reason for writing this article is because what is going on with the Chilean peso chart is technically interesting, but beyond that, there is believed to be an opportunity to make gains in a number of Chilean mining stocks that have been hit in the recent past by the double whammy of falling metal prices and political uncertainty that has eased to a certain extent due to the rejection of the proposed new constitution.

Now we will look at the charts for the U.S. dollar measured in Chilean pesos. Starting with the 6-month chart, we see that there was a very strong runup in the dollar versus the peso in June and July, which burned out and reversed with a prominent “bearish engulfing pattern” when Chile’s Central Bank intervened, saying that it would sell half its dollar reserves over time to support the peso, which is, of course, great until it runs out of dollars to sell and then has to go “cap in hand” to the IMF, just like Argentina did — and now Argentina is ruined and on life support, beholden to international bankers.

On this intervention and prospects of further intervention, the dollar then reacted back to strong support at the breakout point, and the reason for the reaction also appears to be that the market had already figured out from opinion polls, etc., that the populace would reject the proposed new constitution.

Once it became clear that this constitution had been soundly rejected, the peso soared briefly in the early trade Monday (dollar plunged) but then lost all its gains and actually closed down (dollar closed up), leaving behind a very large bullish “dragonfly Doji” candlestick on this chart which is thought to mark the final dollar low before it resumes advancing and it does look like the dollar is “coiling” at and above the support in readiness for renewed advance.

This is hardly surprising as, despite the new constitution being rejected, Chile is still stuck with a ramshackle collection of half-baked commies and leftists as a government that can be easily steered and controlled by powerful international forces like the IMF, the UN, and the WEF so that the country can eventually be plundered and made subordinate to their will. 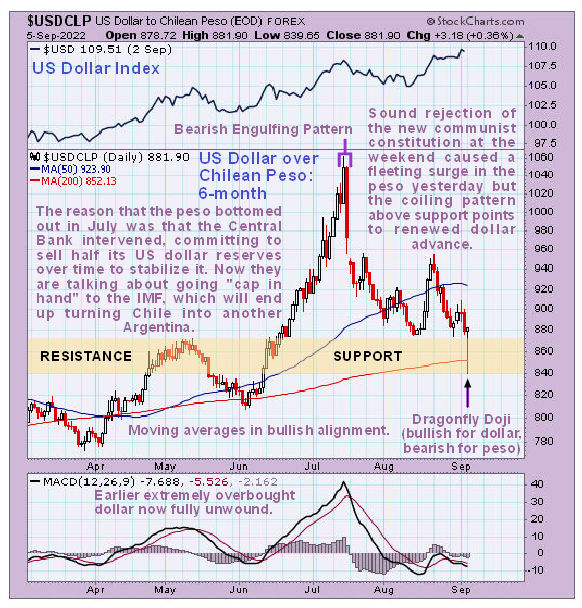 The 3-year chart shows us the technical importance of the dramatic breakout in the middle of the year, which took the dollar clear above a zone of strong resistance stretching back years to make new all-time highs, which is why, having reacted back to this strong support and to its rising 200-day moving average, it is expected to advance anew from here.

Nevertheless, the decisive rejection of the proposed new constitution at the weekend does “take the heat off” for a while, perhaps a year or two or more, and this development is thus good news for mining companies and their stocks which have been severely beaten down by a combination of the sector being in retreat and fears over the possibility of the new constitution being accepted. So there is now scope for a rally in mining stocks with operations in Chile.

Several stocks with Chilean operations that are looking attractive for a rally from here include Aftermath Silver Ltd. (AAG:TSX.V), CA$018, $0.136, Lithium Chile (LTMCF:OTCMKTS), CA$0.53, $0.417 and Red Metal Resources Ltd. (RMES:CSE; RMESF:OTCBB), CA$0.125, $0.10 whose chart looks most promising with heavy upside volume in recent weeks portending a rally. We may look at their charts in the coming days, especially Red Metal Resources.

5) From time to time, Streetwise Reports LLC and its directors, officers, employees or members of their families, as well as persons interviewed for articles and interviews on the site, may have a long or short position in securities mentioned. Directors, officers, employees or members of their immediate families are prohibited from making purchases and/or sales of those securities in the open market or otherwise from the time of the decision to publish an article until three business days after the publication of the article. The foregoing prohibition does not apply to articles that in substance only restate previously published company releases. As of the date of this article, officers and/or employees of Streetwise Reports LLC (including members of their household) own securities of Aftermath Silver Ltd. (AAG:TSX.V) and Red Metal Resources Ltd., companies mentioned in this article.