Expert Michael Ballanger of GGM Advisory reviews the current stock market, the outlook for gold, and how he believes everyone should move forward.

Exactly nine months ago this weekend, I sounded the alarm for the pending arrival of a bear market in financial assets when “The First Five Days” of the January Barometer flashed a warning signal by closing lower than the end-of-year number from the prior week.

For nearly the next eight months, I watched and read advisors, bloggers, and podcasters all chortle on and on in breathless anticipation of the emergence of the “Fed Pivot” to the extent that every sign of an abatement in the CPI numbers was met with mindless euphoria and wave after wave of buying while Wall Street insiders and corporate executives quietly and without fanfare were selling massive amounts of paper.

The volume and blatancy of insider sales were astonishingly outdone by the retail “buy-the-dipping” that results from the well-crafted Fed “script” that trains the kiddies to expect policy rescue and accompanying deliverance from portfolio purgatory.

I had been holding fast to my strategy of fading every advance while pressing bearish bets while rolling bear market profits into additional (and egregiously large) precious metals holdings, which, up until Wednesday, September 28, 2022, seemed like a pretty good strategy.

However, the landscape all changed when the Bank of England announced it was buying — instead of selling — gilts (10-year U.K. bonds), putting an immediate end to the U.K. version of quantitative tightening and rather than calling it “easing,” they simply called it “temporary” and “emergency” purchases.

What resulted was a 7% rally in the S&P 500 on mammoth volume, and while pundits dismissed it as yet another “bear market rally” that should be sold aggressively, only with the fullness of time will I know without question the veracity of the MACD buy signal shown below, 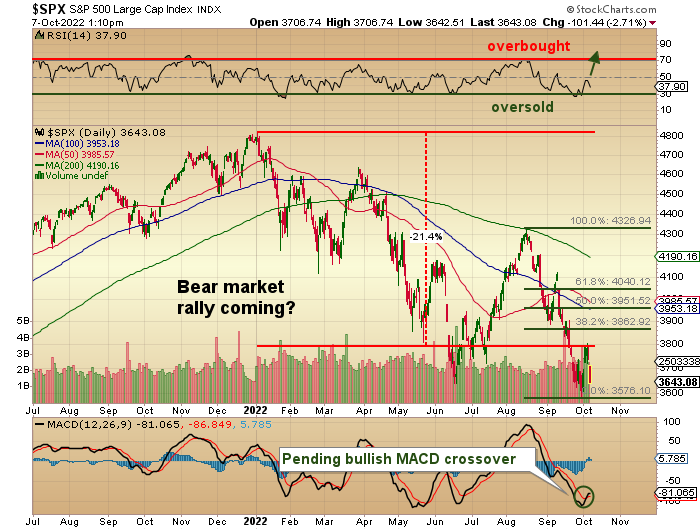 Call it a “trader’s intuition,” call it a “gut feel,” or call it a “contrarian set-up” I think that the ferocity of retail dumping and shorting is moving to “overblown” status.

I furthermore think that the Twitterverse, with all of the gold bugs delighting in the demise of every sector that was in the limelight since March 2009, remains “interesting.”

Tech, crypto, and social media — all totally trashed in the past year — are now being jettisoned like spent boosters on a NASA launch.

It still astounds me how quickly the darlings of today become the pariahs of tomorrow.

Should You Be Cautious?

I have countless times written about the difficulties in trying to pick bottoms or tops during the final parabolic “terminal” moves that characterize important turning points.

This is why I usually scale into positions in October because while market trendlines that move from gradual to vertical provide me with a sense of how close the lows are in terms of time, they do not provide me with the same sense as to price.

So if the bottoming process takes three weeks in October, I might be paying US$10 in week one but US$2 in week three, so nibbling away in tranches is a reasonable strategy.

Even if I get caught in a 1987-style crash, some of the entry points are going to be ridiculously lower than where they are once panic subsides (which it always does), and bargain hunters arrive in droves.

Make no mistake; there are dozens of reasons to be cautious but based upon everything I have learned since 1974, the first time I picked up a Wall St. Journal (understanding nothing), there are an even greater number of reasons to be optimistic as you have read in the above paragraphs.

I have told everyone to fade the markets until the Fed openly admits to a policy reversion from the current “hostile” to a more “friendly” stance.

Even a “neutral” stance would allow for a sharp relief rally lasting several months and classified as a tradable rally. 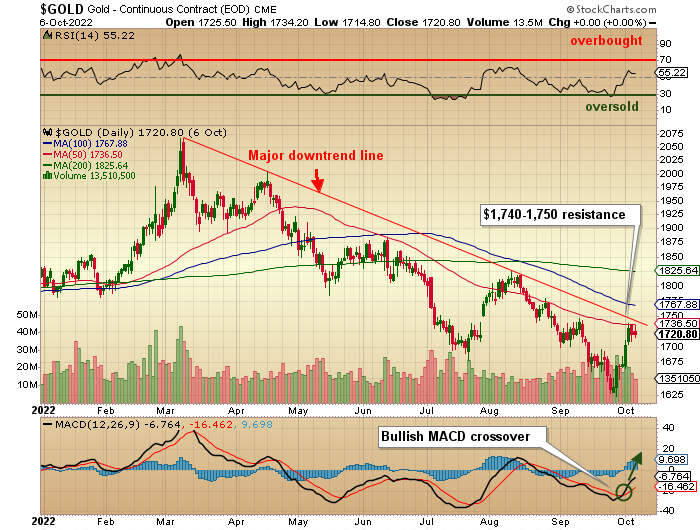 Gold is acting far better here in October than it was in September (as is silver), and while I am long both, I am modestly ahead on silver and moronically underwater on gold.

That said, I believe that once this difficult month of October is behind us, I see a rally unfolding in all risk assets, and despite the fact that the only asset class that is devoid of anything resembling counterparty risk is the physical precious metals sector, the money managers of the world choose to lump the PM’s together with growth stocks, crypto, and high-tech zombies under the label of “risk assets.”

Alas, I am neither able nor willing to debate it in the world of social media hatemongers because it is pointless. It is like the debate over precious metals manipulation; it does not matter who wins the debate when the control of price is in the hands of a few government-sanctioned bullion banks.

I continue to hold that new purchases should be in physical gold and/or silver so as to avoid inclusion in the “risky stocks” all-encompassing drawdown potential where it matters not that you are a gold and silver producer, explorer, or developer when the margin calls arrive, you get trashed.

Mind you, in 2008 and 2020, they took cash prices lower as well, which contrasted 1987 when the cash market for gold went from US$425 to US$505 in a week, while the TSE Gold and Silver Index containing all the big gold miners crashed from over 10,000 to less than half of that.

I like to add the adjective “irrationally” as in “irrationally fearful” with yet another quote in mind, and that one being from the mouth of John Maynard Keynes, who reminded us that “Stocks can remain irrational longer than we can remain solvent.”

Do you wait for the result and then move?  Do as you must, but I do not want to be short in November.

Sometimes markets can remain “irrationally fearful” much longer than I might have reasonably expected, and that is where I try to discipline myself to focus on position size.

As an example, I might be totally convinced that the S&P is going to close out the year back above 4,000 but rather than going “all-in,” I use call options with a finite dollar amount of risk rather than a fully-leveraged portfolio.

This is because if I am wrong, I will still have an ample cash position with which to react, especially if things take longer or not at all, which does happen.

There is no doubt that there is a lot of blood flowing in the streets right now, and with the fear-greed gauges at levels last seen in April 2020, December 2018, March 2009, and October 2008, I believe it is time to reduce my bearish exposures and slowly shift to a conservatively-bullish stance.

I am loaded with junior copper/gold /silver /uranium developers but have no positions in the broad market components that will have the highest “beta” in the advent of a “risk-on” shift brought about by the specter of a bullish policy reversal.

Wealth managers across the planet are all hemorrhaging, creating this torrent of Main Street gore to the extent that some very large pools of investment capital are ready to pounce.

Do not think for a minute that the mid-term U.S. elections are a factor in keeping pressure on the markets; once the Democrats are ceremoniously swept out of the House and Senate, watch for a serious rebound.

Do you wait for the result and then move?  Do as you must, but I do not want to be short in November.

Think “risk-on” because we have had nine months of “risk-off,” and the blogosphere is short up to the teeth. . .

This letter makes no guarantee or warranty on the accuracy or completeness of the data provided. Nothing contained herein is intended or shall be deemed to be investment advice, implied or otherwise. This letter represents my views and replicates trades that I am making but nothing more than that. Always consult your registered advisor to assist you with your investments. I accept no liability for any loss arising from the use of the data contained on this letter. Options and junior mining stocks contain a high level of risk that may result in the loss of part or all invested capital and therefore are suitable for experienced and professional investors and traders only. One should be familiar with the risks involved in junior mining and options trading and we recommend consulting a financial adviser if you feel you do not understand the risks involved.

3) From time to time, Streetwise Reports LLC and its directors, officers, employees or members of their families, as well as persons interviewed for articles and interviews on the site, may have a long or short position in securities mentioned. Directors, officers, employees or members of their immediate families are prohibited from making purchases and/or sales of those securities in the open market or otherwise from the time of the decision to publish an article until three business days after the publication of the article. The foregoing prohibition does not ap