In light of the controversy with FTX Corp., expert Michael Ballanger shares his opinion on current news coverage and the state of the gold market and U.S. dollar to tell you his view on the precious metals and whether he believes we are headed toward a bear market rally.

A tad over forty-two years ago, an absolute freak of a boxer named Roberto Duran lost a rematch with another fine battler named Sugar Ray Leonard when he uttered the two words “No más” and ended the bout.

As disappointed as I was to watch one of my favorite boxers (“scrapper” would be a better term) throw in the towel, I was actually appalled at the physical condition of the “Manos de Piedra” (Hands of Stone) Duran, who appeared to have ended his partying off the first bout about three days earlier.

However, the words ending the match were absolutely appropriate, and they are reminiscent of my current stance toward all this controversy and outrage surrounding FTX Corp., which is dominating the digital airwaves while swiftly becoming a major vote-getting platform for politicians. Surprise, surprise . . .

Having agonized for the past two weeks by staying away from any and all commentary regarding FTX, where disgraced former CEO Sam Bankman-Fried vaporized billions of dollars of client capital, I run the risk of violating my principle of steering clear of commentary on investments that I do not own and have no intention of owning, especially where they have been spectacular investments like Bitcoin and until recently, other crypto vehicles. 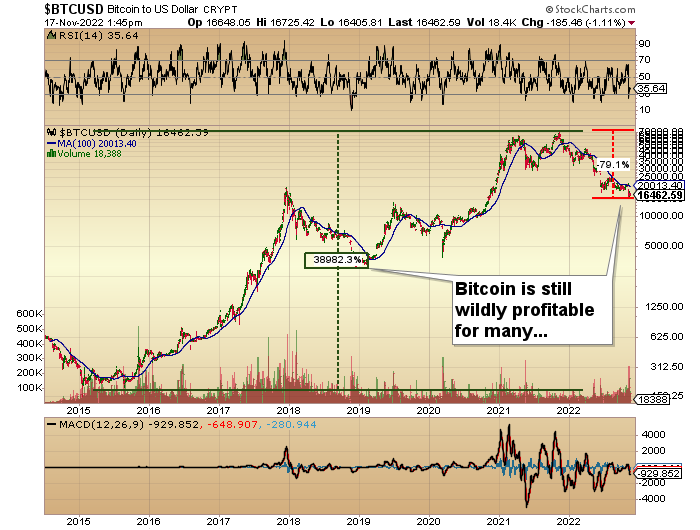 Gurus like Peter Schiff never spoke of Bitcoin until after it had become a major force and advanced from under US$300 per coin to over US$17,000 by 2017. Now, he is issuing multiple “I-told-you-so’s” despite having missed the bulk of what has been a spectacular move.

This publication, by contrast, totally missed the crypto and cannabis space and the enormous riches that bubbled forth from these sectors from 2009 until recently, and that is precisely why I have earned no right to pontificate in a space in which I am largely uninformed and totally bereft of analytical ammunition.

However, in markets like these, one needs to trust that which one buys such that despite poorly-timed entries, one maintains confidence in its longer-term utility. I have that trust in gold.

With war raging down upon those poor citizens in Ukraine and the rest of Europe, a basket case of poor planning and political incompetence, there are many places around the planet that deserve commentary rather than a frizzy-haired thief holed up in the Bahamas in a US$40 million penthouse paid for with money stolen from clients.

CNBC loves to cover stories of corporate malfeasance and romanticized larceny. How many stories were aired about Enron and Worldcom and Bernie Madoff while the bankers that nearly imploded the global banking system got off Scot-free?

The reason, of course, is money and the number of advertising dollars funneled into CNBC and Fox News makes it economically flawed to actually air a story about how Hank Paulsen convinced lawmakers to take taxpayer dollars and bail out the banks.

Is there really a difference between bankers stealing taxpayer funds and SBF stealing customer funds?

I guess the major difference is that legislation by Congress sterilized the theft by the banks, whereas the mailman in Nassau moonlighting as a regulator carries marginally less clout.

All I have to add to this discussion is two words: “No más.” 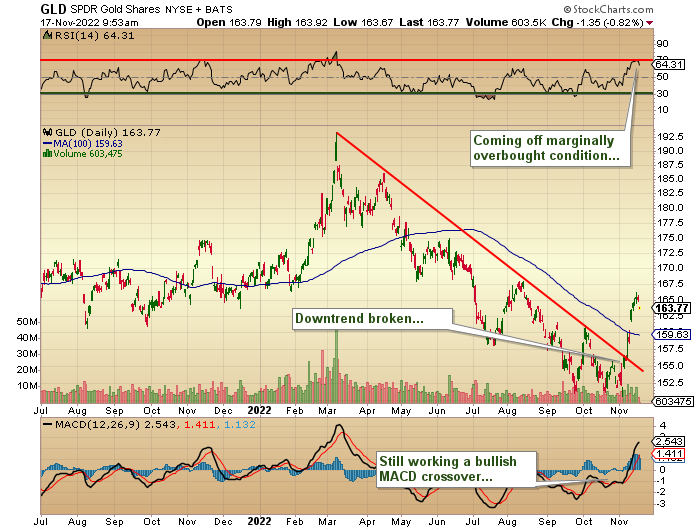 Gold is acting extremely well, and while it ran into resistance this week around US$1,800 or US$166 for the GLD:US, I see higher prices right through the New Year. What I find absolutely hysterical are the legions of stock market bears gnarling and gnashing their aching teeth while burning their fingers, pulling out hair totally ablaze with the agony of being once again locked in “yesterday’s trade.”

They tweet or post thirty or forty times a day with their agonizingly-repetitive reasons why stocks should crash, but one would think that after a five-week, 15% rally off the lows, they might throw in the towel or at least wave the white flag.

However, in markets like these, one needs to trust that which one buys such that despite poorly-timed entries, one maintains confidence in its longer-term utility. I have that trust in gold right now, largely because it has no counterparty risk assigned to it and no other individual controlling its movement.

Bob Farrell’s Rule #10 (the last in the list) is “Bull markets are more fun than bear markets.” So, to the current parade of hawkish Fed governors and regional vice presidents, I would loudly and emphatically say: “NO MÁS!”

Of course, that disincludes the bullion banks who can play around in the paper (futures) markets, but while they can sway pricing, they cannot control title, an especially critical feature of all asset classes given the events of the past few weeks in crypto.

I see gold advancing to somewhere between US$1,875 and all-time highs, with silver surpassing US$23 by year-end. Despite arm-waving protests from the blogosphere, I am afraid that the algobots controlling “flows” are going to react to the U.S. dollar as a knee bone reacts to a doctor’s rubber mallet.

Unfortunately, the days of geopolitical shock or inflation-driving demand have been replaced with the formulated orders of the code writers carrying out the directives of policy-makers and narrative designers. 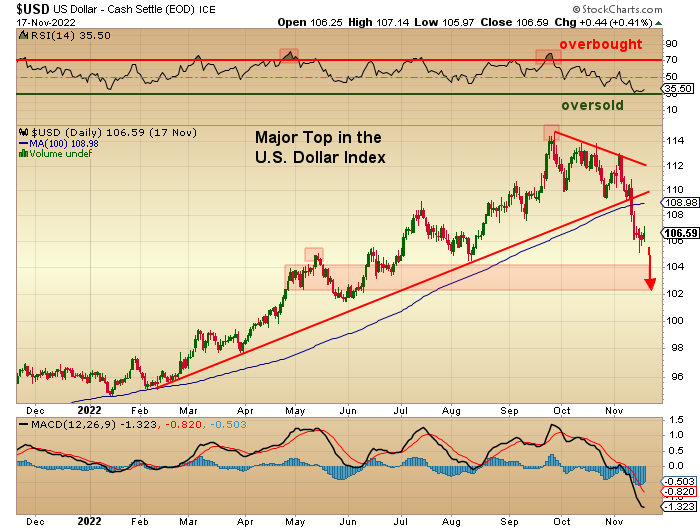 The week went out with another nice pop in the S&P 500, which I have owned since late September, but it is anemic when compared to the Dow Jones Industrials, which have far less technology and many more smokestack issues driving prices.

Action like this is more in line with bear market rallies than in new bull markets, as the Dow is far more defensive than the S&P. That said, it is also important to remember that these next six to eight weeks is a very strong seasonal period, and given the level of bearishness out there, I would not want to be short going into year-end (which is why I am not).

One concern that I have is that the Dow Jones is approaching the August highs with noticeable underperformance by the NASDAQ and the S&P500. The Dow Transports are actually outperforming the Industrials since mid-October, so insofar as Dow Theory is concerned, that is a positive.

The vast majority of market pundits are 1,000% convinced that this is yet another classic bear market rally, and it is because of the unanimity of opinion that I am keeping an open mind. Being a sexagenarian soon to be a septuagenarian, I am able to recall past mistakes, such as in 1982, after following the work of The Granville Letter since late 1978.

The former E.F. Hutton technical analyst Joseph Granville had been filling hotel ballrooms with adoring fans as he constantly lampooned traditional Wall Street analysts, referring to them as “trained chimpanzees” and featuring actual live chimps in his presentations.

Granville road the fleeting path of an investment “roll” for years and years up until the secular bottom of the bear market in August 1982, after which he fought the uptrend for months and months, blowing up his newsletter and his subscribers’ net worth in spectacular fashion.

One thing that is to be considered: every bear market bottom features “blow-ups.” Whether the FTX implosion will be remembered as that seminal event that marked the bottom of this decline remains to be seen, but it is indeed the biggest dollar-loss event of all bear markets in history, at least thus far.

Bob Farrell’s Rule #10 (the last in the list) is “Bull markets are more fun than bear markets.” So, to the current parade of hawkish Fed governors and regional vice presidents, I would loudly and emphatically say: “NO MÁS!”

This letter makes no guarantee or warranty on the accuracy or completeness of the data provided. Nothing contained herein is intended or shall be deemed to be investment advice, implied or otherwise. This letter represents my views and replicates trades that I am making but nothing more than that. Always consult your registered advisor to assist you with your investments. I accept no liability for any loss arising from the use of the data contained on this letter. Options and junior mining stocks contain a high level of risk that may result in the loss of part or all invested capital and therefore are suitable for experienced and professional investors and traders only. One should be familiar with the risks involved in junior mining and options trading and we recommend consulting a financial adviser if you feel you do not understand the risks involved.

2) The following companies mentioned in this article are billboard sponsors of Streetwise Reports: None. Click here for important disclosures about sponsor fees. The information provided above is for informational purposes only and is not a recommendation to buy or sell any security.

4) From time to time, Streetwise Reports LLC and its directors, officers, employees or members of their families, as well as persons interviewed for articles and interviews on the site, may have a long or short position in securities mentioned. Directors, officers, employees or members of their immediate families are prohibited from making purchases and/or sales of those securities in the open market or otherwise from the time of the decision to publish an article until three business days after the publication of the article. The foregoing prohibition does not apply to articles that in substance only restate previously published company releases.