The government and the telecom industry are allowed to roll out 5G without any real certainty about its health effects but the citizenry are not allowed to question it.

The Advertising Standards Authority (ASA) has banned a “misleading” advert by campaign group Electrosensitivity-UK after it wrongfully claimed that the roll-out of ultrafast 5G mobile networks could result in a range of health effects, such as “reduced male fertility, depression, disturbed sleep and headaches, as well as cancer.”

The advert itself took the form of a poster – seen in July and August 2019, which began with a headline that asked “How safe is 5G?” and featured four quotes from various “professionals” detailing their opposition to the roll-out of 5G (mobile broadband) network technology.

This is the ad: 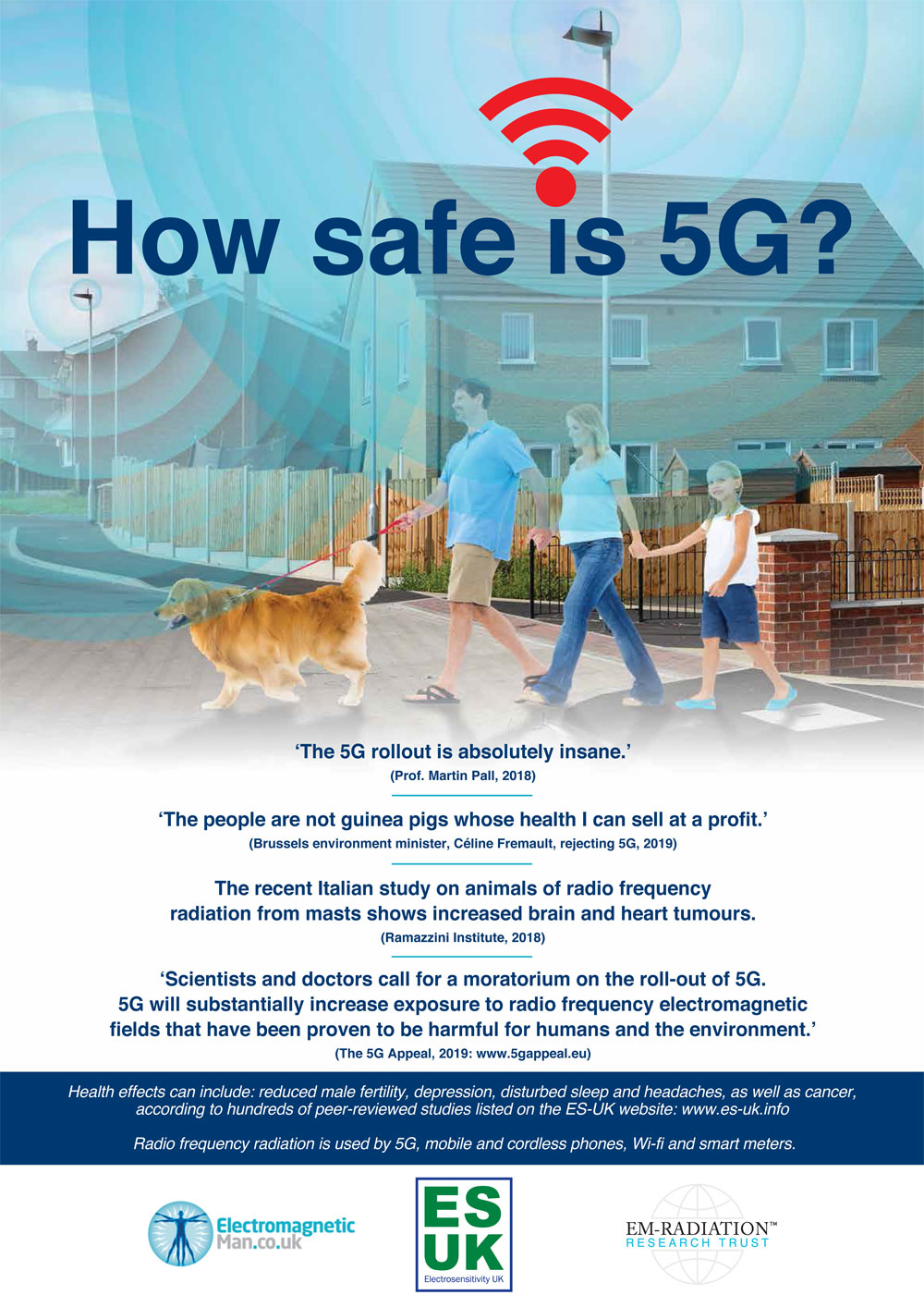 Here’s the full ruling from ASA:

The headline “How safe is 5G?” appeared above an image of a family of three walking a dog across the street and blue-coloured contours which signified 5G radio waves. Alongside the four quotes in the ad was text which included “The 5G rollout is absolutely insane” and “The people are not guinea pigs whose health I can sell at a profit”, plus further text that set out a list of “Health effects”.

The ASA considered that consumers would understand from the ad that there was robust, scientific evidence that demonstrated negative human health effects caused by 5G signals. The advertiser therefore needed to hold robust evidence to that effect, including, but not limited to, longitudinal studies with human participants.

The WHO factsheet on “Electromagnetic fields and public health: mobile phones”, which took account of several large completed and ongoing multinational epidemiological studies, including case-control studies and prospective cohort studies examining a number of health endpoints in adults, one of which was coordinated by the International Agency for Research on Cancer (IARC), determined that no adverse health effects had been established as being caused by mobile phone use. We noted the advertiser’s view that the factsheet was inaccurate. However, we considered the report formed that position based on extensive scientific examination and we understood that WHO, together with the IARC considered the available evidence fell short of being conclusive that exposure to all radio frequency radiation, of which mobile signals were a part, might cause cancer in humans. We noted that WHO were, at the time the ad was seen, conducting an ongoing project to assess potential health effects of exposure to radiofrequency electromagnetic fields in the general and working population.

The UK Government’s guidance, which took account of the most up-to-date robust evidence from WHO, the Advisory Group on Non-ionising Radiation (AGNIR) and the European Commission, had concluded that many exposure measurements had been made in the UK at publicly accessible locations near to base stations and that they had all been consistently well within the guidelines set by the International Commission on Non-Ionizing Radiation Protection (ICNIRP), recognised by WHO as an official collaborating non-governmental organisation whose aim was to protect people and the environment against adverse effects of non-ionising radiation.

We assessed the material referred to by Electrosensitivity-UK in their submissions. We considered many of the articles and studies, such as the NTP study, were not adequate because they concerned animal experiments (such as mice, rats and rabbits), rather than studies which specifically examined human health. The NTP study also assessed 2G and 3G signals, and we understood that the NTP were still in the process of evaluating the 5G network. Many of the articles provided were not studies, but reviews of the current context of research in the area. One, for example, stated that the author was “very concerned that 5G may produce effects like those we already see produced from lower frequency EMFs but are much more severe”, but said that “the only way to find out is to do biological safety testing on genuine 5G radiation”, and concluded that “we have no risk analysis or risk management because we have no risk assessment whatsoever on 5G”. Another was a YouTube video of a Canadian radio talk show in which a scientist hypothesised the extinction of life forms due to 5G radiation. That material, along with many others, lacked the robustness of an appropriately designed observational study or clinical trial, and we therefore considered that it was insufficient to substantiate claims made about human health.

For the above reasons, we did not consider that the evidence demonstrated that 5G signals caused negative human health effects and therefore considered that the ad was misleading.

There are studies coming out regularly warning of the potential dangers from Wi-Fi. Here’s the list on Electrosensitivity-UK’s website. The ASA cherry-picked a few weak links and effectively threw the rest out by suggesting they don’t prove 5G is definitively bad, yet there’s no similar insistence for the telecom industry to prove 5G is definitively good or entirely inconsequential.

Here’s a recent study from the peer-reviewed journal Environmental Research, titled: “Wi-Fi is an important threat to human health”: 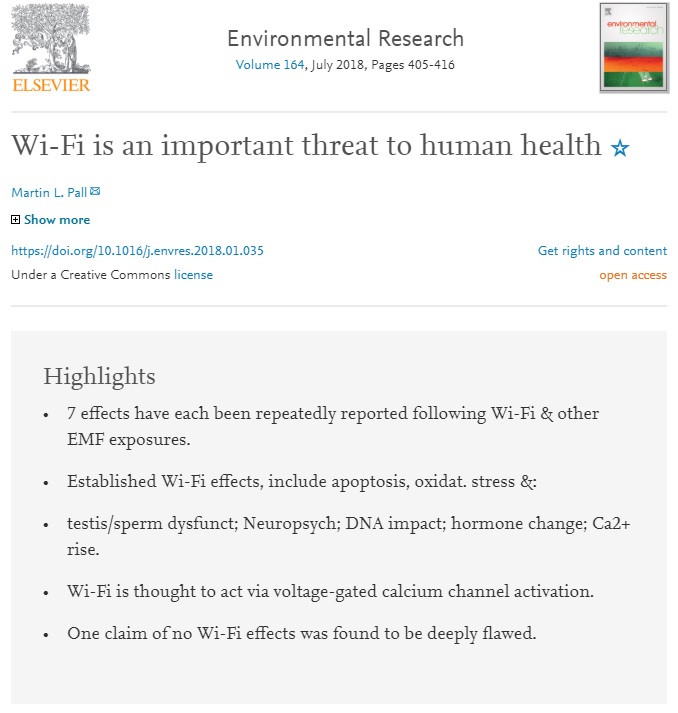 While it’s difficult to prove health effects if the effects are not particularly dramatic, there’s no evidence proving Wi-Fi in its current form is totally safe, let alone 5G.

The telecom industry is conducting a large-scale experiment on nearly our entire population; people should be allowed to question it and prevent these systems from going up in their neighborhoods if they don’t want them.

This article was sourced from Information Liberation.


Source: http://feedproxy.google.com/~r/naturalblaze/~3/WM_R8oMFl0Q/advertisement-warning-of-potential-5g-dangers-banned-by-uk-advertising-authority.html
BeforeItsNews Announcements
Step 1: Get the Telegram App & Get Stories Direct to Your Phone or Computer Without Censorship! Get the Telegram App in the App Store or at
https://telegram.org/