The coronavirus mainly affects the elderly. When two young brothers from two families have to go to ventilator in rapid succession, this is reason for doctors and geneticists at Radboud University Medical Center to look at genetic factors in the immune system. The research makes clear that TLR7 plays an essential role in the disease process. A find with potentially major consequences.

The wave of COVID-19 patients who flooded Dutch hospitals in the first half of 2020 saw an attentive physician from the MUMC + department of clinical genetics something remarkable that would be the start of important scientific research at Radboud University Medical Center. Two young brothers within the same family who became seriously ill with the SARS-CoV-2 virus and had to go to ventilator on IC. One of them died from the consequences of the infection, the other recovered. Remarkable, because especially the elderly were affected by the virus and in this case two brothers under the age of 35 were from the same family. 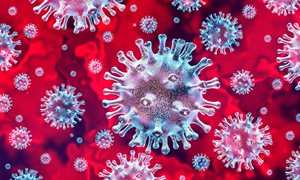 Genetic factors
“In such a case, you immediately wonder whether genetic factors also play a role,” says geneticist Alexander Hoischen. “Getting sick from an infection is always an interplay between – in this case – the virus and human defenses. It may be a coincidence that two brothers from the same family become so seriously ill. But it is also possible that a congenital defect in the immune system played an important role in them. We investigated the latter with our multidisciplinary team at Radboud university medical center. ”

An interview with the researchers can be found here

One X chromosome
All genes with a function (the exome) of both brothers are mapped. Then a possible cause is searched for. Cas van der Made, a doctor in training at the Internal Medicine department: “We mainly looked at genes that play a role in the immune system. We know that many of these important genes are on the X chromosome. Women have two X chromosomes, men have a Y chromosome in addition to the X-. So men only have one copy of the genes on the X chromosome. If there is something wrong with that, then there is no second gene that can take over that role as with women. ”

Gene identification
That study quickly revealed the gene encoding the Toll-like receptor 7, TLR7 for short. There are multiple TLR genes, but they have in common that they play an important role in recognizing pathogens and activating the innate immune system. Hoischen: “A few letters were missing in the genetic code of that TLR7. As a result, the code could not be read properly and hardly any TLR7 was made. TLR7 function has so far never been associated with a congenital immune disorder. But suddenly we now see that TLR7 is apparently essential to identify this coronavirus. So it seems like the virus can just go ahead because the immune system doesn’t get a message that the virus has invaded. Because TLR7, which must identify the intruder and then activate the defense, is not or hardly present. That could be the reason for the serious course of the disease. ”

Extra confirmation
Quite unexpectedly, the doctors and researchers at Radboud university medical center again have to deal with two seriously ill brothers with COVID-19. Both under 35 years old. Both of them also have to go to the ICU for ventilation. “Then the question of the role of the genes is even more obvious,” says Hoischen. “We also carried out the same research on these two brothers, again via the unique ‘fast exome’ diagnostic route. This time we saw no deletion, no loss of letters, but a single clerical error in the TRL7 gene. The effect is the same, because these brothers also do not make sufficiently effective TLR7. Suddenly we had four young people with a defect in the same gene, all of whom had become seriously ill from the SARS-CoV-2 virus. ”

Essential role in the defense
Van der Made and colleagues have investigated how the mechanism works. “Once activated, TLR7 produces so-called interferons, signal proteins that are essential in the defense against virus infections,” says van der Made. “This immune response is perhaps all the more important in the fight against the SARS-CoV-2 virus, because we know from the literature that this virus has tricks to reduce the production of interferons by immune cells. When we mimic an infection with the coronavirus, we see that the immune cells of the patients without properly functioning TLR7 hardly respond and that hardly any extra interferons are produced. These tests make it clear that the virus appears to have free rein in people without properly functioning TLR7 because it is not recognized. ”

Consequences
“Due to the serious illness of two brothers in two families, to which one of the young men has died, we have discovered this condition,” says Hoischen. It seems to be a very specific abnormality, an immunodeficiency, which is mainly related to this coronavirus. None of the four men have previously suffered from immune or immunity. It is the first time that we can connect a clinical picture so strongly with this TLR7. ”

“This discovery not only provides us with more insight into the fundamental functioning of the immune system, but it may also have important consequences for the treatment of seriously ill COVID-19 patients,” said Frank van de Veerdonk, immunologist and infectiologist. “The substance interferon can be given as a therapy. It is currently being investigated whether giving interferon in COVID-19 can indeed help. ” Publication in JAMA: Presence of genetic variants among young men with severe COVID-19