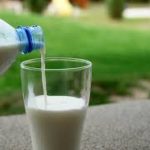 (NaturalHealth365) A frosty cold glass of milk, a tempting mound of rum raisin ice cream, a soft pat of butter melting over a stack of pancakes… for many, dairy products are almost impossible to resist.  Fortunately (for some people), after decades of being considered unhealthy, organic dairy products may not be such a bad choice after all.

In fact, despite years of misinformation from the mainstream medical community, it turns out that the saturated fat and cholesterol in quality (organic) milk and other grass-fed animal products don’t necessarily lead to heart disease after all!

But, all milks are not created equal.  A new study from Emerson University has detected pesticide and antibiotic residue in conventionally produced milk – and showcased the clear superiority of organic dairy products. Let’s take a look at the findings.

After years of semi-hysterical warnings, the truth emerges: certain types of milk really can be “good food”

Dating back to the early 1960s, scientists and doctors became convinced that milk and butter – along with meat and eggs – were contributing to heart disease.  No exception.

Then, as it is now, heart disease was the leading cause of death for American adults.  But, as people began dutifully trimming saturated fats and cholesterol-rich foods from their diet, rates of heart disease continued to soar.

Sixty years later, the connection between dairy products and heart disease has been exposed as the myth it is, with nutritionists and doctors alike acknowledging saturated fat as “benign.”

Of course, since nutrient-rich dairy products still pose an allergy risk … they are best enjoyed in moderation, as part of a well-rounded organic diet.

Study says: Antibiotics and pesticides were prevalent in conventional milk – but undetectable in organic dairy

In a study conducted by researchers at Emory University and published in Public Health Nutrition, researchers tested 18 brands of conventional milk and 10 brands of organic milk for pesticides, antibiotics and bovine growth hormones.

The study – which was the first in a decade to measure antibiotic and hormone levels and compare them by milk production type – yielded troubling results (troubling, at least, if you prefer your milk free of contaminants and synthetic pesticides).

The researchers found antibiotic and/or pesticide residues in a stomach-turning 60 percent of the conventional samples.  It’s worth noting – these residues were not detected in the organic samples.

37 percent of the conventional samples tested positive for sulfamethazine, and 26 percent for sulfathiazole. Both of these drugs have been banned in lactating dairy cows, due to concerns about their impact on human health.

Another antibiotic, amoxicillin, was so concentrated in one sample that it exceeded federal safety limits.

Keep in mind, when cows are treated with antibiotics, farmers are supposed to discard the milk until it is residue-free. Antibiotics in milk can worsen the development of antibiotic resistance in humans, which has been deemed an emerging global public health crisis by the World Health Organization.

The CDC reports over 35,000 deaths in the United States every year from antibiotic-resistant infections.

The conventional samples also contained pesticides, including atrazine, permethrin and diazinon. Most disturbing of all is the fact that 59 percent contained chlorpyrifos, a neurotoxin that has been banned from agriculture because it is associated with developmental issues in babies and children.

Finally, the conventional dairy milk contained far more bovine growth hormone – up to 20 times more, in one sample – than organic dairy. The team noted that the minimal amounts of growth hormone found in the organic dairy products were likely due to the fact that the hormone is produced naturally by dairy cattle.

Dr. Jessica Shade, Director of Science Programs for The Organic Center, noted that the study showed that the presence of antibiotics and pesticides in conventional milk is “much more prevalent” than previously thought.

It’s easy to see why organic dairy performed so much better on the Emory University study than conventional dairy.  In order to be certified as organic dairy, the milk must be produced sustainably – with no use of antibiotics, synthetic growth hormones, GMOs or conventional pesticides.

The cows must be fed an organic diet, and must get at least 30 percent of their diet from pastureland that is free of synthetic pesticides and fertilizers in the grass and soil.  In contrast, cows that are conventionally fed consume large amounts of corn and soy – more than 93 percent of which have been subject to genetic modification.

Two more “pluses” for organic farming: in addition to being measurably better for the environment, organic practices are far more humane for the animals with which we share the earth.

Another reason to choose organic dairy products is that organic milk and butter are believed to be more nutrient-rich, with higher levels of antioxidants, minerals, vitamins and beneficial omega-3 fatty acids.

For instance, grass-fed butter is richer in fat-soluble vitamin K2 than the conventional variety. Vitamin K2 helps to ferry calcium from the arteries back into the bones where it belongs – thereby reducing plaque in the arteries and cutting the risk of both atherosclerosis and osteoporosis.

Food for thought: one influential study showed that people with sufficient levels of vitamin K2 are 60 percent less likely to die from heart disease than those with inadequate levels!

Grass-fed organic milk and butter also contain higher levels of medium chain triglycerides (MCTs). There is a lot of “buzz” surrounding MCTS right now – as a study published in Obesity Research has shown that they produce leptin, a hormone that can help you avoid overeating and promote fat burning.

By the way, some natural health experts believe that raw butter, made from unpasteurized cream, is the healthiest of all. However, it is not available in all states.

Given the new study, it’s hard to imagine why anyone would choose to ingest chemical and pharmaceutical residues with their milk.  Luckily, there is an alternative.

“The choice is out there,” declares Dr. Shade, “for good, clean organic.”

The post What is the difference between organic dairy and conventional? appeared first on NaturalHealth365.

Loading...
"Not by might, nor by power, but by my spirit, saith the Lord of hosts." Zechariah 4:6
BEFORE IT'S NEWS ON TELEGRAM
GET THE TELEGRAM APP - https://telegram.org/ JOIN OUR CHANNEL - https://t.me/BeforeitsNews
Read it..
BEFORE IT'S NEWS
SIGN UP FOR OUR NEWSLETTER
Today's Top Stories
X22Report: Welcome To The 15th Round, Knockout Coming, Truth & Facts, Panic In DC! - Must Video
Tsunami Coming! Biden Shocking New Revelations Only The Beginning
Lawsuit Accuses Facebook of Watching Instagram Users Through Phone Cameras
Live Stream! War in Kentucky! Officers Down! Protests Turn Violent Civil War 2.0
SGTreport: Passion of the Christ's Actor Jim Caviezel Delivers NWO and Satan A Knock Out Blow
Sarah Westall: Military Coup! What is Planned & Names Behind the Plan - w/ Colonel Black & Harley Schlanger
Hunter Biden CAUGHT in Human Trafficking Scandal?! - Steven Crowder Must Video
Only 2% of All People Can Hear This Mysterious Sound – and Nobody Knows Why (Video)
500K Taken into Re-Education Labor Camps & Mike Pence Issues Dire Warning to America!
Crimes Against Humanity Exposed! Truth Will Be Told! - A Must Video!
Loading...
Featured
RichiefromBoston: We Are Under Attack, Act Accordingly!
Taxpayer Funding It All! New Que Drops! The Destruction of America! - Great Video
X22Report: People Are Waking up to Deep State Events! The Deep State World Control Agenda Is Failing! - Must See Claudio Grass Video
Biden Bolts Again as Desperate Reporters Try to Ask Questions Before He Goes Back into Hiding! - Great Video
Operation President Pelosi: The Democrat’s “Plan B”!
More Proof! We Are in an Economic Meltdown! - A Must Gregory Mannarino Video!
Ivanka Trump & AG Bill Barr Team up, Make Huge Announcement! - Great Video
Hillary & Bill Are Desperate! Working Overtime to Get Trump Out! Go Away Already - Great Video
The First Great Awakening: Why Am I at the White House?
New David Icke: "It's Happening - This is the Truth You Don't Know!" - Great Video
Loading...
Top Global
The Seeds Have Been Planted For The Next American Civil War. I Don’t Think Anything Stops It Now.
SGTreport: General Wesley Clark "We're Going to Take-Out 7 Countries in 5 Years"
Wanna bet that Aus’ is a testing ground for what’s coming soon?
WATCH: President Trump Slams China at United Nations: ‘China Must Be Held Accountable’
After Trump Shut Him Up, Vengeful Fauci Made NEW Sinister Plans & He’ll Stop At Nothing To Get It!
RichiefromBoston: A Major Part of Their Plan Was Right In Front Of Our Eyes
Breaking! China Warns What Comes Next In Taiwan!
BioWarfare: Chinese Communists “Intentionally” Unleashed “Frankenstein” COVID-19, Says Wuhan Scientist!
China is Spying on Millions of People & They Aren’t in China!
Massive International Banking Scandal Crushes Bank Stocks, JP Morgan, Deutsche Bank, HSBC Plunge On FinCEN Leak! - Must Video
Loading...
Top Alternative
The Mandela Effect: The Man From the 'Country' That Does Not Exist! Multiverses
Edgar Cayce: Strange Metals, Minerals and Stones... Their Magical Properties Were Noted by Cayce
The Great Conservative Migration & What it Means for the Future
Ghislaine Maxwell's Friends Predict She Will 'Sell Out' Bill Clinton as New Revelations Emerge!! - Must Video
Soros-Funded Coalition Plans to Unleash Election Day Chaos That Could Far Surpass Floyd Protests!
Biden Voters Riot, Commit Arson, Vandalism, And Attempted Murder
American Civil War Looms as Trump Reveals Intention to Ignore Voting Results
Fatally flawed COVID vaccine monkey business.
Only 2% of All People Can Hear This Mysterious Sound – and Nobody Knows Why (Video)
Civil War: The Left’s Revolution Playbook EXPOSED