BATTLE FOR WORLD | September 10, 2020: The CEO of AstraZeneca Pascal Soriot in a conference call with investors on Wednesday (Sept 9) revealed that the person who had experienced a severe reaction in its global COVID-19 vaccine trials causing it to pause, showed symptoms related to the rare neurological disorder, spinal inflammatory disorder called “transverse myelitis”.

The participant in the trial was a woman in the United Kingdom, who had suffered symptoms consistent with the disease.

The regulatory board overseeing safety and data components of the vaccine trial has reportedly confirmed that the participant was injected with the British drugmaker, AstraZeneca, COVID-19 vaccine and not a placebo. The vaccine trial was halted after a participant suffered neurological symptoms, diagnosed as multiple sclerosis. AstraZeneca maintains that the event was unrelated to the effects of vaccine.

Sky News reported that the United Kingdom Health Minister Matt Hancock referred to the halt as a “standard process” when something new needs to be investigated and confirmed, and that this was not the first instance of the trial being stopped.

(BattleForWorld: I wonder if this is related to an autoimmune response? Retroviruses are known to trigger such things. There are reports about “transverse myelitis” being reported in acute HIV infection, … AstraZeneca COVID-19 vaccine, according to the Russians is a chimpanzee adenovirus vaccine. – The documentary released with Dr. Judy Mikovits outing the United States criminal vaccine industry cabal, about vaccines being laced with properties to do other things, refer to the YouTube CENSORED: DOCTORS IN BLACK / PlanDemic, video, here.)

“We addressed the critical problem of pre-existing immunity on the efficacy of Ad-based vaccine carriers by developing vectors derived from chimpanzee-origin Ad viruses termed AdC68 and AdC7 or Pan9 and Pan7, respectively. These vaccine carriers are based on molecular clones18 thereby circumventing risks associated with potential contamination of the vaccines with unidentified pathogens of simian origin”,  … 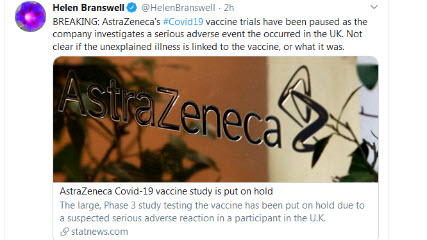