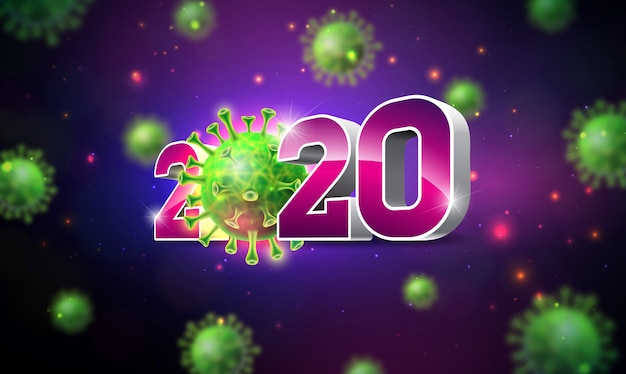 Update (1240ET): As we head into the weekend, a team of BofA analysts reflected on what was perhaps the biggest development this week, Europe overtaking the US in daily cases, while also commenting on what’s in store for the Midwest.

New COVID cases continue to surge in the US. 63,170 new cases yesterday, the highest level since the end of July. The 7-day average of new cases has risen to a two-month high of 53,280, following a 16% increase over the past week. Part of the rise is due to increased testing, with the 7-day average of daily tests edging further above 1 million. Yet, the proportion of tests returning positive remains stubbornly high at 5% (sub 1% is the standard for effective regimes in Asia). The 7-day average of Covid-related deaths in the US remains at a new three-month low of 680, but daily hospitalizations, at 1,730, have risen by 50% over the past month. This is likely in part due to a spread from college students to older people.

Cases are rising even faster in Europe. The main five European countries jumped to fresh high of 78,790 yesterday, surpassing the peak of 67,680 reached the previous day. The 7-day average of cases has risen to 57,060, a 38% growth week-on-week and up from a trough of 2,000 in early July. The latest available testing data from last week suggests that the number of daily tests conducted in the major European countries remains capped at the September level of 750,000. The 7-day average of Covid-19 related fatalities across the five main European countries has risen from a trough of 30 in late July to 370 (although remains well below the 3,300 daily deaths registered in April).

Globally, the 7-day average of new cases peaked to 343.9k, with an 11.6% increase from a week ago. The number of new cases in India has decreased to 68k, showing similar levels to 10 days prior. Brazil continues to show a decline in cases to 20k. The 7-day average of Covid-related fatalities across the globe was 5.2k yesterday.

Update (1120ET):  Italy has reported more than 10,000 new cases (10,010, to be exact) in a single 24-hour period on Friday, marking a new record high as Italy ramps up testing and imposes new restrictions on businesses, schools and movement. Italy’s total confirmed case tally is now 391,611. 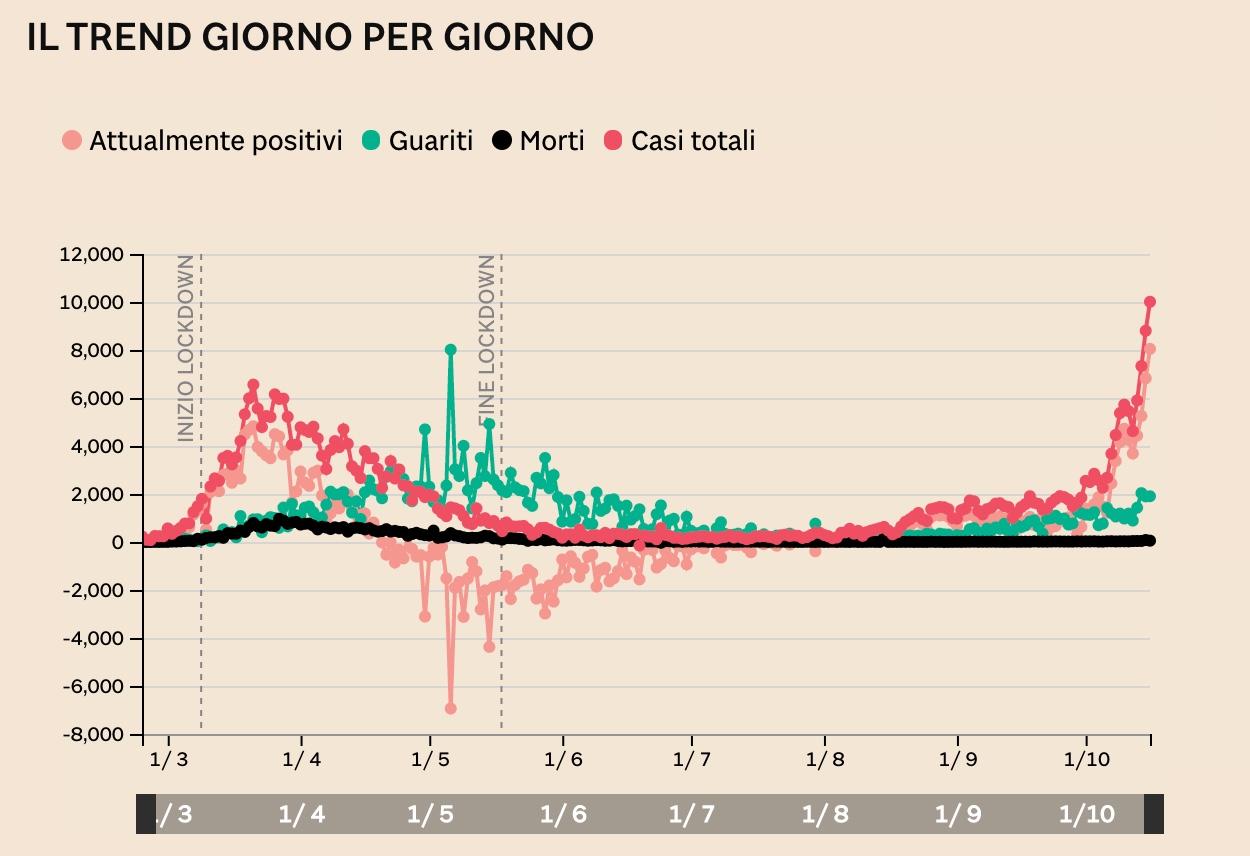 Globally, the death toll from the virus has topped 1.1 million after climbing by roughly 100,000 since the end of September.

Finally, in the UK, BoJo has taken his toughest stance yet against the mayor of Greater Manchester, who is opposing the move to “Tier 3″, calling the government’s plan “flawed and unfair”.

During a press briefing Friday afternoon, the PM threatened to “intervene” if an agreement with the local government can’t be reached.

Update (1100ET): More evidence of a worsening outbreak in Europe and the US has emerged Friday morning. Portugal Friday reported its third-straight daily record in terms of confirmed cases.

There were 2,608 new cases in a day, more than the previous record of 2,101 reported on Thursday, taking the total to 95,902, while the number of patients in intensive care units rose by 5 to 144, roughly half the peak from April.

Serbia became the latest European country to impose new virus-linked restrictions, including requiring masks “for everyone, everywhere, all the time” while in enclosed spaces. Slovenia has recorded 834 new infections, also a third-straight daily record, while the number of hospitalized patients has doubled to 242, with 45 of those requiring intensive care.

Austrian Chancellor Sebastian Kurz said in a statement that he has scheduled a meeting with the leaders of Austria’s provinces to decide how to bolster the country’s social distancing measures.

UK PM Boris Johnson said Friday that the situation in Greater Manchester is certainly “grave” as he presses to impose the highest tier of restrictions on the area, while local leaders push back, demanding more compensation from HMG to support the local economy during the period.

A series of new social distancing restrictions have been imposed across Europe this week as the Continent saw its daily number of new COVID-19 cases rocket past the US this week. But on Friday, our attention swings back to the US, where an outbreak in the Midwest has continued to accelerate; fresh daily records for new cases were recorded in Illinois, Wisconsin and North Dakota on Thursday.

The resurgence has brought the number of new cases reported across the world to record highs nine months in a pandemic that has already killed more than 1 million people around the world.

Since the start of the pandemic, investors have increasingly turned to high-frequency indicators to try and measure fluctuations in economic activity in real time. One agglomeration of high-frequency data covering topics, including overall movement, petroleum demand at the pump, new business applications, TSA checkpoint numbers and department-store sales, from JPM shows that activity has generally fallen since a summer peak, when US daily case numbers and deaths were at their lowest, and states across the US were dialing back restrictions on business activity and socializing. 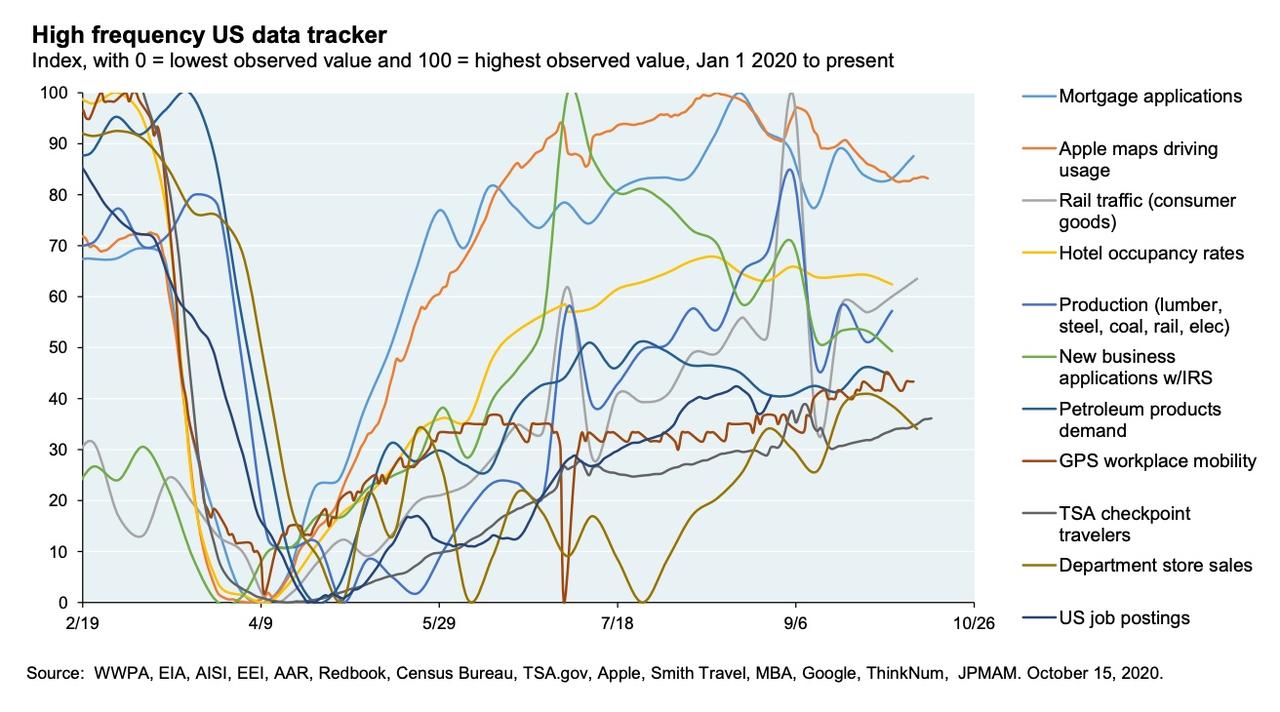 According to Bloomberg, this latest outbreak in the Midwest started in Wisconsin, and spread to other more populous states nearby. 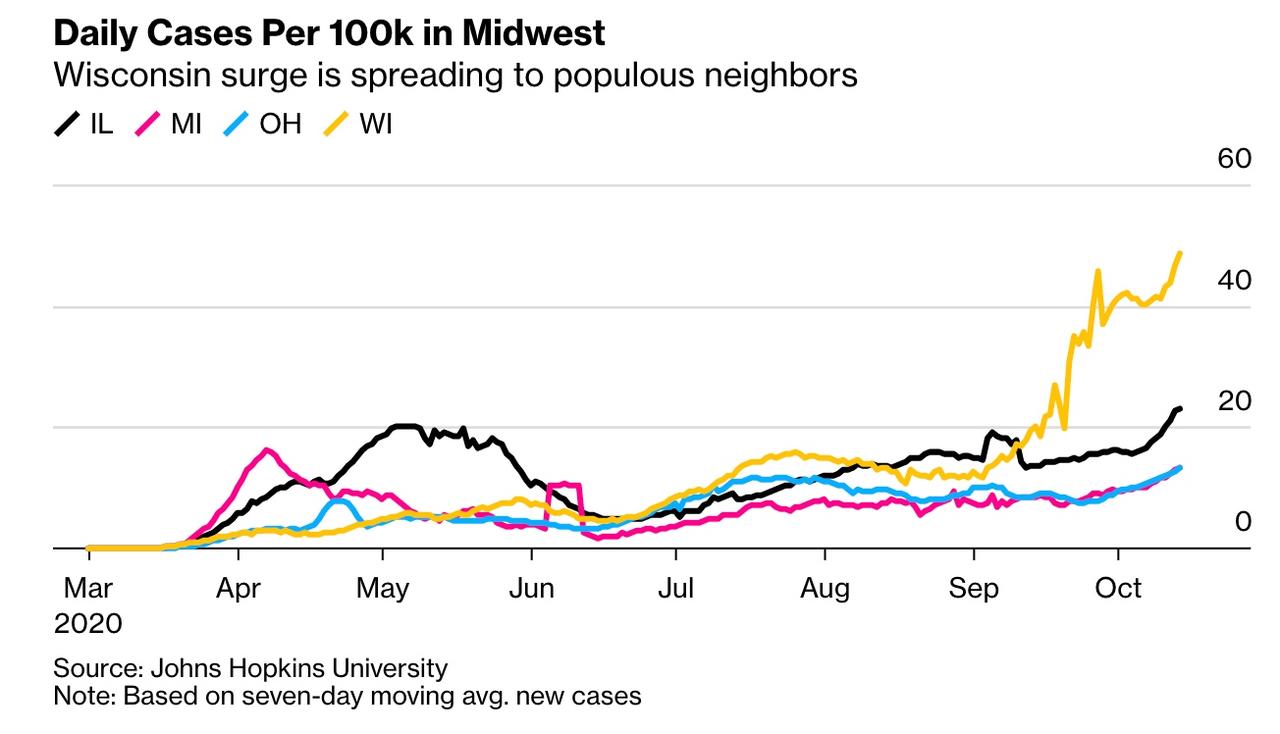 Wisconsin Gov. Tony Evers said Thursday he’ll challenge a decision from earlier in the week handed down by a Wisconsin court blocking the governor’s order limiting capacity in bars, restaurants and other public places. WI recorded a record 3,747 cases Thursday.

Deaths, meanwhile, were relatively steady at 6,189.

Another interesting trend: as the Midwest becomes the locus of the American COVID-19 outbreak, the divide between rural and urban infections has decidedly tilted toward ‘rural’ for the first time. 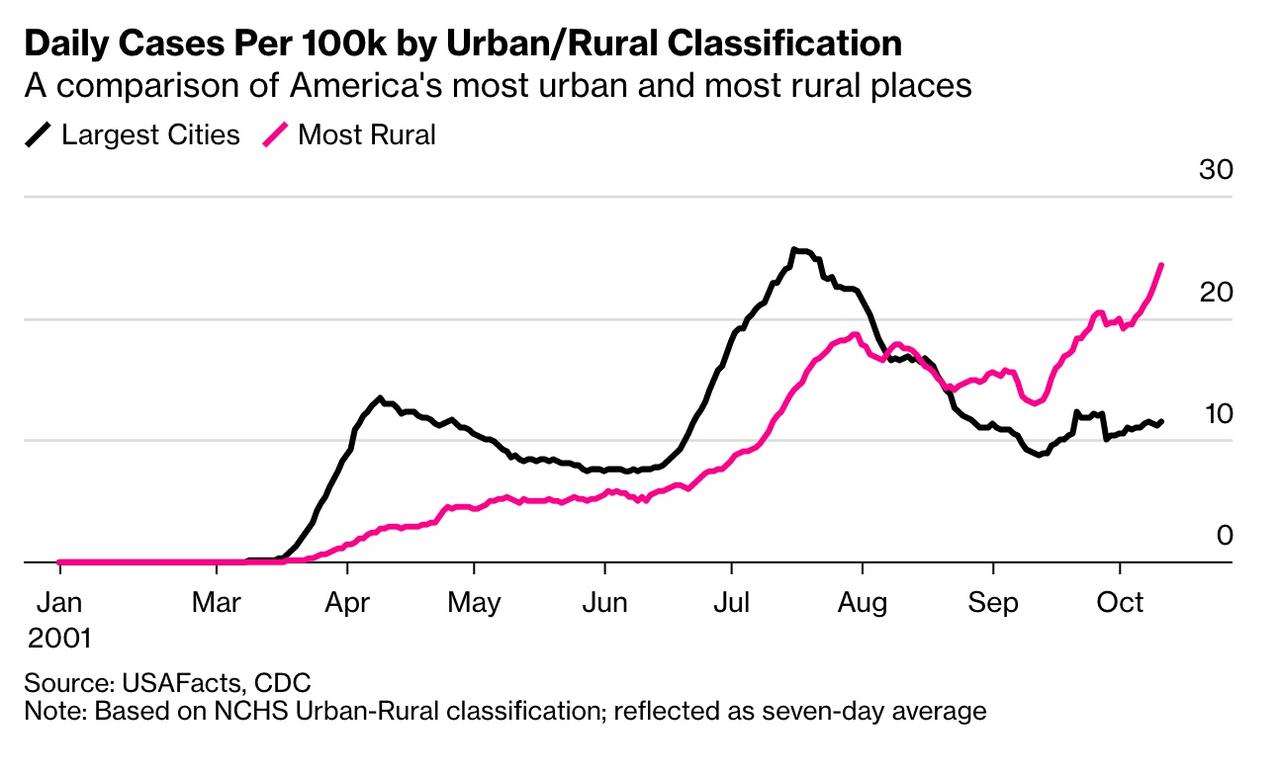 In overall viral prevalence, North Dakota, South Dakota and Wisconsin are currently leading the country. Though while the mainstream media likes to play up this phenomenon, it’s largely a function of the sparsely populated nature of the states, where workers come together in factories and meatpacking plants, often serving as the center of outbreaks.

Meanwhile, in NYC, Mayor de Blasio is claiming that outbreaks in ‘hot spots’ around the city have been contained.

However, statewide hospitalization numbers have been creeping higher.