Each year, the World Anti-Doping Agency (WADA) publishes a list of substances, including steroids, that athletes are prohibited from using. However, it can be difficult to distinguish an athlete’s natural or “endogenous” steroids from synthetic “exogenous” ones administered to boost performance.The researchers will present their results today at the spring meeting of the American Chemical Society (ACS). ACS Spring 2021 is being held online April 5-30. Live sessions will be hosted April 5-16, and on-demand and networking content will continue through April 30. The meeting features nearly 9,000 presentations on a wide range of science topics.

And regulatory bodies face another challenge: “As quickly as we develop methods to look for performance-enhancing drugs, clandestine labs develop new substances that give athletes a competitive advantage,” says Christopher Chouinard, Ph.D., the project’s principal investigator. Those designer drugs evade detection if testing labs don’t know to look for their specific chemical structures.

Chouinard’s team at Florida Institute of Technology is trying to outsmart cheaters with an assay that can differentiate endogenous and exogenous steroids and can also anticipate the structure of new compounds that might show up in athletes’ urine samples.

New assay could make it harder for athletes to conceal use of doping compounds, including “designer” drugs. 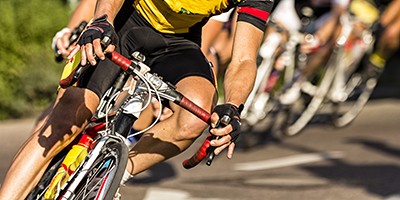 Credit: Stefan Schurr/Shutterstock.com
Currently, testing labs analyze samples using tandem mass spectrometry (MS) and gas or liquid chromatography. These approaches break up molecules in the sample and separate the fragments, yielding spectra that can reveal the identity of the original, intact compounds. But it can be tough to differentiate molecules with minor structural differences — including isomers — that distinguish endogenous steroids from exogenous ones, such as the synthetic anabolic steroids athletes take to build muscle.

To accentuate those differences, Chouinard pairs MS with ion mobility (IM) spectrometry, a separation technique he learned as a graduate student with Richard Yost, Ph.D., at the University of Florida. Yost’s team and others found that the differences between isomers could be made even more apparent if the molecules in a sample were modified prior to IM-mass spec analysis by reacting them with other compounds. After Chouinard set up his own lab in 2018, he applied this technique by reacting steroid samples with ozone or acetone in the presence of ultraviolet light — reactions already well-established among researchers who study lipid isomers, but new in the anti-doping arena.

Last year, Chouinard’s team reported they had successfully used these reactions with IM-MS to improve isomer separation, identification and quantification for a few steroids in sample solutions. Now, the researchers report they have tested this technique in urine against nearly half the prohibited steroids on WADA’s list and have shown it can successfully characterize and identify these compounds. They also showed the method can characterize and identify banned glucocorticoids, such as cortisone, that improve athletic performance by suppressing inflammation from injuries. Detection limits are below one nanogram per ml.

In addition to tracking down known dopants, the team wants to be able to find newly created illicit steroids not yet known to WADA. With Florida Institute of Technology collaborators including Roberto Peverati, Ph.D., they are developing computational modeling and machine learning techniques to try to predict the structure, spectra and other characteristics of these molecules. “If we can develop methods to identify any theoretical steroids in the future, we could dramatically reduce doping because we would be able to detect these new species immediately, without the lag time that’s been associated with anti-doping testing over the last 40 years,” Chouinard says.

Though the assays themselves are quick, simple and inexpensive, IM instruments are costly, with a price ranging up to roughly a million dollars, Chouinard notes. However, he adds, with the support of anti-doping funding organizations like the Partnership for Clean Competition (PCC), more labs might be willing to foot that bill, so long as the method offers a significant advantage in detection and deterrence.

The researchers acknowledge funding from PCC, an anti-doping research organization founded by the U.S. Olympic and Paralympic Committee, the National Football League, Major League Baseball and the U.S. Anti-Doping Agency.

The American Chemical Society (ACS) is a nonprofit organization chartered by the U.S. Congress. ACS’ mission is to advance the broader chemistry enterprise and its practitioners for the benefit of Earth and all its people. The Society is a global leader in promoting excellence in science education and providing access to chemistry-related information and research through its multiple research solutions, peer-reviewed journals, scientific conferences, eBooks and weekly news periodical Chemical & Engineering News. ACS journals are among the most cited, most trusted and most read within the scientific literature; however, ACS itself does not conduct chemical research. As a specialist in scientific information solutions (including SciFinder® and STN®), its CAS division powers global research, discovery and innovation. ACS’ main offices are in Washington, D.C., and Columbus, Ohio.

Loading...
"Not by might, nor by power, but by my spirit, saith the Lord of hosts." Zechariah 4:6
BEFORE IT'S NEWS ON TELEGRAM
GET THE TELEGRAM APP - https://telegram.org/ JOIN OUR CHANNEL - https://t.me/BeforeitsNews
Read it..
BEFORE IT'S NEWS
SIGN UP FOR OUR NEWSLETTER
Today's Top Stories
Biden Dead? The Coffin In The Whitehouse
More Comm Hints About What Is Coming in May & Later! - Must Video
A Must Watch!!! Nurse in Halifax Breaks Her Silence!
AZ Audit Adds 6 States! Q+ Trump Has Nuke Codes Controls Military! PA GA WI MI NH Next! One Falls, They All Fall!
Never Ending Story; "Sit Back, Enjoy The Show" Psyop!! Cabal Cannot Beat This!! Most Are Not Ready For This Level!!
X22Report: Are You Ready to Take Back Control of the Country? The Silent Majority Will Reign! - Must Video
Best & Taylor Intel Update (4/30/2021): The End of All Things is Close
FBI Seizes Giuliani’s Video of Clinton Hanging
Juan O Savin: The Masonic Death Cult Put "Their" Bootprint on JFK's Grave! - Must Video
New Dark Outpost: Did Obama & the Illuminati Run a Sex Trafficking Ring Out of the White House? with Jessie Czebotar
Loading...
Featured
RichiefromBoston: A Little Reminder
Urgent Video Regarding mRNA Jab Safety - Watch & Share + 18 Reasons I Won’t Be Getting a COVID Vaccine
New Charlie Ward: Confessions of an Ex Banker With Adam James
Will Politicians Be Jailed? Crimes Against Humanity, Will Women Be Infertile After the Treatment Vax? New Data Now Shows Clear Link With Astrazeneca's COVID Vaccine & Blood Clotting - Take PCR Test to the Police, What Is in It? We've Run Out os Time, Choose Your Side Now!
Greg Hunter: USA Gangster Government! +Alex Newman Must Video
Public Knowledge Times a Million! Prepare for Justice! Pray! - AWK Must See Video
Spaceshot76: Tron Future Proves Past / News Unlocks
Anonymous: This Is Getting Too Real... Why Is Nobody Talking About This? (2021)
Jim Caviezel's Recent Powerful Speech & Warning About Real Untold Εvil In Αmerica! - All Revealed - Must Video
Vaccine Synthetic Spike Protein - BioWeapon Attaches to Receptors All Over the Body! - Must Video
Top Global
RichiefromBoston: A Little Reminder
Nature’s Missing Puzzle Piece, Intended Vehicle for Transporting Minerals and Other Nutrients into Living Cells
A Must Watch!!! Nurse in Halifax Breaks Her Silence!
Zuckerberg Gobbles Up Another Big Chunk of Hawaii Beachfront
Leigh Dundas warns covid tyranny "almost a second Holocaust"
Beware of Covid PCR Testing and the Relentless “Vaccinate Vaccinate Vaccinate” Campaign
There is ‘nothing bad’ about increasing carbon dioxide: William Happer
David Icke - Human Antenna - Broadcasting The Vaccine Frequency
War begins(May 01):US Deploy 40,000 Troops & 15,000 Tanks-Aircraft-Missile Near Russian Border
The Hour is Grave in France
Loading...
Top Alternative
X22Report: Gold & Crypto Are the Barometer of an Imploding Central Bank Economy! Watch the Signal! - Lior Gantz Video
New Deborah Tavares: Super Soldiers/Species Shift/Famine Is DNA Failure
Dilara Esengil! Hollywood Gender Inversions! - McAllister TV Must Video
Is This the New Secret Space Force Craft? Whoa Watch This! 2021
Mile Wide! Who Could Have Imagined We Would See UFOs Like This! 2021
Freedom Force Battalion: Full Lunar Eclipse Blood Moon - Has Nothing to Do With the Cabal Destruction
Nature’s Missing Puzzle Piece, Intended Vehicle for Transporting Minerals and Other Nutrients into Living Cells
Biden Dead? The Coffin In The Whitehouse
Tucker Carlson: The GOP Disconnect
Pentagon DOD Briefing Re: Chemical Lobotomy Virus For "Religious Fanatics”. Alan Watts: You Have To Hate The New Mandate And The Plan To Use Vaccines To Immobilize And Cull The Population! Eustace Mullins: Murder By Injection! Must See Videos!