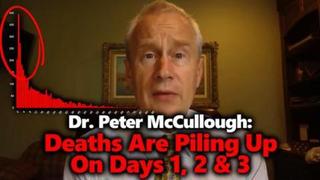 (Natural News) Dr. Peter McCullough, one of the world’s premiere medical doctors who specializes in treating the Wuhan coronavirus (Covid-19), told journalist Alex Newman during a recent interview that the United States government is lying about the true number of Chinese Virus vaccine reactions that are occurring.

The government’s strategy, McCullough says, which is coordinated with the Bill & Melinda Gates Foundation and the World Health Organization (WHO), has resulted in tens of thousands of unnecessary deaths that are being ignored or swept under the rug. This is unprecedented because the government has pulled past drugs and vaccines from the market for far less.

Between Dec. 14 and April 23, Donald Trump’s “Operation Warp Speed” jabs caused at least 3,544 deaths along with 12,619 serious injuries. Neither the Food and Drug Administration (FDA) nor the Centers for Disease Control and Prevention (CDC), however, are at all concerned.

“A typical new drug at about five deaths, unexplained deaths, we get a black-box warning, your listeners would see it on TV, saying it may cause death,” McCullough stated. “And then at about 50 deaths, it’s pulled off the market.”

Back in 1976 during the “swine flu” crisis, the U.S. attempted to jab some 55 million Americans but stopped the program after 500 cases of paralysis and 25 deaths were reported. Compare that to the Wuhan Flu shots of today, which are still being aggressively pushed despite untold thousands of injuries and deaths.

“In the U.S. today [as of late March] we have approximately 77 million people vaccinated for COVID and we have 2,602 deaths reported, so it’s unprecedented how many deaths have accrued,” McCullough further explained.

“Then on March 8 the CDC announced on their website with very little fanfare that they had reviewed about 1,600 deaths with unnamed FDA doctors and they indicated not a single death was related to the vaccine. he added. I think that was concerning in the academic community.”

Had the CDC truly conducted such an investigation, McCullough says, it would have taken months to complete. Instead, the CDC rolled it out in a matter of days to declare all of the jabs “safe and effective” so the program would continue.

“I have chaired and participated in dozens of data safety monitoring boards and sat on those committees and I can tell you that this type of work would have taken many months to review all the labs, the death certificates and all the circumstances of an event,” McCullough explained.

“It is impossible for unnamed regulatory doctors without any experience with COVID-19 to opine that none of the deaths were related to the vaccine.”

Another factor to consider is that only about 1-10 percent of all vaccine-related deaths even get logged into the CDC’s Vaccine Adverse Event Reporting System (VAERS). This suggests that many thousands more deaths are not even included in the official numbers.

Even without this missing data, Chinese Virus injections are already proving to be far more dangerous than seasonal flu shots. Every year, 20-30 deaths from flu shots are reported to VAERS based on 195 million injections. Wuhan Flu shots, on the other hand, have already caused at least 2,602 deaths based on 77 million injections.

“So the U.S. government has made a decision, along with the stakeholders – the CDC, NIH, FDA, Big Pharma, World Health Organization, Gates Foundation – they have made a commitment to mass vaccination as the solution to the COVID pandemic and we are really going to be witness to what’s going to happen in history,” McCullough warns.

“We’re sitting on, right now, the biggest number of vaccine deaths, there’s been tens of thousands of hospitalizations, all attributable to the vaccine, and going strong.”

More related news can be found at Pandemic.news.