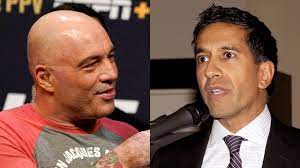 CNN is in damage control after its chief medical correspondent and notorious Covid-19 experimental vaccine pusher, Dr. Sanjay Gupta was humiliated on The Joe Rogan Experience when he was confronted for the obvious lie about Joe Rogan taking “horse dewormer” which was actually Ivermectin.

The humiliation of the CNN medical correspondent has went viral since the interview.  Newsweek reported the day after the show that “In a clip shared on social media, which had been viewed more than 800,000 times as of Thursday morning, The Joe Rogan Experience host grilled Gupta over CNN reports that criticized his taking the drug ivermectin after being diagnosed with the disease.”

The report also said that “Rogan announced in September he had contracted the virus on Instagram and told his followers he “threw the kitchen sink” at it the disease, with the drug among treatments he used.”

Here is the clip from ‘The Joe Rogan Experience’:

CNN’s Don Lemon was trying to cover the lies of his network according to Fox News “CNN anchor Don Lemon was on the defensive Wednesday night after podcast giant Joe Rogan accused his network of “lying” about his COVID treatment” continued “Rogan confronted CNN’s chief medical correspondent Dr. Sanjay Gupta over the network’s coverage of his bout with the virus, falsely claiming Rogan used “horse dewormer” instead of the common human form of ivermectin, something Gupta conceded his CNN colleagues should not have said.”

Rogan asked Gupta “Does it bother you that the network you work for out and out lied, just outright lied about me taking horse dewormer?” Gupta’s response “They shouldn’t have said that,” Then Rogan asked “Why did they do that?”. Gupta responded with “I don’t know.” Rogan quickly responded with “You didn’t ask? You’re the medical guy over there!”  Gupta pathetically admitted “I didn’t ask” Gupta said, “I should’ve asked before coming on this podcast.”

The mainstream media (MSM) is in freefall collapse and that’s why Big Tech monopolies including Twitter, Facebook, Google and YouTube  jumped in to its aid and censored the alternative media.  We were humiliating the MSM, in fact the alternative media was destroying what credibility they had left.

Despite what Big Tech has done, the American people and others from around the world still don’t trust the MSM except for the diehard Democrats based in the U.S.  According to a Gallup poll article from earlier this month, “Americans’ trust in the media to report the news fully, accurately and fairly has edged down four percentage points since last year to 36%, making this year’s reading the second lowest in Gallup’s trend.”  Not surprising, the Democrats have a lion’s share of trust when it comes to the MSM “Partisans’ trust in the media continues to be sharply polarized. Currently, 68% of Democrats, 11% of Republicans and 31% of independents say they trust the media a great deal or fair amount.”

Joe Rogan did a sensational job in exposing MSM lies.  CNN is at a crossroads where its viewership is in freefall collapse.  I still cannot wrap my head around the fact that the MSM especially CNN, MSNBC and the New York Times are still in business but I understand that Big Pharma, the military-industrial complex and Washington’s political establishment pays their bills to stay on air.  However, the Alternative media is fighting back against Big Tech censorship by creating its own platforms such as Bitchute, Gab, Telegram, Odysee and many others which is very encouraging for those who seek the truth.

Rogan’s confrontation with CNN’s Dr. Sanjay Gupta is surely refreshing to see.  Humanity needs more exposure to the truth rather than the MSM’s lies that saturates television networks with propaganda especially in the West, so thumbs up to Joe Rogan who deserves nothing more than praise for standing up to a propagandist who represents one of the worst television networks in the world and that is CNN.

Timothy Alexander Guzman writes on his blog site, Silent Crow News, where this article was originally published. He is a frequent contributor to Global Research.

Featured image is from SCN

The original source of this article is Global Research

Timothy Alexander Guzman is an independent researcher and writer with a focus on political, economic, media and historical spheres. He has been published in Global Research, The Progressive Mind, European Union Examiner, News Beacon Ireland, WhatReallyHappened.com, EIN News and a number of other alternative news sites. He is a graduate of Hunter College in New York City.