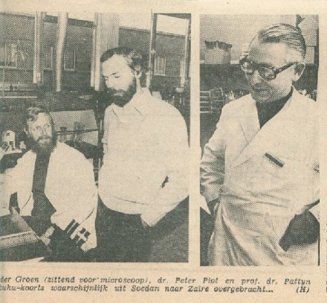 Belgian scientists Guido van der Groen, Peter Piot and Stefaan Pattyn in Congo. What did they do in Congo before the first Ebola erupted?

On June 28, 2017, the Brussels Times reports of an international team, including scientists from the University of Antwerp and the Royal Belgian Institute of Natural Sciences, flying to track the Ebola virus in the Democratic Republic of Congo.

According to the newspaper, the trip is at the request of the Congolese authorities, and the scientists will be heading to the remote province of Bas-Uélé (northern Democratic Republic of Congo) in order to study the origin of the Ebola epidemic that struck this region last May, said the University of Antwerp in a statement. The epidemic has meanwhile been suppressed.

The National Institute of Congolese Biomedical Research has set up an international team to determine the source of this recent epidemic. “This Congolese institute has also made contact with the University of Antwerp”, explains the biologist, Herwig Leirs.

The researcher will fly to the DRC on June 28 for three weeks with two other Belgian scientists, Erik Verheyen and Sophie Gryseels. Erik Verheyen, a member of the Royal Institute of Natural Sciences, has been collaborating with the University of Kisangani (north-east) for many years and is familiar with the region and its fauna.

Sophie Gryseels visited Guinea in 2014 when it was struck by a major Ebola epidemic. She analyzed the blood and urine samples of patients infected with the virus for a month in a mobile laboratory.

The three Belgian scientists will collect samples of mammalian tissues such as bats, rodents, and shrews, as well as bushmeat.

It’s shocking that such a misleading article will appear in The Brussels Times when almost every African nation and part of the world knows that Ebola is a bioweapon and the Belgian government was responsible for the first Ebola outbreak in the country.

The Ebola virus has nothing to do with mammalian tissues, bats, rodents, or bushmeat. Decades before and after independence Africans live with bats, monkeys and eat bushmeat but Ebola didn’t kill anyone, therefore, the Belgian scientists or the government mustn’t use the media to mislead people and suppress the right information of the re-emergence of Ebola in Congo.

It baffles us more to read further that the Congolese government invited the scientists into the country for that research. The Belgian government simply wants to cover up their crimes and erase anything linking to their collaboration with the US government to commit the medical crime.

It will be recalled that on June 12, 2017, this health blog published an article entitled Russia accuses Bill Gates of infecting Congolese villagers with Ebola following the Russian government’s accusation in May 2017.

The interesting part of the story is: After the Russian leader’s accusation in May 2017, an international team, including scientists from the University of Antwerp and the Royal Belgian Institute of Natural Sciences, flew to track the Ebola virus in the Democratic Republic of Congo in June 2017. Then on July 2, 2017, the World Health Organization declared Congo Ebola-free.

Continue reading: The secret behind the tracking down of Ebola in Congo by Belgium scientists