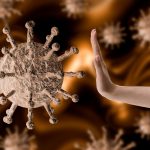 (NaturalHealth365)  The origin story of the novel coronavirus, SARS-CoV-2, has been uncertain throughout the pandemic, ranging from a bat-to-human jump in the environment (so-called zoonotic transmission) to a leak, accidental or otherwise, from the Wuhan Institute of Virology (WIV) in China.

But recent documents sent to the Inspector General of the U.S. Department of Defense (DoD) add an alarming twist to the controversy: that the COVID virus may have been bioengineered as a bioweapon.

Was the SARS-CoV-2 virus bioengineered in China – with financial backing from American researchers?

Stating that the original intent and details of this research “have been concealed since the pandemic began,” Major Murphy claims that “SARS-CoV-2 [COVID-19] is a [deliberately virulent] American-created recombinant bat vaccine, or its precursor virus.”

The goal of this bat virus and vaccine research, he says – which was funded in part by the U.S. government and conducted in part by American scientists – was to “innoculate bats” in Chinese caves with the lab-created vaccine in order to prevent a future coronavirus pandemic.  But the resulting SARS-CoV-2 virus could also have potential as a bioweapon, Murphy says.

The DEFUSE research proposal was apparently rejected because of its dangerous nature as “gain of function” research, although it’s unclear how much of this or related research was ongoing in Wuhan due to the efforts of the NIH and EcoHealth Alliance.

At this point, evidence supporting the argument that the COVID-19 virus was purposefully bioengineered as a bioweapon is inconclusive, although fact-checkers are likely to suppress any attempts to explore such questions further.

NIAID director warned at the beginning of the pandemic that COVID virus originated from lab; fact-checkers push back

However, this isn’t the first example of pandemic theories that are soundly suppressed by the media yet possibly truthful.

Many will recall that in the summer of 2021, evidence came out allegedly showing that Dr. Anthony Fauci, director of the National Institute of Allergy and Infectious Diseases (NIAID) and Chief Medical Advisor to the President of the United States, was warned at least as early as February 2020 of the possibility that the SARS-CoV-2 virus originated from a research lab in Wuhan, China – not from a “wet market” as he and other officials insisted.

In an email obtained via the Freedom of Information Act and made initially public via BuzzFeed, American virus researcher Kristian Andersen of Scripps Research in La Jolla, CA, wrote to Dr. Fauci on February 1, 2020, that “the unusual features of the [novel coronavirus] make up a very small part of the genome (<0.1%) so one has to look really closely at all the sequences to see that some of the features (potentially) look engineered.”

Andersen continued that he and his colleagues “all find the genome inconsistent with expectations from evolutionary theory,” but that “there are still further analyses to be done, so those opinions could still change.”

If and when more information comes out about the true origin (and possible intent) of SARS-CoV-2 and any subsequent suppression of the truth about the origins, then we can only hope we will see all responsible parties held accountable.

The post COVID bioweapon was made in China, financed by U.S. researchers, Pentagon documents reveal appeared first on NaturalHealth365.