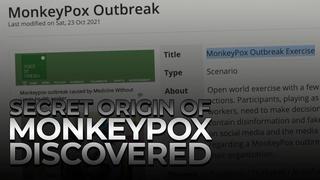 (Natural News) Monkeypox, a very mild contagious disease that deserves no panic whatsoever, is reportedly spreading across the world among attendees of a gay pride gathering of 80,000 people in Gran Canaria.

As The Sun (UK) reports, “The Canaria Pride festival, held in the town of Maspalomas between May 5 and 15, has become a hotspot for the monkeypox outbreak, reports El País.”

It turns out that engaging in gay sex activities with thousands of strangers spreads disease. (Who knew?) Even the WHO now says monkeypox is spreading mainly through sexual contact among gay men.

“Many known patients are gay men who were tested after going to STI clinics, the WHO said. Health chiefs warned gay and bisexual men to be on the lookout for new unexplained rashes,” adds The Sun. “Cases have now been detected in Israel, Norway, Australia, Portugal, Spain, Belgium, Germany, France, Netherlands, Sweden, Switzerland, the United States and Canada.”

But monkeypox presents virtually zero risk to the world. The media hysteria surrounding the topic is just the latest effort to try to spread fear and panic in order to push — you guessed it — the inevitable monkeypox vaccine that will be forced onto everyone if they can conjure up enough panic.

Anyone dumb enough to fall for this latest “outbreak” hysteria is dumber than a monkey, of course. Among primates on planet Earth, human beings are the only species dumb enough to poison their food supply with pesticides, mass murder their own offspring with widespread abortions, and inject themselves with genetically altering experimental “vaccines” that cause infertility and death. Even rats aren’t stupid enough to engage in those practices… it takes an obedient human progressive to be that stupid.