Guanajuato: 25 Dead, Many Wounded in 24 Hours of Violence

Yaqui for Borderland Beat from: Aristegui

Guanajuato: violence leaves 25 dead and 12 injured in less than 24 hours

The State Prosecutor’s Office confirms that in conjunction with the Mexican Army, it has carried out operations for the execution of searches in the Laja-Bajío area.
By Javier Bravo
Guanajuato Clashes, massacres, operations and roadblocks. The Bajío area has become the common scenario of overflowing violence, which this time has its epicenter in the municipality of Juventino Rosas that was virtually paralyzed in its daily activities, as well as fenced in its entrances. 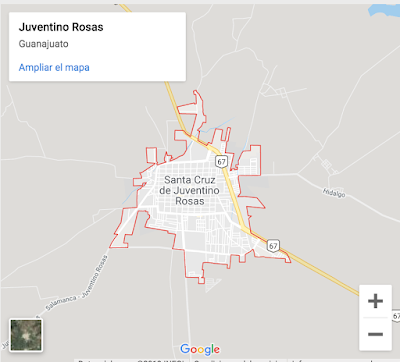 Everything was framed in a day that left at least 25 dead and 12 injured , among the injured is  an element of the National Guard. The events were distributed in the municipalities of León, Apaseo el Grande, Apaseo el Alto, Celaya, Irapuato, San Francisco del Rincón, Salamanca, Cuerámaro, Yuriria, Cortazar, Villagrán, Salvatierra and Comonfort .
All this motivated an intense police mobilization with elements of the State Public Security Forces and federal forces, which, according to the first citizen reports, were concentrated in the municipalities of Villagrán and Juventino Rosas . In fact, the latter municipality was fenced.
The information portal Ágora broadcast a video that was taken this morning by a driver. In this one you can see burned vehicles, police mobilization and an intense aerial mobilization.
This morning, the director of the Juventino Rosas Police Department, Gerardo Pérez Gómez , confirmed the main blockade at the exit to Celaya in both directions, since since the morning of Wednesday two passenger trucks were stationed and burned on the road .
The first block was at the height of the community of Franco Tavera and the other at the height of the “Chihuahuita bridge”.
It was also reported that at night there were clashes between criminal groups that would have included explosive detonations.
Even, several educational centers announced the suspension of classes , while hundreds of workers who move to their jobs in Celaya returned to their homes to take shelter, after being stranded on the road this morning.
Shortly after 10 in the morning, the State Attorney General’s Office informed in a statement that they carried out an operation together with elements of the Army in the Laja-Bajío area, to execute “several judicial orders”, with which they insured vehicles, drugs, firearms and useful cartridges. They did not confirm arrests.
They argued that these actions are due to investigations that resulted from the crimes that occurred in recent days.
“Information was obtained that warned that several buildings were used as ‘safe houses’ and where a large number of illegal objects were stored (…) when gathering the evidence, they went to the judge to request the judicial orders, which were granted, ” said the Prosecutor’s Office.
They confirmed that as part of the deployment, the homes were entered, where vehicles have been secured with reports of theft and alterations, doses of various drugs, long and short firearms and hundreds of useful cartridges of various calibers.
They added that precisely in the Laja-Bajío area, the FGE and the Army maintain the operation, to continue executing the judicial orders whose results, they indicated, will be reported during the day. 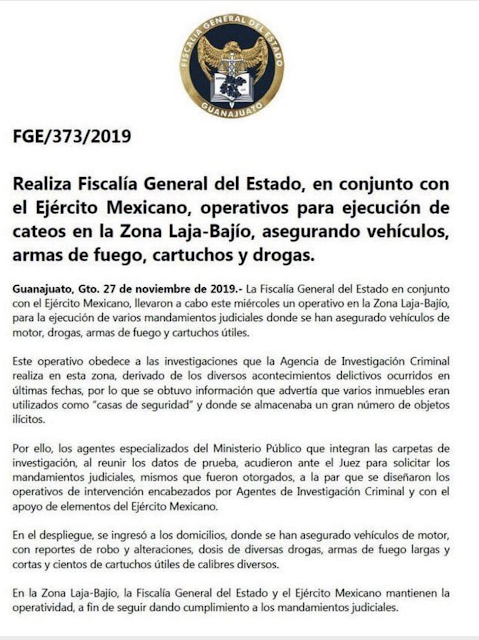 Source: http://www.borderlandbeat.com/2019/11/guanajuato-25-dead-many-wounded-in-24.html
BeforeItsNews Announcements
Step 1: Get the Telegram App & Get Stories Direct to Your Phone or Computer Without Censorship! Get the Telegram App in the App Store or at
https://telegram.org/