Guerrero, Mexico: The Kids Being Trained and Armed to Fight Mexican Cartels 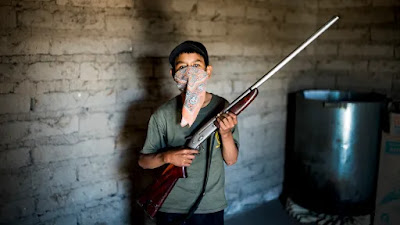 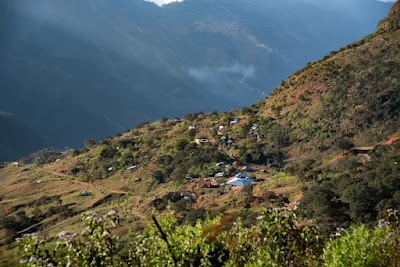 In January, 10 musicians from an indigenous village were ambushed as they returned home from playing a concert. The bodies of the men, between the ages of 15 and 42, were found in two vans, their bodies burned beyond recognition.
Government officials blamed Los Ardillos for the attack and described it as “an act of vengeance,” referencing the shoot-out a year earlier.
The murders prompted the militia to hold a march, where they paraded the boys with guns before local news outlets. It was an escalation of a strategy they had utilized months earlier when they uploaded videos to social media of children training with sticks. The Mexican news giant Televisa broadcast images from the march, and the story landed on the front pages of newspapers around the country.
Government officials and human rights groups condemned the group, accusing it of exploitation.
“It doesn’t matter if the recruiting is being done by criminal groups, the military, or indigenous self-defense groups; it’s a crime,” said Juan Martín Pérez García, executive director of REDIM, a collective of children’s advocacy groups in Mexico.
The display of armed children is disputed even within the militia, with accusations of rogue actors using the kids as propaganda.
But the strategy has spurred action. The government deployed military forces to help shore up security, and the governor met with community leaders to discuss their demands.
“Now that we show off the children, the governor is coming to our community and meeting with us. But if we hadn’t done that, the governor would never have come,” said Sánchez Luna, the militia’s founder.
Tensions between the indigenous communities and the government extend back to the 1990s, said Abel Barrera Hernández, a Mexican anthropologist and director of the Center for Human Rights of the Mountain of Tlachinollan in Guerrero. The communities refused to participate in a nationwide land reform program, because they viewed land as community-owned instead of private property.
That fueled agrarian conflicts and long-standing feuds that have contributed to the violence today. Barrera said the government ignored the conflict and left the indigenous communities to fend for themselves.
“No one takes notice when the children are illiterate and malnourished. No one cares until they see children with guns.”
“No one takes notice when the children are illiterate and malnourished. No
one cares until they see children with guns,” he said. “This is a strategy, a cry of despair before the inaction, indolence, and racist attitudes of the government authorities. The innocence has been snatched from these children and they have to wake up in this nightmare.”
The line between innocence and adulthood is increasingly blurred. Between exercises with the guns, the boys hang around the basketball court and play with yoyos, killing time before they go to the fields to take care of their goats and cows. The 15-year-old boys have started going on night patrols with the other men in the community.
Luis has yet to shoot a gun at a person, and he said if his village is attacked, he plans to stay back at home to defend his mom and sister. “They taught me that weapons aren’t to be used to rob people. It’s only to protect ourselves if the criminal group shows up.”
He said he misses going to school, especially his math classes. He was learning long division. He wanted to become a teacher or a doctor — he’s not sure which, perhaps both. Those dreams are gone. “If it weren’t for the crime, I would continue,” he said.
Luis rarely leaves his house without his gun, wary of being kidnapped or killed at any second. “I like to take care of my goats. And to play basketball,” he said. “I still feel like a kid, even though I’m carrying a weapon.”
(Jika Gonzalez/VICE News)


Source: http://www.borderlandbeat.com/2020/02/guerrero-mexico-kids-being-trained-and.html
BeforeItsNews Announcements
Step 1: Get the Telegram App & Get Stories Direct to Your Phone or Computer Without Censorship! Get the Telegram App in the App Store or at
https://telegram.org/