ocaine – brought from Colombia and Bolivia – fell almost in half 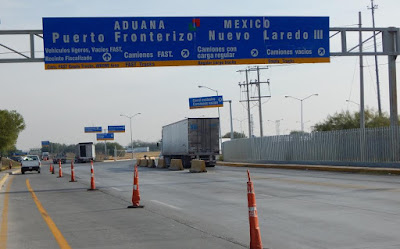 The border between Mexico and the United States has been sealed as a result of covid-19, affecting the main sources of income of Mexican drug cartels: the smuggling of dollars and narcotics have literally dried up in the last month, just like illegal human trafficking, as the quarantine has become more stringent.
According to data from the Office of Customs and Border Protection (CBP) between February and March, when the emergency began and Washington ordered the border to be closed to non-essential traffic, seizures of drugs and cash;  The latest drug figures seized by CBP reflect an unprecedented drop in the transfer of illicit substances such as cocaine, fentanyl, methamphetamine and heroin, although a slight increase was detected in the smuggling of marijuana.
Taken together, the four drugs, whose flow has decreased, represent the bulk of the income of the Mexican cartels. The reduction in drug flows coincides with the increase in the number of US military and police personnel on the border.

In March, when the pandemic began to hit both Mexico and the United States alike, the Pentagon ordered the deployment of an additional 500 military personnel to reinforce the more than 20,000 elements that the Border Patrol already has in the area, where vehicular traffic —And hidden mule crossings in normal flow — have been dramatically reduced.
In the midst of a health crisis, “it is not easy for cartels to hide their shipments,” said Victor Manjarrez, a former chief of the Border Patrol in El Paso, Texas, and Tucson, Arizona, a few days ago. The figures go in that direction: shipments of fentanyl decreased 8.6 percent and went from 126 kilos in February to 115.2 the following month, while methamphetamine followed the same trend: traffic fell 31.3 percent, from 6.1 tons seized to 4.2 in the same period.
For its part, cocaine – brought from Colombia and Bolivia – fell almost in half, from 5.8 tons in February to 2.9 in March, that is, a drop of 49.2 percent. Heroin also saw a contraction in its flows and seizures of 16 percent; it went from 177.3 kilos intercepted in February to 149.2 in March. Another stream that has also dried up is that of cartel profits.
According to CBP figures, cash forfeiture was reduced 61.3 percent in March; in February, 14 million 169 thousand dollars were seized against only 5 million 486 thousand in March.


Source: http://www.borderlandbeat.com/2020/05/cartels-feeling-crunch-by-border.html
Before It’s News® is a community of individuals who report on what’s going on around them, from all around the world.