Yaqui for Borderland Beat from: AFN 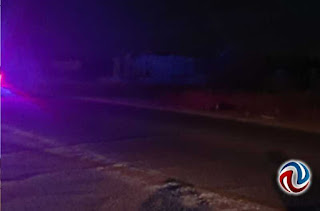 Police officers in Mexicali shot and killed a man who killed two people with a firearm, who took with him an 11-year-old boy while fleeing.

The events occurred when a family meeting degenerated into a dispute in the Valle de las Misiones neighborhood, after 10 p.m. on Tuesday night.
The aggressor, José Luis Arroto Martínez, 35 years old, shot to death his brothers-in-law Noé Rolando, 36, and Pedro Martín, 38 years old. After having fired the shots, José fled while he was followed by family members to catch up with him, while they reported by phone to the C4.
It was on a vacant lot in the Sánchez Taboada subdivision on the road to Santa Isabel that they caught up with him. When he was surrounded by the officers, the individual seized an 11-year-old boy who was the son of one of the deceased and placed the gun to his head.
The policemen managed to persuade him to release the minor, however, he began to fire shots at the agents, and to preserve the life of the minor and themselves, they shot him dead.
The assailant carried a 9mm black Smith & Wesson pistol. Experts and municipal authorities arrived at the scene for the corresponding investigations.  No motives or names have been released.

Source: http://www.borderlandbeat.com/2020/06/mexicali-police-shoot-murderer-to-death.html
Before It’s News® is a community of individuals who report on what’s going on around them, from all around the world.