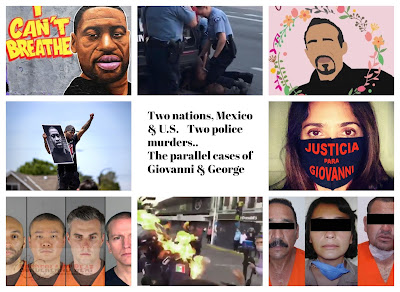 The parallel murders of George Floyd and Mexican bricklayer Giovanni López, at the hands of police while being arrested, is remarkable.

Not much is being heard in the U.S. press about the death of Lopez, they are more concerned with reporting on European protests, if reporting anything other than the murder of Floyd.
Floyd and Lopez’ murders were a month apart.  Both men were stopped in suspicion of low-level crimes.  Floyd, allegedly, for attempting to pass a 20-dollar counterfeit bill.  Lopez for not wearing a Covid-19 face covering. 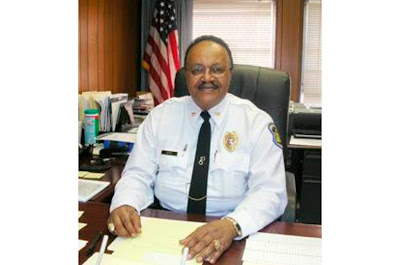 Both men were videotaped during the arrests by standers.  Both murders were at the hands of multiple police officers.  Both murders had witnesses who begged the police to stop.
Both murders sparked massive protests, with looting and violence.  In Mexico a motorcycle policeman was drenched with   accelerant and set afire.
In the U.S,. a retired St Louis police captain was shot 9 times and killed by looters.  Captain David Dorn, a 30 year police veteran, was a black man.  There seems to be little press outrage to his murder.  Being black seems to matter only it one is not a police officer.
Both incidents had organized groups infiltrated peaceful protesters, whose agenda was to spark violence, loot and destroy.  They wrote graffiti of anarchy and anti-government slogans. They came prepared with “weapons”.
Yesterday, 3 suspects were presented in the death of Giovanni, by the governor of Jalisco, where the killing transpired.  It was his strict mask rule that some say set off the tragic incident.
Governor Alfaro, who was not at the murder site, is adamant it had nothing to do with enforcing his mask rule.  The family, who was there, begs to differ.  They also have said for a month that the government asked for all the video footage and offered 9k USD not to release it.
Today the funeral of Floyd.  What comes from his murder will determine if he died in vain.
IMO there is much more to the story.  I believe it was personal. The killer and Floyd knew each other, worked security together, I am hopeful in the end we will know.
And yesterday we begin the legal process in Mexico by the presentation of the so-called killers of Giovanni.  I say so-called because Mexico is a land of props.  One never can believe the “facts” in these cases without strong supporting evidence.
There is much I am interested, in addition to the obvious, I want to know more about those infiltrator groups who being violence and never waste a tragedy to promote anarchy, violence, steal, destroy and obstruct. They were in Ferguson.  They were in Berkeley; they somehow appear as if by  magic at every protest.  Who or what is behind these groups?  Are they international as they seem to be?
As a woman who did her fair share of protesting back in her day, I know when the focus is diverted to bad actors, the good purpose vanishes~
La Silla Rota
The governor of Jalisco , Enrique Alfaro , unveiled the face of three of the alleged murderers of Giovanni Lopez . Through his Twitter account, the Jalisco  governor shared the image of the detainees, assuring that they are municipal police of Ixtlahuacán de los Membrillos , without giving more details.
“My commitment was to do everything in my power so that there is … These three people belonged to the municipal police of Ixtlahuacán de los Membrillos, which we have taken control of. Today they are detained for their alleged participation in the death of Giovanni López. 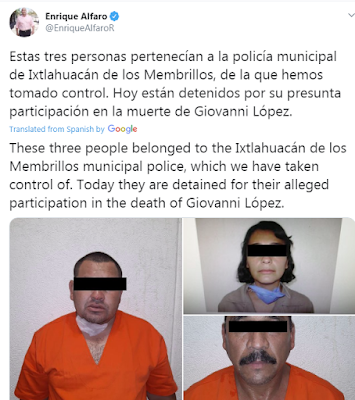