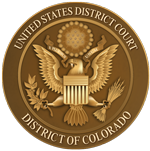 DENVER – United States Attorney Jason R. Dunn announced that Carlos Eduardo Lopez-Romero, age 25, a Mexican national in the United States illegally, was sentenced to serve 180 months (15 years) in federal prison, followed by 5 years on supervised release, for methamphetamine and heroin trafficking, possession of a firearm while trafficking drugs, and unlawful reentry after a prior deportation.
The Denver office of the Federal Bureau of Investigation (FBI) joined in today’s announcement. According to the stipulated facts contained in Lopez-Romero’s plea agreement, the defendant and at least two other individuals frequently dealt large quantities of methamphetamine and heroin in Denver and Lakewood, Colorado.
From November 2018 to February 2019, the defendant sold approximately five pounds of methamphetamine and one pound of heroin to a FBI confidential human source over the course of six transactions. A search of a storage unit which belonged to the defendant resulted in the seizure of an additional six pounds of methamphetamine, three pounds of heroin, two semiautomatic pistols, and ammunition. The defendant is a native and citizen of Mexico, born in Tepic, Nayarit, Mexico.
The defendant was removed from the United States on November 18, 2013, through San Isidro, California. Shortly after his removal, he knowingly reentered the United States near Tijuana, Mexico/San Diego, California, without receiving the consent of the proper legal authority to reapply for admission to the United States.
“Lopez-Romero came to the United States illegally just so he could become a drug trafficker to American citizens,” said U.S. Attorney Jason Dunn.  “But the FBI caught on, and now he will spend 15 years in federal prison and face deportation after he pays his debt to society.” “The FBI will continue to work closely with our federal, state, and local law enforcement partners to combat illegal drug trafficking throughout Colorado,” said FBI Denver Special Agent in Charge Michael Schneider.
“Today’s lengthy sentence of Lopez-Romero should serve as a reminder to those who prey on our communities – this criminal activity will not be tolerated and those who participate will be brought to justice.” Lopez-Romero was remanded into custody at the conclusion of his sentencing hearing.  This prosecution was part of the Organized Crime Drug Enforcement Task Force (OCDETF) program.
The OCDETF program is a federal multi-agency, multi-jurisdictional task force that supplies supplemental federal funding to federal and state agencies involved in the identification, investigation, and prosecution of major drug trafficking organizations.  The principal mission of the OCDETF program is to identify, disrupt, and dismantle the most serious drug trafficking, weapons trafficking, and money laundering organizations, and those primarily responsible for the nation’s illegal drug supply.
Carlos Eduardo Lopez Romero… by MX on Scribd