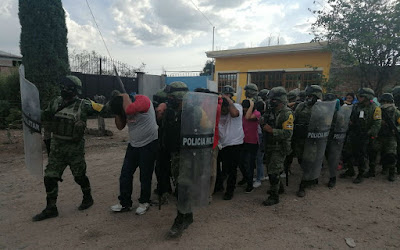 This Friday, at the security meeting, the Secretary of the Interior, Olga Sánchez Cordero, released a theory that exists in the Judiciary about the search, which states that when there is information that a home is committing an unlawful, you can intervene, said President Andrés Manuel López Obrador.
The aforementioned, after it was announced that the release of several members of the Santa Rosa de Lima Cartel was due to an alleged search without a warrant, since it was late. (judicial citing procedure errors and violation of civil rights is the most common method of releasing arrested organized crime leaders and influential members)
Regardless of what time the order came, when the police and the National Guard entered, what they found is drugs and money; and yet, another criterion was applied.” he said during the morning conference.
Today the head of Segob will send a letter to the president of the Supreme Court of Justice of the Nation (SCJN), Arturo Zaldívar.
“According to this thesis, liability could be established, but that will already correspond to the Federal Judicial Council and the competent authorities of Guanajuato; and, if there are reasons for those responsible to be investigated and punished, let it be done.” he added.
The federal president also indicated that there are versions that what happened in the Irapuato annex has to do with the fact that in these rehabilitation centers, which are not registered,  are members of criminal gangs.
“A serious, serious problem continues in Guanajuato. We are going to continue helping to protect the people of Guanajuato. The National Guard, Secretary of National Defense, Secretary of the Navy, Secretary of Security have instructions to be vigilant, pending;
It is a matter of gang confrontation and it is also something that has to be seen as a problem that was allowed to grow, whether due to irresponsibility or collusion or was omitted or tolerated and grew a lot, so much so that it has a social base and that is not known. Build overnight, that takes time, “he added.